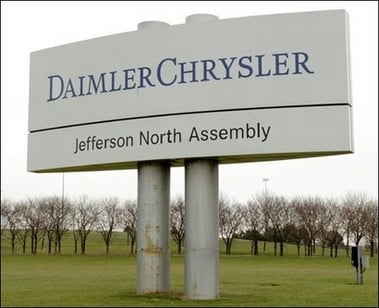 Originally published in 1975, this article was an answer to Chrysler's plans to sack thousands of workers in Britain. It clearly posed the demand for nationalization under workers' control and management. The fact that over 30 years later we are yet again faced with the same situation, highlights our point that there is simply no solution to the problems of working people within the narrow limits of capitalism.

We are told that we can be part of the "team" if we play by the rules – but the bosses change the rules whenever they want! While the poltiical and economic conditions in Britain in the 1970s were different than they are here in the U.S. today, the fundamental problem remains exactly the same. The bosses will always put their profits above the interests of the workers and society as a whole. They are no longer even investing in productive capacity and exploiting new workers in order to make their profits, but rather, get their profits by laying off tens of thousands of workers, asset-stripping, speculating on the stock market, slashing pensions and health care benefits, cutting corners on safety, and on and on. Under capitalism, the "song remains the same". Workers need a new tune – nationalization of the key levers of the economy under democratic workers' control!

The Labour Government has just given the multinational Chrysler bosses a sackful of presents for Christmas, costing up to £162.5 million. But instead of sharing some of their presents with the workers, the deal agreed by the Government and Chrysler has given 8,000 of them—the sack!

Instead of nationalising Chrysler, as even Chrysler boss Riccardo suggested, the Labour Government has chosen to break another election Manifesto pledge by doling out more money to prop up a capitalist firm which has bled millions of dollars from the workers, without taking any control over its future.

Meanwhile the jobs of thousands of railway workers are threatened by proposals to slash back railway mileage from 11,000 to 4,000 miles—less than in the 1840s!

The Chrysler crisis is just one more example of the sickness of British and world capitalism. The capitalist press, as usual, is trying to present the case as if it is the fault of the workers in the car industry. Productivity per worker, blurts out the papers, is only half what it is on the continent.

They do not say that with a lower rate of profit and paying far higher wages, West Germany's investment is twice as great as that of the car industry in Britain.

It is investment in new and better machinery which is the secret of the higher productivity of West Germany, Japan and other rivals in the car industry over Britain.

In this as in the motorbike and other industries, British capitalists and Financiers very short-sightedly skimped investment, making do with antiquated equipment and machinery in order to increase profits. The City of London Financiers and big business firms preferred to invest their money abroad in order to gain greater wealth. Their 'patriotism' is no match for the jingle of cash.

Even this year in the depth of recession when industry is working at less than 70% of capacity more than £2,000 million will be invested abroad, according to official Government figures. This, while investment in manufacturing industry is falling below the miserable figures of the last 10 years.

Investment overseas, in property speculation and in service industries, has led to the decline of British industry and the loss of 1 million jobs in 5 years. One office block in the City of London is worth more than British Leyland, employing 250,000 people!

Thus the decisive section of the ruling class became speculative parasites, abandoning the only progressive feature of capitalism in the past, the development of real wealth producing capacity. They have forgotten the elementary role of capitalism in their greed for gain. Not only the motor industry but the entire British industry is in the same parlous plight.

Big business is now screaming for cuts in manpower, cuts in living standards, cuts in social services, railways, steel and practically every industry. Capitalism is responsible for the crisis in industry, and all the other ills, including the terrible scourge of unemployment.

Now the capitalists and their Tory puppets in Parliament are baying for 'lame ducks' to go to the wall. Let Chrysler close down and add another 50,000 workers in this firm and ancillary firms to the total on the stones! The accident that Linwood is involved and the pressure of Scottish Labour has forced the Labour leaders to abandon this approach. But they cannot save the greater part of Linwood without saving the Coventry workers as well.

Some of the 'Manifesto' right-wing group are using Tory arguments in demanding that Chrysler, which is in competition with state-owned British Leyland, should be allowed to go to the wall. They point to the queue forming for state aid in critical industries including, possibly, Vauxhall's and even Ford's.

The Tribunites in Parliament are demanding, as the Manifesto of the Labour Government promised, that sureties and loans should be matched by an equivalent share of the equity in Chrysler. This, surely, is the absolute minimum the Labour Government should have taken, especially when matched with the sacrifices demanded from the workers in every industry.

But this is not really even a minimum solution. Chrysler's should have been nationalised ‑ in this case with no compensation ‑ and the whole of the motor industry, with compensation only on the basis of proven need.

They have made super-profits in the last 30 years, far higher than their competitors and have not re-invested the loot, but frittered it away on their greedy shareholders. They should be made to pay the penalty for this neglect, not the workers.

Take over the entire motor industry and rationalise it in the interests of the workers. Plan production and investment in all the plants as one entity and one combine. But not on the lines of bureaucratic nationalisation of steel or the railways, putting the old bosses in charge.

With control from top to bottom by the workers, there would be no sackings, production would leap forward, tapping the initiative and enthusiasm of the workers. This is the only Socialist solution in the interests of the car workers and working class as a whole.