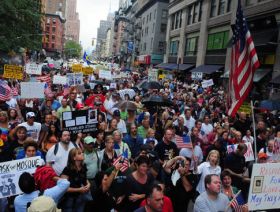 What Gingrich, Lazio, Reid and other right-wing commentators are practicing is a well known method known as “divide and rule.” Like “divide and conquer,” “divide and rule” is a way to confuse the masses, to misdirect them from seeing who their real enemies are and send them against imaginary enemies.  The richest one percent of the population owns more than the bottom 95%. In order to maintain this inequality, the richest one percent must keep the bottom 95% divided against each other and direct their anger against another target.

Therefore, they seek to pit Christian workers against Muslim workers. The ruling class wants workers to see that their lives are threatened by Islam, not by Capitalism. However, who is taking your job away? Who is cutting your pay and increasing your cost of health insurance?  Who is repossessing your home?  Is it the big corporations and banks or Islam?

Of course, the politicians are seeking votes, but they do not want to mobilize against their big business backers. They know many workers and middle class people are angry, therefore they must produce scapegoats, as in Arizona.

The labor movement must fight against any division of its ranks. A united working class is strong, while a divided class is weak. This demagogy has already led to one NYC taxi driver being stabbed by a customer who asked if he was a Muslim. More attacks could follow if the hatred continues to be spread.

The attacks of September 11 were a horrific event. However, we must remember that it was not “Islam,” but specifically the Al Qaeda group that was responsible.  This group was born of the fundamentalist anti-Soviet movement funded directly by the CIA in the 1980s. Therefore, if they want to ban something, no CIA office should be allowed for hundreds of miles around NYC, Washington D.C. and Shanksville, PA.