#Occupy LA and the Gang Question 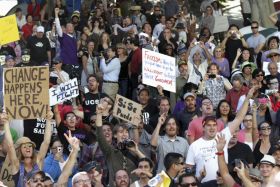 The #Occupy Wall Street movement has garnered much momentum and support among the unemployed and working class.  Among these growing numbers, especially in Los Angeles, is an increased presence of former and current gang members who are slowly developing a degree of class consciousness.  This has created a split in the unelected leadership of the #Occupy LA movement in how to approach and integrate these occupiers into the movement.

Unfortunately, the position taken is an overly-simplistic understanding and approach to the issue. The Workers International League believes that the #occupy movement must take a careful look and clear position on this matter from the point of view of uniting the working class.  A serious mistake on an issue like this could divide our movement, allowing the ruling class an unnecessary victory.

For one, it would seem that at present, the #occupy movement does not understand the complicated nature of gang membership. To say that one is a “former” gang member is often a death sentence. And for gang members who wish to distance themselves from criminal gang activity, they must often retain a surface-level attachment to the gang for the rest of their lives.  Former gang members that are too vocal about their distanced relationship to their gangs are often harassed or even killed to discourage similar activity in currently active gang members.

Furthermore, this split in the #occupy movement in Los Angeles stems from a misunderstanding and poor analysis of the emergence and nature of crime.  Any proper analysis of social, or in this case anti-social, behavior must take into account not only the human individual, but the environment as well.  Taking environmental factors into account does not excuse crime, especially violent crime, but helps establish an objective understanding of it.  Without a proper understanding of the root of crime, all attempts at prevention and reduction are like so many swings against an endless game of “whack-a-mole.”

A Marxist analysis of the phenomenon of criminal gangs and violence begins with the premise that the root cause is the fundamental inequality and insecurity imposed upon workers by capitalist society. High unemployment, poor housing and lack of access to quality education is the bleak reality faced by millions of workers across the U.S. In the absence of a bold leadership mounting a mass struggle against these inequalities, many young workers turn to gangs.

The United States now has more incarcerated citizens than any other industrialized nation, even more than China. Much of this incarceration is due to the absurd policy of the so-called “War on Drugs.” This policy treats drug users as if they were an enemy to be reviled and socially punished, as opposed to addicts requiring treatment and victims of a rampant public health problem.  Laws and policies like this are used for the sheer purpose of criminalizing a layer of the working class  We should therefore not be too quick to judge disillusioned and de-classed workers who have grown in environments where leadership was sparse and economic opportunities were extremely limited. As the class struggle heats up, many of these individuals will be drawn into the ranks of the broader working class’ struggle to change society.

For instance, the disparity in crack and powder cocaine sentencing is just one prominent example of how our legal system is used to disproportionately incarcerate workers and the poor. In actual fact, the capitalist system itself is the creator of crime and supports an entire network of underground drug economies, providing the funding for drug cartels and common street gangs, which generate the bulk of their revenues through drug sales.

But it is not just drug usage that is used to criminalize and divide the working class, vagrancy laws have also historically been used to clearly mark natural resources and public spaces as private property in the hands of an affluent and aristocratic minority.

This abuse of law can be traced from the usage of British colonial laws in East Africa to reap enormous profits for British shareholders on the backs of exploited Africans, to the application of anti-graffiti laws to jail young artists seeking to subvert the erosion of public spaces by claiming billboards, business buildings, and parks as communal property worthy of public art rather than advertising. Even the “liberal” city of San Francisco recently passed a law banning the homeless from sitting on public sidewalks. This is the absurdity of capitalist law at its extreme.

The #occupy movement has a partial understanding of this unfair use of law, as shown by their targeting of Wall Street executives and bankers for economic crimes, crimes that are widely and openly committed, but rarely prosecuted. It is more and more apparent that law in America is only capitalist law, preserving capitalist profit and property at any expense, even at the cost of human lives. After all, the capitalist system preserves itself through the use of laws passed and enforced in the narrow interests of the minority, not in the interests of the working majority. Not long ago, Marxists in America were also considered “criminals;” unionizing was “criminal;” and fighting against systemic oppression was deemed to be “criminal.”

Any deviance from this capitalist rule of law is registered as a crime, all while the capitalists dangle illusory carrots of fame and fortune before the hungry eyes of the working class, knowing full well that access to these goals is restricted to the rich and to those that grovel before them. It is no surprise then that this system breeds resentment.  It is no surprise that disillusioned workers and young people recognizing class stratification lash out at any imaginable enemy.

As Marxists we understand that gang wars are counterproductive and a tool of the capitalists to keep disillusioned workers divided and fearful of one another. Individual or organized gang violence does not help the movement go forward and leads to innocent people being hurt or worse. But labels such as “gang member” and “former gang member” do not do enough to clarify the issue. We propose, rather, that we unite around the principle that “an injury to one is an injury to all!” We must fight together to cut across these artificial divisions. The movement must keep its focus on the 1% and this means united action!

Bloods, Crips, Mara Salvatruchans, and all other active gang members must recognize that they are murdering one another for control of an underground economy, an economy that has done nothing to raise them up, to support their families, or protect their communities. The movement has the potential to actually reduce crime by giving people real hope that they can better their lives through transforming society.

We invite all gang members to read and study Marxist analyses of history, current events, and of “crime.”  When viewed through a class-conscious lens, the superficial divisions used as justification for decades of bloody street wars will wither away. Workers must recognize that our one common enemy is capitalist oppression. Join the WIL and unite to fight against the capitalist system that destroys and divides us!