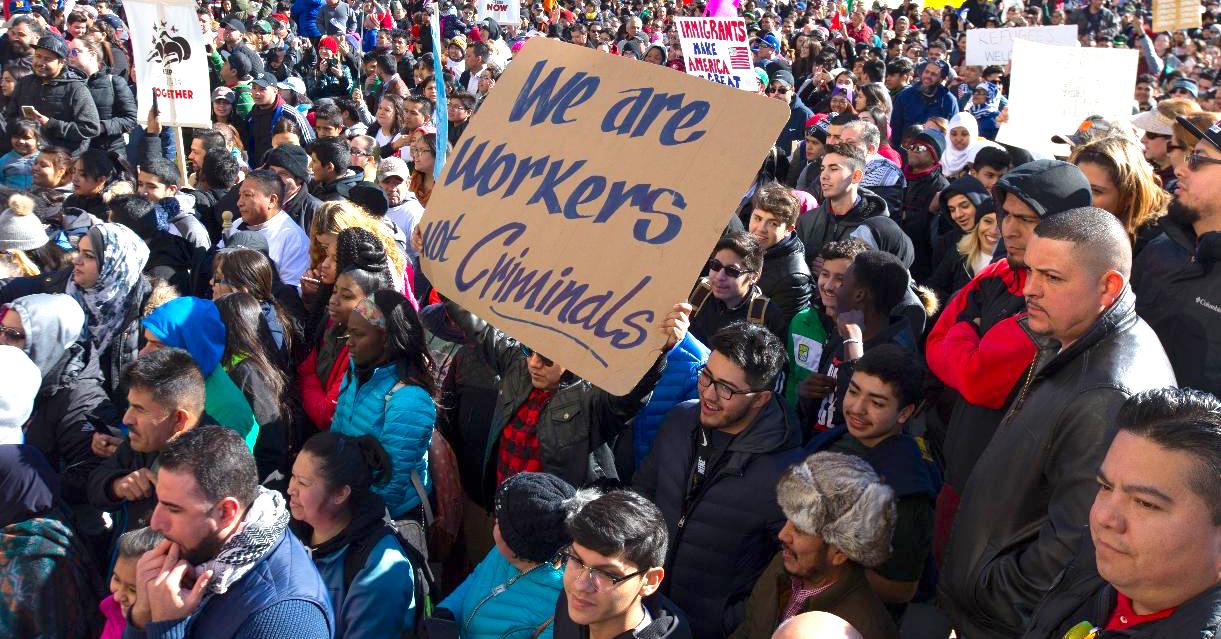 Capitalism is unable to deliver lasting stability or prosperity for the majority of the world. Decades of direct and indirect intervention and economic blackmail by US imperialism have caused displacement and emigration on a massive scale. In Latin America, as an example, the lack of jobs and economic security, US-led “War on Drugs,” propping up of right-wing governments, and strangulation of any struggle for revolutionary change, have sent living conditions spiraling downward, forcing many to flee. These are not “leeches,” “freeloaders,” or “terrorists,” but ordinary working people trying to save and improve their families’ lives.

There are 43.3 million immigrants, both documented and undocumented, living and working in the US. A year into his administration, Trump’s promise to deport unprecedented numbers of undocumented immigrants has become a living nightmare for millions. The merciless onslaught by Immigration and Customs Enforcement (ICE), the main arm of the Department of Homeland Security, is ripping families apart, targeting immigrants who fled their home countries and came to the US without the “proper” paperwork. The inhuman brutality of the bourgeois state is blatantly manifested in the methods used by ICE in their detention and deportation proceedings.

ICE carries out brutal arrests and deportations of millions of immigrant workers.

But even as the Trump administration ramps up its attacks on immigrant families, more and more people are turning their attention to the complicity of the Democratic Party. Trump and ICE would not be in a position to attack immigrants on such a massive scale had the deportation apparatus not been fortified and expanded during the eight years of the Obama administration. George W. Bush’s “War on Terror” policies were intensified by his Democratic Party successor, and with this came greater repression against working-class undocumented immigrants. As an example, 2011 saw an average of 771 weekly arrests in ICE raids, including a five-day campaign that led to the arrest of nearly 3,000 undocumented workers—the vast majority of whom had no criminal convictions and were not accused of anything beyond “illegal entry.” In the end, Obama presided over the expulsion of over three million undocumented immigrants—more than any president in US history—earning him the nickname of “Deporter in Chief” among immigrants.

The debate around DACA, the Obama-era Deferred Action for Childhood Arrivals program, has further revealed the cynical hypocrisy of the Democratic Party. The program offered work permits and renewable two-year deferred action from deportation for 800,000 undocumented immigrants brought to the US as children, also known as “Dreamers.” In September of 2017, the Trump administration initiated plans to phase out the program, putting Dreamers’ futures and even lives in peril, at risk of being deported to countries many of them have never known.

When the White House announced its plans to end DACA, Democrats challenged the process, but in reality, merely used Dreamers as a bargaining chip. Senate Minority Leader Charles Schumer led Senate Democrats to force a shutdown by refusing to support a spending measure that did not address Dreamers. But less than three days into the shutdown, Schumer and other Senate Democrats agreed to the spending deal they had previously rejected, taking on faith Republicans’ promise to take up immigration at a later time. The same old story of the Democratic Party played out once again: fake “worker-friendly” bravado, capitulation, and a knife in the back of the working class. Immigrant rights activists saw through this, staging a protest at Schumer’s house in New York.

If the “lesser evil” Democratic Party genuinely cared about immigrants, it would not have allowed its own president to deport millions. Nor would it support the predatory policies and imperialist ventures that force desperate people to seek a better future in the US. It would have used its control of Congress and the White House from 2008 to 2010 to grant immediate, universal, and unconditional amnesty for all immigrant workers and their families. Instead, they only ramped up the repression.

Many on the left call for abolishing ICE, the repressive agency vigorously attacking families. However, shutting down an individual agency will not solve the problems faced by undocumented immigrant workers. The entire state apparatus and legal framework of capitalist rule must be replaced by a workers’ state and government. The question of who is or is not authorized by the bourgeois state to live and work in a particular place is an entirely arbitrary distinction. The labor movement must fight for class unity and genuine equality for all, no matter where they were born. The IMT fights for the immediate and unconditional legalization of all undocumented immigrants, full rights and amnesty for immigrant workers and their families, and an end to all racist immigration and asylum controls, not to mention, quality jobs, healthcare, education, and housing for all.

Armed with militant, class-struggle policies and an internationalist outlook, the labor movement has the potential to become an unstoppable force against the bipartisan deportation machine of the capitalists. It is the historic mission of the working class to completely uproot capitalist society’s foundations, sweeping aside all national borders and the reactionary ideas that have allowed a small minority to rule the majority. Only the socialist revolution can establish the conditions for all workers to raise their families free from the fear of deportation and the precarity of the past.