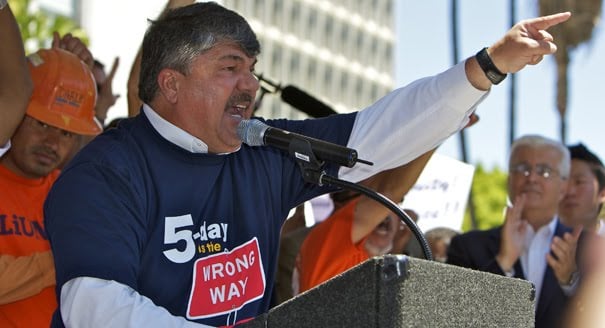 The news that you have declared the AFL-CIO’s “political independence” and will no longer automatically support the Democratic Party has spread like wildfire throughout the labor movement. On behalf of the Campaign for a Mass Party of Labor, I would like to congratulate you for taking this step. This is just the first step of many that will need to be taken in order to harness the true potential of organized labor to fight back against the bosses’ economic and political attacks.

For far too long, the parties of Big Business, and in particular the Democrats, have taken labor’s vote for granted–not to mention millions of dollars in donations and countless volunteers to get out those votes. In exchange for this decades-long loyalty, which led directly to the election of President Barack Obama in November 2008, labor has been rewarded with the political and economic equivalent of a kick in the teeth. No Employee Free Choice Act. No single payer health care. No increase of the minimum wage. No mass program of useful public works at union wages to address the problem of unemployment and rebuild the country’s crumbling infrastructure. In short, labor got zilch. Zero. Nada.

However, without a clear political lead, the assumption is that workers should keep voting for the “worker-friendly” Democrats, even when that party continues to sell workers out on one issue after another. Your declaration can change that. Your declaration of political independence is a recognition of the fact that the relationship between labor and the Democrats was like the relationship between a horse and its rider. No matter how fast labor ran or how hard it pulled for them, the Democrats kept digging in their spurs and whipping the workers harder. It was high time to buck that rider off our backs and set out on an independent course.

However, an “independent” course in the abstract is the equivalent of a kind of political limbo. It is not enough to say that the Democrats can no longer expect labor’s votes and support. Millions of workers look to their shop stewards, Local and International presidents, and to you, brother Trumka, for advice on who to vote for to defend their interests. American workers clearly know what they are against–the Republicans’ open attacks and the Democrats’ false promises of change–but when election time comes around what are they supposed to vote for?

Workers are the majority of this country, and yet we have no real voice in Washington or at any any other level of government. In my humble opinion, the only political alternative that makes sense is a mass Labor Party based on the unions. Only organized labor has the members, resources, workplace and community networks to mount a serious political challenge to the parties of corporate America.

A Labor Party would fight for living-wage jobs and unions for all. It would fight for universal health care and education, for safe housing and new infrastructure. It would fight for the repeal of Taft-Hartley along with every other anti-union law. It would fight against the bloated military budget and would bring the troops home now. It would lead the fight against racism and discrimination, and for equal rights and equal pay for our immigrant brothers and sisters, not to mention all women. It would mobilize the organized and the unorganized, and would reach out to the unemployed, retirees and the youth to fight tooth and nail against any and all cuts and concessions. It would build on the October 2nd “We Are One” rally and organize mass marches for jobs and against cuts in every city in the country. Such a party could rally millions of voters behind it and turn U.S. politics upside down. Such a party could quickly become the number one party in the country, leaving the Republicans and Democrats to fight for second place. The potential for such a party is enormous. The time to build it is now.

The need for political representation for the working class majority of this country is not a new idea. But it is more urgent than ever. There have been other efforts to form such a Labor Party in the past, including some fairly successful ones. But for a variety of reasons, these efforts have not taken off, above all because the majority of the unions remained tied to the Democrats, which inevitably led Labor with nothing to show for it. In just the last few months there have been new movements in this direction. The North Carolina Families First and South Carolina Labor Party have recently been formed and mark an important step in the right direction, but it is a drop in the bucket compared to what is needed: a nation-wide Labor Party with chapters and members in every state, county, city, and town in the country. Your declaration of political independence and your voice can make all the difference.

We launched the Campaign for a Mass Party of Labor on Labor Day, 2010 because we think this is the only real way forward for American workers. But we are a tiny organization with no full time staff and no resources to speak of. Although we think we have a powerful idea to share with our fellow workers, our ability to get this idea to them is extremely limited.

That’s where you come in. As the leader of the Pittston strike, you know the importance of class struggle trade unionism and solidarity. As a supporter of the Labor Party in the 1990s, you know how important it is for workers to have a political voice that is truly their own. You represent 11 million unionized workers and have the ear of millions of others. Through the AFL-CIO’s magazines, websites, email lists, and access to television, radio, and newsprint, not to mention Facebook and Twitter, the message of a Labor Party could reach millions.

It is true that if you issue a call for a Labor Party and energetically build it, you will lose a lot of support. You will lose the support of the Democratic Party leaders and lobbyists who have promised so much but delivered so little. You will lose the support of the Republican strategists who might cynically hope to gain from Labor’s break from the Democrats. You will be demonized in the business press, on Fox News, MSNBC, and in corporate boardrooms across America. But in exchange, you will gain the support and respect of millions of workers who have just been waiting for someone to show them the way out of our current economic and political dead end.

Corporate America wants to grind organized labor into the dust. After all, higher union wages mean lower profits–and profits just aren’t high enough! In the face of vicious attacks by both parties, American workers have shown that they are more willing to fight. With even more vicious attacks on the horizon, it is only the beginning of the fight back in the workplace and in the streets. But we also need to be able to fight back at the polls. For this we need a party of, by, and for the workers. It is my sincerest hope that you will take up the call for a Labor Party and will mobilize the millions of members of the AFL-CIO behind this effort. We in the Campaign for a Mass Party of Labor would like nothing better than to wrap up our modest campaign and throw our energies into fighting shoulder to shoulder with the rest of our union and non-union brothers and sisters in a serious, mass campaign to build such a party.