The Progressive Youth Alliance organized a National Marxist (winter) Youth School from December 5 to 7, 2014. The venue was the five-thousand-year-old historical city of Mohenjo Daro. This city, excavated in 1922, is the largest among all the excavations of the Indus Valley Civilization. 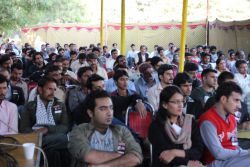 Despite the high costs, the difficulties of travel, and social hardships, 223 comrades from all parts of the country participated in the school, including 21 women. There were five sessions at the school, on World and National Perspectives; “Historical Materialism and the Indus Valley Civilization”; “Whither China?”; “Origins of Marxist Philosophy”; and “Strategy and Tactics of Youth Work.”

On the first day Ijaz Bhagiyo from the host region greeted the participants. One minute’s silence was observed in memory of comrade Sajid Alam, who died in a road accident a few months earlier. Comrade Sajid Alam was the organizer of the 2014 National Summer School held in Malakand.

The first session, on World and National Perspectives, was chaired by Comrade Saddam. Rashid Sheikh, former president of the JKNSF, led off the discussion and explained the events after the fall of the Berlin Wall, the imperialist propaganda on the “end of history,” and the renewed class struggles all over the world. He explained that all the measures, including Quantitative Easing, aimed at achieving a recovery of the global economy have failed. The markets in the West are contracting and the growth rate in China is slowing down. Major cuts are degrading living standards in the United States, and the so-called recovery means even more exploitation of the working class for lower wages. The fall in oil prices would help some economies for a brief period of time and would be disastrous for the others. The crisis will continue on an international scale.

He said that the rulers of Pakistan always manipulate the economic figures. The reported growth rate of 4.1% is less than 2% in fact. A growth rate of at least 7% is required simply to keep poverty and unemployment at the present levels. The economic catastrophe is expressed in the absurd politics of the ruling class, and the masses have become indifferent to it. The working class will inevitably rise against this brutal system. Sangeen from Malakand; Valeed Khan, Atif Ali, and Umar Shahid from Lahore; Rizwan Akhtar from Faisalabad; Imran Kamyana, Fahad, and Rahul from Hyderabad; and Paras Jan from Karachi made interventions. Rashid Shaikh summed up the session and answered the questions. 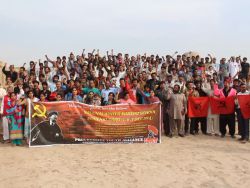 The agenda for the second session was “Historical Materialism and the Indus Valley Civilization.” The session was chaired by Majid Memon, and Saeed Khaskheli led off. He explained that the evolution of the Indus Valley Civilization was different from that in Europe. The remains of the civilization show a developed human society in 7000 BCE, spread across modern Sindh, Punjab, Pashtoonkhwa, Baluchistan, and Gujrat in India.

There is no evidence of slavery. Palaces, temples, weapons, and instruments of torture are not found here. He explained the historical development of the society till the time of British colonialization. Vinod Kumar, Mahbloos, Yasir Irshad, and Rashid Khalid intervened in the discussion. Adam Pal summed up the session and answered the questions. He explained that conditions of life in Mohenjo Daro were, from many points of view, better than the modern day cities around it. The people of Larkana today don’t have clean drinking water or a sewage system in the age of modern technology. 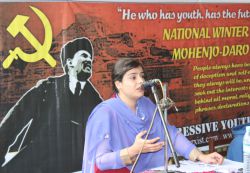 The agenda of the third session was “Whither China?” The session was chaired by Asif Rashid, and Anam Patafi led off the discussion. She explained the historical development of the Chinese economy and the perspectives. China is a major part of the world economy, and a contraction of 4% in its economy could cause a 1.4% contraction in the world economy. Inequality in China is the second highest in the world. Since 2009 the rulers of China have been trying to maintain demand via state stimulus to keep the growth rate from falling. But this cannot go on indefinitely. More than 820 million people in China live on less than a dollar a day. The ruling classes have imperialist designs and are investing in Asia and Africa. However, there have also been 945 strikes in 2014. China has the strongest and biggest working class in the world, and once it comes into action the world will shake. Ejaz Ayub, Avinash, Ramiz Misrani, Tasawaar, Imran Kamyana, and Adam Pal intervened in the discussion. 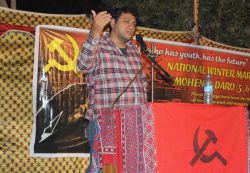 The fourth session, on the “Origins of Marxist Philosophy,” was chaired by Umar Rashid and led off by Adam Pal. He explained the different trends in the history of philosophy leading to Feuerbach and the end of classical German philosophy. Hegel’s dialectics was turned upside down, and Marx put it right by basing it on materialism. He explained the revolutionary implications of Marxist philosophy with Marx’s quote, “The philosophers have only interpreted the world, in various ways. The point, however, is to change it.” 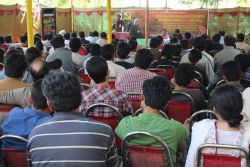 On the third day the agenda of the discussion was the organization of the Progressive Youth Alliance. Shahryar Zoq chaired the session and Imran Kamyana led off the discussion about the role of youth in building the revolutionary party. This was followed by the organizational reports and suggestions. Adam Pal made the closing remarks. The school was concluded by singing the Internationale in the ruins of Mohenjo Daro.