Pakistan: The assassination of Benazir Bhutto 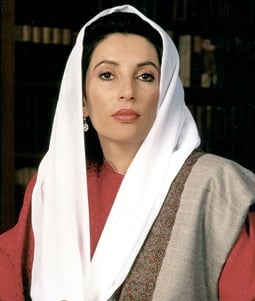 Benazir Bhutto has been killed in a suicide bomb attack.

The leader of the Pakistan People's Party (PPP) had just addressed a rally of PPP supporters in the town of Rawalpindi when the attack took place. First reports talked of at least 100 killed in the attack, but more recent news put the figure at 20.

This murderous onslaught on the PPP came in the middle of an election campaign where, after years of military dictatorship, the masses were striving for a change. There was a wave of support for the PPP, which was sure to win National and provincial assembly elections that were due to be held on 8 January 2008.

The campaign was gathering strength, and the PPP Marxist wing was getting enthusiastic support for its revolutionary socialist message in places as far apart as Karachi and the tribal areas of Waziristan in the far north. These elections would have reflected a big shift to the left in Pakistan. This prospect was causing alarm in the ruling clique. That is what was behind today's atrocity.

This was a crime against the workers and peasants of Pakistan, a bloody provocation intended to cancel the elections that the PPP was sure to win and to provide the excuse for a new clampdown and the possible reintroduction of martial law and dictatorship. It is a counterrevolutionary act that must be condemned without reservation.

Who was responsible? The identity of the murderers is not yet known. But when I asked the comrades in Karachi, the reply was immediate: "it was the mullahs". The dark forces of counterrevolution in countries like Pakistan habitually dress up in the garb of Islamic fundamentalism. There are even rumours in circulation that Benazir was shot from a mosque, although the western media insist that the murder was the result of a suicide bomber.

Whatever the technical details of the assassination, and whoever was the direct agent of this criminal act, the threads of the conspiracy undoubtedly reach high up. The so-called Islamic fundamentalists and jihadis are only the puppets and hired assassins of reactionary forces that ere entrenched in the Pakistani ruling class and the state apparatus, lavishly funded by the Pakistan Intelligence Services (ISI), drug barons with connections with the Taliban, and the Saudi regime, always anxious to support and finance any counterrevolutionary activity in the world.

The war in Afghanistan is having a ruinous effect on Pakistan. The Pakistan ruling class had ambitions of dominating the country after the expulsion of the Russians. The Pakistan army and ISI have been meddling there for decades. They are still mixed up with the Taliban and the drug barons (which is the same thing). Huge fortunes are made from the drugs trade that is poisoning Pakistan and destabilizing its economy, society and politics.

The assassination of Benazir Bhutto is just another expression of the sheer rottenness, degeneration and corruption that is gnawing at the vitals of Pakistan. The misery of the masses, the poverty, the injustices, cry out for a solution. The landlords and capitalists have no solution to this. The workers and peasants looked to the PPP for a way out.

Some so-called "lefts" will say: But Benazir's programme could not have provided the way out. The Marxists in the PPP are fighting for the programme of socialism – for the original programme of the PPP. But the masses can only learn which programme and policies are correct through their own experience.

The January elections would have given the masses an opportunity to advance at least one step in the right direction, by inflicting a decisive defeat on the forces of reaction and dictatorship. Then they would have had the possibility of learning about programmes and policies, not in theory but in practice.

Now it seems most likely that they will be denied this opportunity. The purpose of this criminal provocation is quite clear: to cancel the elections. I have not yet seen the response of the Pakistan authorities, but it would be unthinkable that the elections could now take place on 8 January. They will be at least postponed for some time.

What effect will this have upon the masses? I have just spoken on the phone to the comrades of The Struggle in Karachi, where they have been battling the reactionary thugs of the MQM in a fierce election campaign. They tell me that there is a general feeling of shock among the masses. "People are weeping and women are wailing in their houses: I can hear them now," the comrade said.

But the shock is already turning into anger: "There is rioting in the streets of Karachi and other cities. People are blocking the roads and burning tires."  That is a warning to the ruling class that the patience of the masses is now exhausted. The movement of the masses cannot be halted by the assassination of one leader – or by a thousand.

The masses always adhere to their traditional mass organizations. The PPP developed in the heat of the revolutionary movement of 1968-9, when the workers and peasants came close to taking power.

The dictator Zia murdered Benazir's father. That did not prevent the resurrection of the PPP in the 1980s. The forces of state terrorism murdered Benazir's brother, Murtazar. Then they exiled Benazir and installed a new dictatorship. That did not prevent the PPP from experiencing a new resurrection when 2-3 million people came onto the streets to welcome her back.

The masses will recover from the momentary shock and grief. These emotions will be replaced in time by anger and the desire for revenge. But what is needed is not individual revenge, but collective revenge. What is needed is to prepare the masses for a new revolutionary offensive that will tackle the problems of Pakistan by the roots.

The ruling clique may delay the date of the elections, but sooner or later they will have to be called. The reactionaries calculate that the removal of Benazir will weaken the PPP. That is a serious miscalculation! The PPP cannot be reduced to a single individual. If that were true. It would have disappeared after the judicial murder of Zulfiqar Ali Bhutto.

The PPP is not one individual, It is the organized expression of the will of the masses to change society. It is the three million who came on the streets to greet Benazir's return. It is the tens of millions more who were preparing to vote for a change in the January elections. These millions are now mourning. But they will not mourn forever. They will find effective ways of struggle to make their voice heard.

The masses must protest the murder of the PPP leader through a national protest movement culminating in a protest general strike. They must raise the banner of democracy. Against dictatorship! No more martial law! Call new elections immediately!

The PPP leadership must not capitulate to any pressure to delay the elections. Call the national and provisional elections! Let the people's voice be heard! Above all, the PPP must return its original programme and principles.

In the PPP's founding programme is inscribed the aim of the socialist transformation of society. It includes the nationalization of the land, banks and industries under workers control, the replacement of the standing army by a workers and peasants militia. These ideas are as correct and relevant today as when they were first written!

There is nothing easier than to take the life of a man or a woman. We humans are frail creatures and easily killed. But you cannot murder an idea whose time has come!