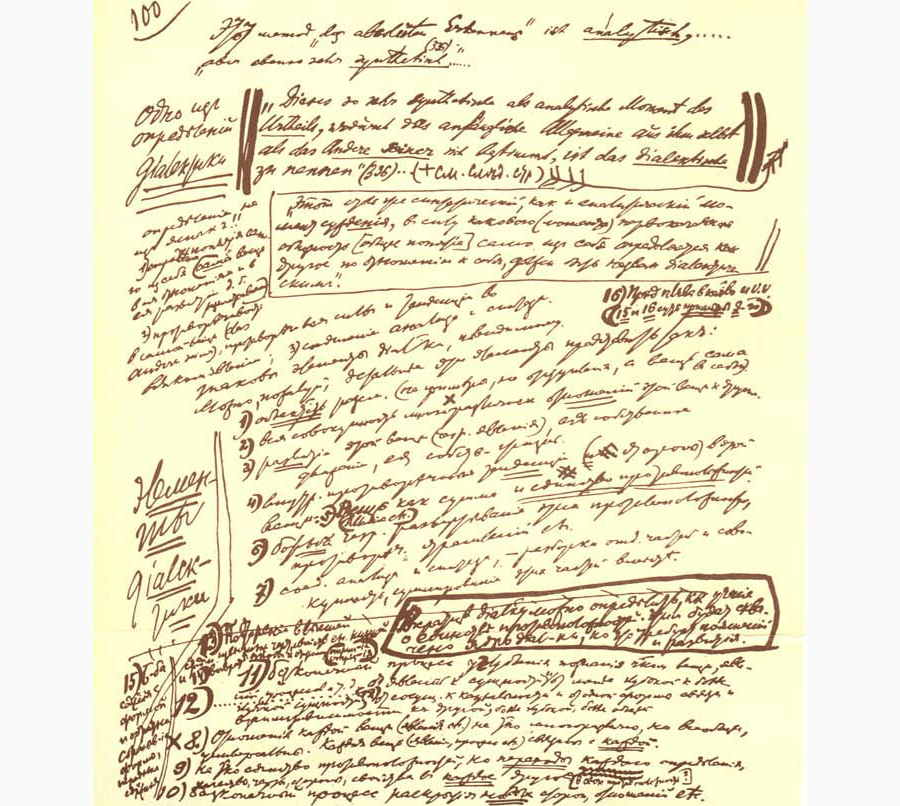 It is highly instructive that in 1914, at a time when World War I raged and the Second International had ignominiously collapsed, Lenin took the time to make a careful study of Hegel and his system of dialectics. To untangle the mess of contradictions facing the revolutionary internationalists and world working class, it was essential to go back to the fundamentals. This is always the case whenever earthshaking events confront Marxists, and it is no exaggeration to state that this study was part of Lenin’s preparation for the October Revolution. We produce here three excerpts from Volume 38 of Lenin’s Collected Works, which are a brilliant summation of the essence of Hegelian dialectics.

Such apparently are the elements of dialectics.

One could perhaps present these elements in greater detail as follows:

In brief, dialectics can be defined as the doctrine of the unity of opposites. This embodies the essence of dialectics, but it requires explanations and development.

The splitting of a single whole and the cognition of its contradictory parts is the essence—one of the “essentials,” one of the principal, if not the principal, characteristics or features—of dialectics. That is precisely how Hegel, too, puts the matter.

The correctness of this aspect of the content of dialectics must be tested by the history of science. This aspect of dialectics—e.g., in Plekhanov—usually receives inadequate attention: the identity of opposites is taken as the sum total of examples—“for example, a seed,” “for example, primitive communism.” The same is true of Engels. But it is “in the interests of popularization . . .” and not as a law of cognition—and as a law of the objective world.

In mathematics: + and −, differential and integral,
In mechanics: action and reaction,
In physics: positive and negative electricity,
In chemistry: the combination and dissociation of atoms,
In social science: the class struggle.

The identity of opposites—it would be more correct, perhaps, to say their “unity”—although the difference between the terms identity and unity is not particularly important here. In a certain sense both are correct—is the recognition—discovery—of the contradictory, mutually exclusive, opposite tendencies in all phenomena and processes of nature—including mind and society. The condition for the knowledge of all processes of the world in their “self-movement,” in their spontaneous development, in their real life, is the knowledge of them as a unity of opposites. Development is the “struggle” of opposites. The two basic—or two possible? Or two historically observable?—conceptions of development (evolution) are: development as decrease and increase, as repetition, and development as a unity of opposites—the division of a unity into mutually exclusive opposites and their reciprocal relation!

In the first conception of motion, self-movement, its driving force, its source, its motive, remains in the shade—or this source is made external—God, subject, etc. In the second conception the chief attention is directed precisely to knowledge of the source of “self-movement.”

The unity—coincidence, identity, equal action—of opposites is conditional, temporary, transitory, relative. The struggle of mutually exclusive opposites is absolute, just as development and motion are absolute.

In his Capital, Marx first analyzes the simplest, most ordinary and fundamental, most common and everyday relation of bourgeois (commodity) society, a relation encountered billions of times, viz., the exchange of commodities. In this very simple phenomenon, in this “cell” of bourgeois society, analysis reveals all the contradictions—or the germs of all contradictions—of modern society. The subsequent exposition shows us the development—both growth and movement—of these contradictions and of this society in the sum of its individual parts. From its beginning to its end.

Such must also be the method of exposition (or study) of dialectics in general—for with Marx the dialectics of bourgeois society is only a particular case of dialectics. To begin with what is the simplest, most ordinary, common, etc., with any proposition: the leaves of a tree are green; John is a man; Fido is a dog, etc. Here already we have dialectics—as Hegel’s genius recognized; the individual is the universal.

The medieval scholastics cracked their brains over the question as to whether universals (abstractions) actually exist. Hegel solved this problem brilliantly by pointing out that the particular and the universal are in fact the same: every particular is, in one way or another, a universal. Every individual belongs to a genus or species that defines its true nature, however, genesis and species are made up of individual creatures. The limit of these categories in biology is determined by the ability to reproduce.

Here already we have the elements, the germs, the concepts of necessity, of objective connection in nature, etc. Here already we have the contingent and the necessary, the phenomenon and the essence. This apparently contradictory assertion can be shown from even the simplest sentence. It is impossible to express the nature of any particular without immediately turning it into a universal. Such is the nature of any definition, for example when we say John is a man, Fido is a dog, this is a leaf of a tree”, etc., we disregard a number of attributes as contingent; we separate the essence from the appearance, and counterpose the one to the other.

Thus, in any proposition we can—and must—disclose as in a “nucleus” (“cell”) the germs of all the elements of dialectics, and thereby show that dialectics is a property of all human knowledge in general.

And natural science shows us—and here again it must be demonstrated in any simple instance—objective nature with the same qualities, the transformation of the individual into the universal, of the contingent into the necessary, transitions, modulations, and the reciprocal connection of opposites. Dialectics is the theory of knowledge of (Hegel and) Marxism. This is the “aspect” of the matter—it is not “an aspect” but the essence of the matter—to which Plekhanov, not to speak of other Marxists, paid no attention.

Knowledge is represented in the form of a series of circles both by Hegel (see Logic) and by the modern “epistemologist” of natural science, the eclectic and foe of Hegelianism—which he did not understand!!—Paul Volkmann.

“Circles” in philosophy: is a chronology of persons essential? No!
Ancient: from Democritus to Plato and the dialectics of Heraclitus.
Renaissance: Descartes versus Gassendi (Spinoza?)
Modern: Holbach-Hegel (via Berkeley, Hume, Kant).
Hegel—Feuerbach—Marx

Dialectics as living, many-sided knowledge—with the number of sides eternally increasing—with an infinite number of shades of every approach and approximation to reality—with a philosophical system growing into a whole out of each shade—here we have an immeasurably rich content as compared with metaphysical materialism, the fundamental misfortune of which is its inability to apply dialectics to the theory of reflection, to the process and development of knowledge.

Human knowledge is not—or does not follow—a straight line, but a curve, which endlessly approximates a series of circles, a spiral. Any fragment, segment, section of this curve can be transformed—transformed one-sidedly—into an independent, complete, straight line, which then—if one does not see the wood for the trees—leads into the quagmire, into clerical obscurantism—where it is anchored by the class interests of the ruling classes. Rectilinearity and one-sidedness, woodenness and petrification, subjectivism and subjective blindness—voila the epistemological roots of idealism. And clerical obscurantism (= philosophical idealism), of course, has epistemological roots, it is not groundless; it is a sterile flower undoubtedly, but a sterile flower that grows on the living tree of living, fertile, genuine, powerful, omnipotent, objective, absolute human knowledge.

The concept (cognition) reveals the essence—the law of causality, identity, difference, etc., in Being (in immediate phenomena). Such is actually the general course of all human cognition—of all science—in general. Such is the course also of natural science and political economy (and history). Insofar [as] Hegel’s dialectic is a generalization of the history of thought.

To trace this more concretely and in greater detail in the history of the separate sciences seems an extraordinarily rewarding task. In logic, the history of thought must, by and large, coincide with the laws of thinking.

It is strikingly evident that Hegel sometimes passes from the abstract to the concrete:

and sometimes the other way around:

The Subjective Notion—the Object—Truth (the Absolute Idea).
{Abstract Being only as a moment in πάντα ρεϊ [everything flows]}

Is this not inconsistency of an idealist—what Marx called the “mysticism of ideas”—in Hegel? Or are there deeper reasons? E.g., Being = Nothing—the idea of Becoming, of development.

First of all, impressions flash by, then Something emerges—afterwards the concepts of quality—the determination of the thing or the phenomenon—and quantity are developed. After that, study and reflection direct thought to cognition of identity—of difference—of Ground—of the Essence versus the Phenomenon—of causality, etc. All these moments—steps, stages, processes—of cognition move in the direction from the subject to the object, being tested in practice and arriving through this test at truth (= the Absolute Idea).

Quality and sensation are one and the same, says Feuerbach. The very first and most familiar to us is sensation, and in it is inevitably also quality . . .

If Marx did not leave behind him a “Logic” (with a capital letter), he did leave the logic of Capital, and this ought to be utilized to the full in this question. In Capital, Marx applied to a single science logic, dialectics, and the theory of knowledge of materialism [three words are not needed: it is one and the same thing] which has taken everything valuable in Hegel and developed it further.

The history of capitalism and the analysis of the concepts summing it up.

The beginning—the most simple, ordinary, mass, immediate “Being”—the single commodity (“Being” in political economy).
The analysis of it as a social relation.
A double analysis, deductive and inductive—logical and historical (forms of value).

Testing by facts or by practice respectively, is to be found here in each step of the analysis.

Cf. Concerning the question of Essence versus Appearance