Police Brutality, Racism, and the Politics of Polarization 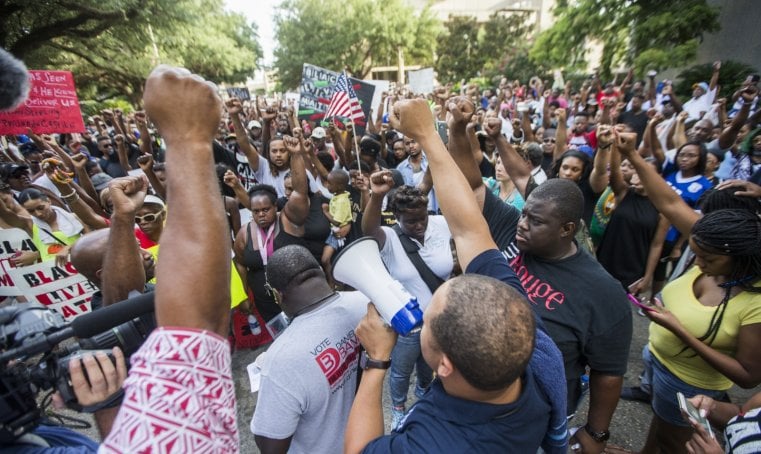 Not only in “far away” Iraq, Afghanistan, and Mexico, but in some of the most prosperous cities in the richest country on earth – all of this gruesomeness is the face of capitalism in crisis, of a system that threatens to take the entire human species down with it.

Nearly a century after the Russian Revolution pointed the way forward, civilization finds itself in a blind alley. To paraphrase Marx’s poetic words from the Communist Manifesto, humanity has conjured previously unfathomable wonders of technology and productivity from the lap of social labor. A world of superabundance for all is right at our fingertips. The disconnect between what is possible and the reality of drudgery and humiliation we are forced to endure is felt in the bones of millions. What stands in the way of a truly humane society is structural, institutional, systemic. What stands in the way is capitalism.

At root, the growing polarization is a function of the widening chasm between the classes. But without a clear outlet and way forward, the building pressure has led to frustration, lashing out, and violence. Police have shot more than 500 people since the beginning of the year. Despite the simmering outrage, not a single police officer has been convicted in the more than two years since Black Lives Matter erupted after the murders of Mike Brown and Eric Garner. The brazen murders of Alton Sterling in Baton Rouge, and Philando Castile in the Twin Cities, were the tragic sparks that gave the BLM protests renewed momentum. Spontaneous demonstrations have again flooded streets across the country, and hundreds have been arrested.

In Dallas, a US Army veteran who had served in Afghanistan, angry at the latest extrajudicial murders by police, killed five uniformed officers and shot several others at the tail end of a peaceful BLM protest. But individual terror, even when in response to the organized terror of the capitalist state, can only strengthen reaction. It cannot change the fundamental relation between the exploiters and the exploited, between the oppressor class and the oppressed. Leon Trotsky explained, “individual revenge does not satisfy us. The account we have to settle with the capitalist system is too great to be presented to some functionary.”

The best the liberal politicians and sycophants can offer are crocodile tears and empty appeals for unity and nonviolence. They lament the “fracturing” of the nation, plead for an end to the division between police and the people they “serve,” and nervously describe the country as a “powderkeg” waiting to blow. Armed to the teeth, profiting billions from arms sales, bombing and droning around the world, and pushing legislation to disarm the working class, they piously remind us that “all lives matter”—to which George Orwell might have added, “but some lives matter more than others!”

The relative class peace of the postwar boom—with emphasis on “relative,” as the “War on Drugs” has been a one-sided civil war waged against the poor—was predicated on an unprecedented economic boom. The prosperity dulled the edge of the dictatorship of capital for a significant layer of the population. But this could not last indefinitely. The system is rotting from the inside out. The number of people who benefit from the system is shrinking. The buffer of the so-called American “middle class” has been ruthlessly eroded away. On the front lines defending the private property of the 1% are small armies of militarized police—hardly a recipe for class peace. The state-imposed reign of terror in poor neighborhoods is necessary because the workers and poor make up the vast majority. As the authority and fear of the police plummets, the capitalists fear the consequences as their “divide and conquer” strategy threatens to spiral out of control—they are too few to defend their wealth and power themselves.

Treated like starved rats in a cage, human beings will interact accordingly. If everyone had jobs, healthcare, education, and safe, affordable housing, relations between humans would be transformed: with nothing to police, there would be no need for police. But with scarcity comes the need to enforce the unequal distribution of resources. The absurd contradiction we must resolve is that capitalist scarcity is artificial. There is more than enough to go around. It is only the profit motive that stands in the way of a rational system of production, distribution, and exchange, in harmony with the environment.

The working class has the power to do away with capitalism once and for all—provided it has a leadership that can harness our class’s vast, untapped energy. In the absence of such a leadership, the deadlock of instability can be prolonged for years and even decades. The blame for this impasse ultimately lies with the current crop of pro-capitalist labor leaders, who sit on a volcano of revolutionary potential but refuse to unleash the latent power of the workers. A new leadership must be built with a sense of urgency.

As we head into what one Republican senator called a “dumpster fire” of an election, the polarization and chaos will only deepen. Bernie Sanders’s betrayal of his supporters’ trust will lead many to look for solutions outside the two-party system—and beyond the confines of reformism. The share of voters who identify as “independent” is at a 75-year high—39%—a plurality of the electorate. Millions cannot decide which major candidate is the “lesser evil.” Under these conditions, an independent socialist party could quickly gain momentum—and political power.

As Marxists we understand that to end police brutality, racism, violence, poverty, exploitation, and oppression, we must end capitalism. We explain that class-independent political and economic struggle is the only way to overcome the resistance of the capitalists and their defenders. We recognize that there are powerful centrifugal forces that seek to tear apart the unity of the working class. Fortunately, these are countervailed by far stronger forces that inexorably push us together to defend our collective interests. But the unity of the class across all subsidiary lines cannot simply be declared, but must be forged in common struggle. This is the task of the coming period.

Building an organization capable of providing the organizational methods and theoretical compass necessary will not be automatic or easy. But according to good old American pragmatism, “every problem has a solution,” and “there’s a tool for every job.” The problem is capitalism and the tool is a mass revolutionary party with roots in every workplace, neighborhood, and campus. We invite you to join the IMT to help us build it!