The result of Sunday’s Turkish general elections and the clear defeat of President Recep Tayyip Erdoğan’s AK Party mark a qualitative change in the situation in the country and bear important consequences for the whole of the Middle East.

AK Party still retained more than 40.9% of the total vote (18.9 million), but the bitter mood of the party’s leaders and supporters at post-election events reveal clearly the scope of their defeat. The ruling party, which had previously gone from strength to strength since it erupted onto the stage in 2002, lost 2.6 million votes and 69 MPs, compared to the 2011 results. 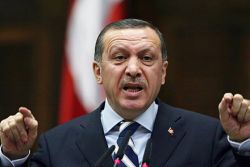 Erdoğan, in spite of being officially constrained by the Constitution in tampering with the election campaign, used all the power at his disposal to back up the AK Party’s campaign. His aim was to sweep the floor and gain a two-thirds parliamentary majority in order to unilaterally change the Constitution in favor of stronger presidential powers, but his attempt backfired and the AK Party lost its parliamentary majority.

The outcome of Sunday’s vote is that the AK Party’s 258 MPs are not enough to secure a majority in the 550-strong Parliament, and even the possibility of a coalition government is extremely unlikely. Both AK Party and the right-wing nationalist MHP have everything to lose from entering into a joint coalition, and CHP and HDP have clearly ruled out any support for Erdoğan. The most likely scenario is one of a weak AK Party minority government and early elections, thus adding to the general instability.

The CHP (the main traditional left opposition party) votes stagnated at 25% (11.5 million votes, just 400,000 more than in 2011). The fact that the CHP did not make any significant gains from the ruling party’s crisis shows that it was unable to stand out as a credible alternative to Erdoğan, in spite of their significant move to a more radical program in the course of the election campaign. The right-wing nationalists of the MHP advanced with 16.3% (7.5 million votes, gaining 1.8 million votes more than in 2011), but not as much as they were expecting.

The biggest change in the situation, however, is the sweeping rise of the left-wing HDP, which won 13.1% of the votes (more than 6 million), well above what it was credited by most polls. By breaking through the extremely undemocratic 10% electoral threshold, the HDP secured at least 80 MPs, thus smashing to pieces the prospect of the AK Party’s chances of retaining a parliamentary majority.

The election campaign was characterized by extreme polarization and was marred by violence, particularly against the HDP, with dozens of attacks on HDP offices or activists reported, including at least three bomb attacks on HDP offices and rallies. A 17-year-old boy died yesterday, the third victim of a twin bomb blast that hit the HDP rally in Diyarbakir two days before the election.

The roots of HDP’s success

While open links to the illegal PKK are banned, the HDP leadership has been part of the negotiating table with the Turkish government for a settlement to the decades-long conflict between the Turkish state and the Kurdish insurgency.

Over the past years, however, there was an important shift on part of the HDP leadership from a nationalist agenda to a more class-based and left-wing appeal to all the oppressed layers of Turkish society. The left-wing turn promoted by the HDP leaders Selahattin Demirtaş and Figen Yüksekdağ was confirmed by their Election Manifesto, which raised social demands addressing burning problems facing millions of workers, such as the demand to double the minimum wage to TRY 1,800 ($650) and setting the minimum retirement pension to the same level. They also promised to establish a pass with subsidies on public transport for all youth between 15 and 25.

The increasingly corrupt and authoritarian profile of Erdoğan’s regime and its political use of religion also further alienated and radicalized the opposition of all minorities and oppressed layers of Turkish society. The HDP’s vow that “the election manifesto that we present is the nightmare of the sultan and the dream of all the peoples of Turkey”—the “Sultan” being Erdoğan, who has been constantly evoking in his rhetoric the Ottoman Empire—clearly resonated and allowed the HDP to partially break through religious and national barriers.

International media have given particular prominence to HDP’s progressive vow to recognize equal rights for gays. However, the democratic demands raised by the HDP manifesto go further than that, addressing the struggle against women’s oppression in Turkish society and the very important recognition of national aspirations and religious freedom, by promising that all native languages would be recognized and allowed in public education, and that the teaching of religion would be removed from the school curriculum. Other important demands were the lowering of the voting legal age to 16 and the abolition of the undemocratic 10% election threshold.

Among the Kurds, longstanding support for the AK Party among the most backward layers was jeopardized by the impact of the fighting for Kobane and Erdoğan’s cynical behavior in relation to ISIS. The harsh repression of protests by Kurdish youth left dozens of casualties on the streets, provoking a wave of revulsion against the government.

By analyzing the election results more closely it is clear that an important layer of the Kurdish population broke with the AK Party and moved to the HDP. Contrary to the analysis of some commentators that this fact reveals a “conservative” background to the HDP vote, it illustrates how sections of the masses whose consciousness may lag behind for a period can swing rapidly to a more advanced position when a visible alternative is provided.

But the growth of the HDP cannot be reduced merely to a swing in the Kurdish vote. Clearly other layers, such as the Alevi, Armenian, and other minorities as well as a section of the youth and the advanced workers, also converged on the HDP.

On the other hand, in order to really pose a threat to Erdoğan and the Turkish ruling class, the HDP would need to consciously build its organized support among the Turkish working class as a whole. The recent victorious strikes of the autoworkers and the militant mood they revealed by developing in sharp opposition with the yellow trade unions are a testament to the fact that a radical alternative to capitalist oppression could gain significant support among the Turkish workers.

However, the significant gains achieved by the HDP would be undermined and destroyed if the past wavering attitude of the HDP leadership towards Erdoğan were to resurface. Their fear of the adverse effect of any criticism or opposition to Erdoğan on the fate of the Kurdish negotiations represented an absolute fetter on their ability to present themselves as a viable force in opposition to the system, and would inevitably disappoint and alienate the support of the most radical layers who are responsible for the present growth of the party.

Fragile state of the economy

Less than two years ago, the President of the World Bank, Jim Yong Kim, declared that Turkey’s economic achievements were an inspiration for many other developing countries. In fact, the AK Party came to power in 2002 following a period of severe economic crisis. Since then the Turkish economy has expanded by 68%, despite two bad years (2008–9) at the height of the global financial crisis, thus performing better than China or Brazil in the same period. But the economic growth largely rested on a weak base, which exposes Turkey’s economy to the changing winds of the world economy.

Last year the Turkish economy slowed down, growing just 2.9%, and forecasts for this year do not look any better. Unemployment has gone up from below 8% a few years ago to more than 10% now.

The fragility of the Turkish economy is shown by their current account chronic deficit (of around 6–8%, depending on the year), which would not represent a problem in normal times, but could become one in the present extremely unstable international and internal political situation.

Turkey’s looming crisis is bound to escalate in the coming period, as the world crisis of capitalism and the escalating crisis in the Middle East unfold. Internal instability and the weakness of a minority government could trigger a flight of foreign capital out of the country and further destabilize the economy. The boom of the past is over, and Turkey is one of the worst countries in the world in terms of inequality, with 50% of the population living below the poverty line, according to the estimate of the yellow trade union confederation Turk-is.

The material conditions that are developing in the country are a finished recipe for the explosion of the class struggle, as shown by the defiant mood of both the youth movement of Gezi Park in 2013 and the workers’ strikes of the past weeks. These election results are an important but pale reflection of the real processes at work beneath the surface among the Turkish workers and youth.