Power to the People! Cynthia McKinney for President 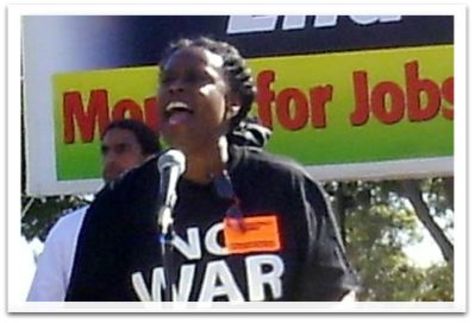 Click here for a downloadable leaflet of this statement.

American workers are facing a serious crisis. Over the last few years, gas and food prices have skyrocketed, millions of quality jobs have been lost, indebtedness and home foreclosures have reached record levels, hundreds of thousands have been displaced and gentrified in the aftermath of Katrina, and the wars in Iraq and Afghanistan drag on and on with no end in sight. Billions are spent each month on these wars, money that could instead be used to pay for much-needed social services, education, housing, health care and jobs.

After nearly eight years under GW Bush, it’s no surprise that Barack Obama’s promises of “hope” and “change” have inspired millions. But what do he and the Democrats really offer? Will they immediately and unconditionally cut the funding and withdraw all the troops from Iraq and Afghanistan?  Do they stand for free, universal health care and education? Will they launch a mass program of public works to create millions of union jobs at a living wage and rebuild our crumbling infrastructure? Will they repeal anti-worker laws such as Taft-Hartley and grant amnesty to immigrant workers and their families? If we look at their record, the answer is clear. They voted for the wars in Iraq and Afghanistan and have approved every single war budget Bush has sent them, while cut after cut was made here at home.

Like the Republicans, they represent the interests of corporate America and only pay lip service to the pressing needs of the majority. Faced with a growing economic and social crisis and rising discontent, we can predict that they will “shift to the left.” But changing this or that secondary policy does not change the fundamental nature of the Democrats as a tool of the ruling class. They will seek to play the “good cop” of the capitalist political order, in order to cut across the formation of a labor party and to preserve their system. Our task is not to push them to the left. We need a clear and complete break.

The capitalist system itself is the root of the problems facing working people. So how can we trust capitalist political parties to solve them for us? The Workers International League is in favor of building a mass party of labor, based on the unions, that fights for a socialist program. We need a party that represents the interests of working people, instead of the interests of big business. Such a party could unite everyone from trade unionists to the anti-war movement, from immigrant workers to the victims of Katrina, as well as the millions of Americans young and old who are unable to afford health care, an education or find a decent job. But as of yet, no such party exists. So what can we do?

This election year, there are several candidates that represent a break with the two party duopoly. We believe Cynthia McKinney’s “Power to the People” campaign is the best choice for working people. As a former Democratic congresswoman from Georgia, she knows all too well that it is impossible to reform the Democrats.

We believe working people and youth should vote for McKinney as a way to say “No!” to the wars in the Middle East, “No!” to U.S intervention in Latin America, “No!” to the bloated military budget, and “No!” to the big business war on our standard of living. Voting for McKinney is a way to say we don’t support the two big business political parties, that we need a party that represents us.  It is a way to say that we want the unions to organize the unorganized, fight against concessions to big business, and for a better standard of living. It is a way to demand free education and health care for all.  We see this campaign as the beginning of what will be a long but ultimately successful fight for a better life for working people.