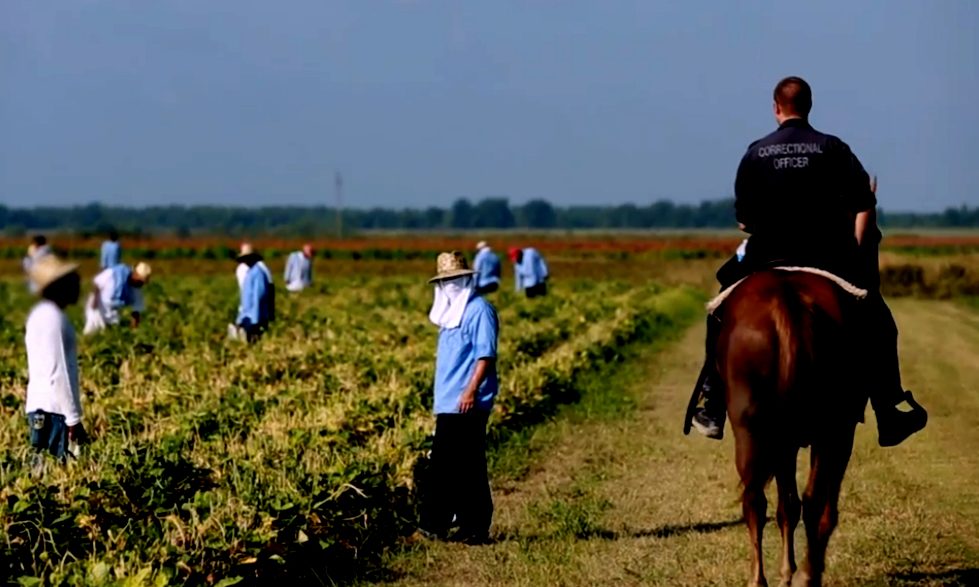 The Economist recently reported that the US market of 61,000 captive workers is worth over $1 billion. “At the federal level, the Bureau of Prisons operates a program known as Federal Prison Industries that pays inmates roughly $0.90 an hour to produce everything from mattresses, spectacles, road signs and body armor for other government agencies, earning $500m in sales in fiscal 2016.”

At the state level, “California’s program expects to generate $232m in sales this year, much of it from construction and textiles, though $10m is also expected from meat-cutting. In Idaho, prisoners roast potatoes. In Kentucky, they sell $1m worth of cattle.”

The unique level of exploitation endured by incarcerated workers must necessarily give rise to organized resistance and solidarity. To give just one example, in July 2017, prisoners in a workhouse near St. Louis were heard screaming from the windows of the building, crying out for air conditioners to relieve the oppressive heat in their workplace.

Hundreds of outsiders, including members of DSA and the IMT, participate in demonstrations in support. Prison authorities eventually installed air conditioners in response to the pressure. In this instance, we can see a glimmer of the potential for mass organized resistance against the exploitation of prisoners.

In response to the blatant exploitation in US prisons, organizations including the Free Alabama Movement (FAM), which was formed by a handful of prisoners in that state, and the IWW’s Incarcerated Workers’ Organizing Committee, called for a nationwide strike on September 8, the anniversary of the Attica uprising of 1971. September 9 saw the eruption of the largest prison strike in US history, involving roughly 20,000 workers in 50 prisons in 24 states.

More than a year earlier, in January 2015, FAM released a document titled “Let the Crops Rot in the Fields.” In it, they argued that anti-prison resistance should strategically target those points where the system is most integrated with the economy: “Organize prison shutdowns at prisons with major economic industries (tag plants, fleet services, food distribution centers, agriculture, etc.).” In a document titled, “Our Freedom Bill,” they made their aims clear to the State of Alabama, starting with the demand that the prison population be reduced to the intended capacity of the facilities—prisons in Alabama are currently at over 200% capacity.

The IWW’s Incarcerated Workers Organizing Committee (IWOC) has produced a pamphlet documenting first-hand accounts of the prison struggle over the last year. Due to the isolating nature of prisons, it’s difficult to get accurate information to the outside world, and these first-hand accounts are a valuable resource for learning about the struggle of these incarcerated workers. One prisoner in Florida wrote about the literal starvation diet imposed on prisoners: “Because of the poor food amounts you should consume 2,000 calories a day but we only consume around 1,200 to 1,500 a day.”

The conditions in prison make coordination and planning extremely difficult and there is a conscious effort by prison authorities to prevent prisoners from organizing. Prisoners identified as leaders are often removed from the rest of the inmate population even before strikes and demonstrations break out.

Justin Curtis, imprisoned in Florida, wrote: “I’ve talked to other people who have done time in other states and heard of the unity on the part of inmates, but here in Florida that is not the case. Down here the majority of inmates are out for self, don’t care if their fellow inmates have or have not, and the violence, manipulation, and general disregard that occurs from inmate [to] inmate is sad and frustrating. The guards and administration are taught psychological warfare/divide-and-conquer tactics that they implement in plain view for us inmates to see, but due to the majority outlook and selfishness, there is never any type of united effort on any front. Several of us talk about standing up, but that’s it . . . until September 9, 2016.”

Prisoners are extremely isolated, and their communications with people on the outside are subject to the strictest scrutiny and censorship by officials. Those not in prison face extraordinary barriers to understanding and supporting the struggle on the inside. The efforts of prisoner activists must, therefore, be met by support and solidarity from the outside.

Khalfani Malik Khaldun, writing from prison in Indiana, said, “Comrade, preparation is key when engaging in a massive show of resistance. The support from outside should initially come by way of letters to active participants expressing solidarity and love or pictures, money, etc. for years while I have been on the frontlines of activism inside the Indiana Prison Plantations. The support letters and financial assistance aided in my survival, my motivation, and the energy fueled my determination.”

Today’s prison strikes have historical precedents in the struggle of slaves before and during the Civil War. The revolutionary overthrow of the Southern slave power was one of the highest expressions of the class struggle in the world and included the largest revolutionary transfer of wealth in US history—the liberation of 4 million slaves worth $3 billion. It is important to recall that slaves played a key role in winning their own freedom. Their revolts, work stoppages, sabotage, coordinated escapes, and mass voluntary enlistment in the Union Army played a significant role in deciding the balance of forces during the Civil War. W.E.B. DuBois characterized these actions as a general strike. As he explained in Black Reconstruction: “This was not merely the desire to stop work. It was a strike on a wide basis against the conditions of work. It was a general strike that involved directly in the end perhaps a half million people. They wanted to stop the economy of the plantation system, and to do that they left the plantations.”

This mass withholding of labor was able to play a crucial role due to the confluence of events at that time. Slave revolts and escapes radicalized the political nature of the Union war effort, and the victories of the Union armies, in turn, helped refine the material basis for even larger labor boycotts and escapes. DuBois wrote that “This was the beginning of the swarming of the slaves, of the quiet but unswerving determination of increasing numbers no longer to work on Confederate plantations and to seek the freedom of the Northern armies. Wherever the army marched and in spite of all obstacles came the rising tide of slaves seeking freedom.”

The effects of strikes, including slave or prison strikes, are intertwined with broader manifestations of the class struggle and are qualitatively affected by events, often in unexpected ways. As Rosa Luxemburg wrote in 1906, “Only in the sultry air of the period of revolution can any partial little conflict between labor and capital grow into a general explosion.” In the case of the US Civil War, the second American revolution, the conflict grew into a general conflagration that overthrew the slave economy and laid the foundations for a radical reconstitution of the state and social life during Reconstruction.

The success of the counterrevolution in reversing the revolutionary gains of Reconstruction—including the reign of terror of white supremacist organizations such as the KKK—reflects the incomplete nature of the revolution. These reactionaries—in many cases the very same people who had previously owned slaves—were again able to dominate the majority of the black population and effectively strip them of the formal rights they had won. The Jim Crow period saw the reinstitution of many of the same methods of rule by the former Southern plantation owners, now modified to comply with the limited bourgeois reforms offered by the 13th, 14th, and 15th Amendments.

A legacy of slavery and struggle

The roots of the prison industry can thus be traced to the Antebellum period, and to this very day, it maintains many of the characteristics of the US slave system. The limited nature of the democratic rights extended to black Americans is explicitly stated in the text of the 13th Amendment: “Neither slavery nor involuntary servitude, except as a punishment for crime whereof the party shall have been duly convicted, shall exist within the United States, or any place subject to their jurisdiction.”

In other words, slavery was not outlawed altogether but only changed in form. While former slaves were formally extended the same legal rights as other US citizens, many key social and economic chains survived abolition. This history has been analyzed in detail in “Mass Incarceration, Mass Struggle.”

The system of racial oppression in the US, which can be traced to the early colonial era, was developed in concert with the system of confining and exploiting unfree workers. The struggle against racism in the US must, therefore, include a militant struggle against the conditions suffered by US prisoners and the legal and law enforcement apparatus constructed to maintain them. In this sense, the prison struggles of today are a direct continuation of the colossal revolutionary legacy of figures such as Harriet Tubman and John Brown.

To fight the prison-industrial complex, fight for socialism!

The US prison system is one of the most rotten, diseased manifestations of capitalism within the borders of the United States and there can be no illusions that the capitalists or their political parties can play a progressive role in abolishing the prison system. Trump’s pardon of Joe Arpaio is merely the crassest expression of the complicity of the entire ruling class.

Prisoners who labor for pennies per hour are among the most exploited people in the country and face barbaric working and living conditions. More than 35% of US prisoners are black, despite making up just 13% of the total population. More than one in three black men in the US will enter the penal system at some point in their lives.

In a society in which well-paid jobs, union protections, education, healthcare, and housing are not guaranteed as basic rights, millions are funneled into the horror houses of the prison system. Despite their physical constraints, it is inspiring and instructive to witness the political conclusions drawn by prisoners in these most extreme of conditions. The growing radicalization of prisoners reflects the radicalization of society as a whole, and they are destined to play an important role in the working class’s struggle against capitalism.

As consciousness increases around this issue, opposition to prison labor is on the rise. As could be expected, there have been calls for boycotts of companies that are known to use prison labor. However, there are strict limits to the ability of consumer boycotts to change society. Only mass action and ultimately, the threat of revolution can bring about serious reforms.

Organized labor has a key role to play in organizing and mobilizing mass working-class struggle around this issue. Unfortunately, despite the radicalizing instincts of the union rank and file, the current labor leadership is in bed with the bosses. But we can be confident that as the class struggle accelerates, both in and out of the unions, both in and out of the prisons, we will see an increase in mass mobilization and solidarity on the question of prison labor—and the labor leaders will either be pushed to the left or be pushed out.

The socialist revolution will win all the rights that the exploited and oppressed have been denied in practice for centuries. By expropriating the rich and directing the vast resources of society to serve the interests of everyone, socialism will lay the basis for ending racism and the very need for penal institutions. Join the IMT to develop and defend the revolutionary perspectives that will raise the struggles of the working class to revolutionary proportions, to prepare the “sultry air of revolution” that will see the liberation and rehabilitation not only of prisoners but of the entire working class!