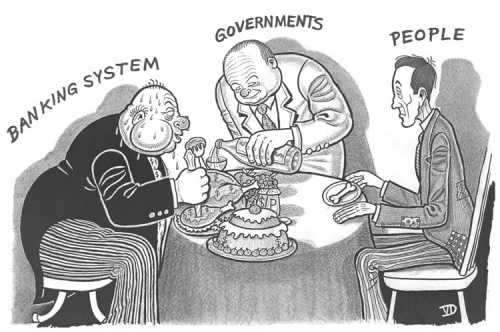 Many Americans seem to have a fascinating obsession with a romantic, idealized version of capitalism—one that has never actually existed. There is a tendency to believe that somehow we’ve just gotten off track—we’ve somehow lost sight of the morals, ethics, and principles that the great Founding Fathers embodied when they formed our government. “Capitalism isn’t the problem—it’s crony capitalism that’s the problem!” We’ve heard this argument many times: if we could just get rid of “cronyism” or “corporatism”, and “replace it with” or “bring back” real capitalism, our problems would be solved. Pull up the comments section in any current online article that so much as questions the current global socioeconomic system, and you are likely to see similar statements and positions.

So just what is so-called crony capitalism? According to the website againstcronycapitalism.org, “Crony capitalism and genuine capitalism, if not opposites, are fundamentally opposed . . . Crony capitalism is the marriage of the state and private special interests. Some people have called it corporatism.” To counterpose “corporatism” with “capitalism” reveals a complete lack of understanding of the progression and development of this system. This is an attempt to divorce capitalism from its historic context and represent it as an idealized abstraction of itself. Crony capitalism is, quite simply, capitalism as it has developed in its highest, imperialist phase.

Do we have “true capitalism”?

There are many people—both on the right and on the left—who envision an economic system free of government interference, free of coercion, in which all parties are able to make any voluntary transaction they choose. According to one of the original leaders of Austrian economics, Murray Rothbard, this is a free market in which “each exchange is undertaken as a voluntary agreement between two people or between groups of people represented by agents.” However, this actually obscures the inner workings of capitalism. At the end of the day, this system they envision amounts to nothing more than a fantasy, an abstraction of reality that “sounds good on paper,” but which ignores the material conditions and the powerful forces that are unleashed by capitalism, and which undermine its own basis.

None other than Albert Einstein had some pretty insightful thoughts relevant to the topic of “pure capitalism,” in his 1949 essay “Why Socialism?”: “The situation prevailing in an economy based on the private ownership of capital is thus characterized by two main principles: first, means of production (capital) are privately owned and the owners dispose of them as they see fit; second, the labor contract is free. Of course, there is no such thing as a pure capitalist society in this sense. In particular, it should be noted that the workers, through long and bitter political struggles, have succeeded in securing a somewhat improved form of the ‘free labor contract’ for certain categories of workers. But taken as a whole, the present-day economy does not differ much from ‘pure’ capitalism.”

What many people don’t realize is that capitalism contains within itself a natural tendency towards what these people consider “crony capitalism.” The natural development and progression of capitalism always results in collusion between the capitalist state and capitalist enterprises generally. The ruling class in a bourgeois democracy consists of a dynamic entanglement of politicians and business owners or executives. One of the contradictions of capitalism is that, at the end of the day, the capitalists themselves never play by the “rules” that capitalism supposedly operates best under.

It is utopian to imagine one can divorce capitalism entirely from capitalist government—commerce cannot function without roads, bridges, electrical lines, etc.—in other words, an extremely complex infrastructure that can only properly be coordinated and planned from a high level. These projects cost a lot of money, so the taxpayers are tapped to foot the bill. Capitalists are naturally keen to influence those in political office, and lean on them when infrastructural changes are needed that would benefit a particular capitalist or industry.

Capitalism’s many inherent contradictions constantly produce antagonisms that result in what libertarians perceive as negative external forces—things like welfare systems. Welfare is only necessitated by capitalism’s tendency to constantly cut wages and jobs, extracting more and more surplus value from the workers, and its constant destabilizing effects on people’s lives. Historically, the state has stepped in and provided a certain “safety net,” a way to provide some sort of stability for the millions who may, out of desperation, otherwise be forced to crime or more dangerous still—civil unrest. Without this, society would likely explode more often and more intensely.

One of Marx’s greatest discoveries was the crisis of overproduction. Essentially, as capitalism develops, the capitalists are constantly reinvesting a portion of their profits into the improvement of their machinery and technology. This results in improved production, and more goods arriving on the market. But the workers are never able to buy back all the goods they produce, because they are not paid wages that are equal to the value of those goods.

This leads inevitably to boom and bust cycles which result in continual instability. In the past, Keynesian policies have been used in an attempt to “smooth out” the wrinkles—although they can never resolve the fundamental contradictions of the system. This represents another major internal contradiction of the system,which in this case places enormous pressure on the state to intervene. But in this epoch of austerity, even these meager crumbs are not being offered to the working class and the poor.

It is also often said that one of the problems with the system is that we’ve simply “gotten too greedy.” Yet rarely is the connection made that we have an economic system that not only encourages and incentivizes greed, but is a system that inherently places extraordinary pressures on all members of society, who often feel they have no other choice but to resort to greed in this “dog-eat-dog” world.

Even people with the best morals and intentions can succumb to the powerful forces of capitalism. Not only are managers and workers under constant pressure to outperform in order to undercut the competition externally, but they also have to be ever wary of competing internally with their coworkers to ensure their performance doesn’t lag too far behind—lest they find themselves out of a job.

Vladimir Lenin took up many of these points nearly one hundred years ago in his ever-relevant masterpiece, Imperialism: The Highest Stage of Capitalism. In this book he took up the domination of finance over industrial capital, the export of capital and the use of military force to secure markets, the fusion between the bourgeois state and big business, and of course, the tendency toward monopolies.

Free market and libertarian types tend to overlook these troublesome contradictions. Lenin went into great detail, highlighting the growth in numbers of large companies, using statistics in Germany and the US, among other countries, from the late 1800s through the early 1900s to demonstrate capitalism’s tendency toward monopolies:

“The enormous growth of industry and the remarkably rapid concentration of production in ever-larger enterprises are one of the most characteristic features of capitalism . . . it can be seen that at a certain stage of its development concentration itself, as it were, leads straight to monopoly, for a score or so of giant enterprises can easily arrive at an agreement, and on the other hand, the hindrance to competition, the tendency towards monopoly, arises from the huge size of the enterprises. This transformation of competition into monopoly is one of the most important—if not the most important—phenomena of modern capitalist economy.”

So we see here that one of capitalism’s greatest alleged strengths—competition—is actually undermined by its own development and tendency toward forming monopolies.

It is utopian to put forth the concept of “pure capitalism.” Crony capitalism, corporatism, and all the other so-called aberrations of our current economic system are simply ways of describing capitalism itself, ways to ignore the true root problem. No amount of reforming this system will ever allow us to pull everyone out of poverty, to provide jobs and health care for all, and stability in our lives. As we are currently seeing with the ruthless attacks on labor by both major parties, austerity, and the nationwide effort to pass so-called “right to work” laws, the bourgeoisie will always defend their wealth and attack the workers, leaving them carrying the burden.

At a time when workers are faced with stagnant or declining wages, joblessness, and a bleak outlook on the future, many Americans are beginning to question the validity and credibility of the dominant free market ideologies that have been relentlessly pounded into their heads. Right now, the ideas of Marxism are beginning to become as popular and relevant as ever. Many mainstream media organizations and economists are finally asking the question to which we’ve always known the answer—“Was Marx right?”

We are at a decisive historical precipice, where humanity is facing enormous crises in nearly every aspect imaginable, and this is reflected in the renewed interest in socialist and Marxist ideas. The collective consciousness has been steadily transforming in the recent period—rejecting the old, long-held ideas and looking to new, fresh ones—even if they are 160 years old!

The only way to end monopolies, collusion, corruption, and of course, “cronyism,” is to end capitalism. It must be replaced by a rationally planned system, one that is truly democratic and controlled by the workers: socialism.