“Let us not, however, flatter ourselves overmuch on account of our human conquest over nature. For each such conquest takes its revenge on us. Each of them, it is true, has in the first place the consequences on which we counted, but in the second and third places it has quite different, unforeseen effects which only too often cancel out the first.” —Friedrich Engels

Located in an urban center not far from a major international airport, West Lake Landfill has become a cancerous tumor on the city of St. Louis thanks to 70 years of capitalist greed. When atomic bombs were dropped on Japan in 1945, killing over 100,000 people, it was claimed that this would “save American lives.” But the legacy of those bombs is killing “American lives” to this day.

When the atom was split and the scientists at Los Alamos created the first nuclear weapons, instruments of imperialist war were not the only result of their work. The uranium and plutonium enrichment process generated massive amounts of radioactive waste with a half-life of tens of thousands of years and incredible potential to harm human life. The disposal of this toxic waste was entrusted mostly to private companies, who cut every corner possible when it came to maximizing their profits. In the case of West Lake, two multi-billion dollar corporations—Republic Services and Mallinckrodt Pharmaceuticals—are directly responsible for what followed. 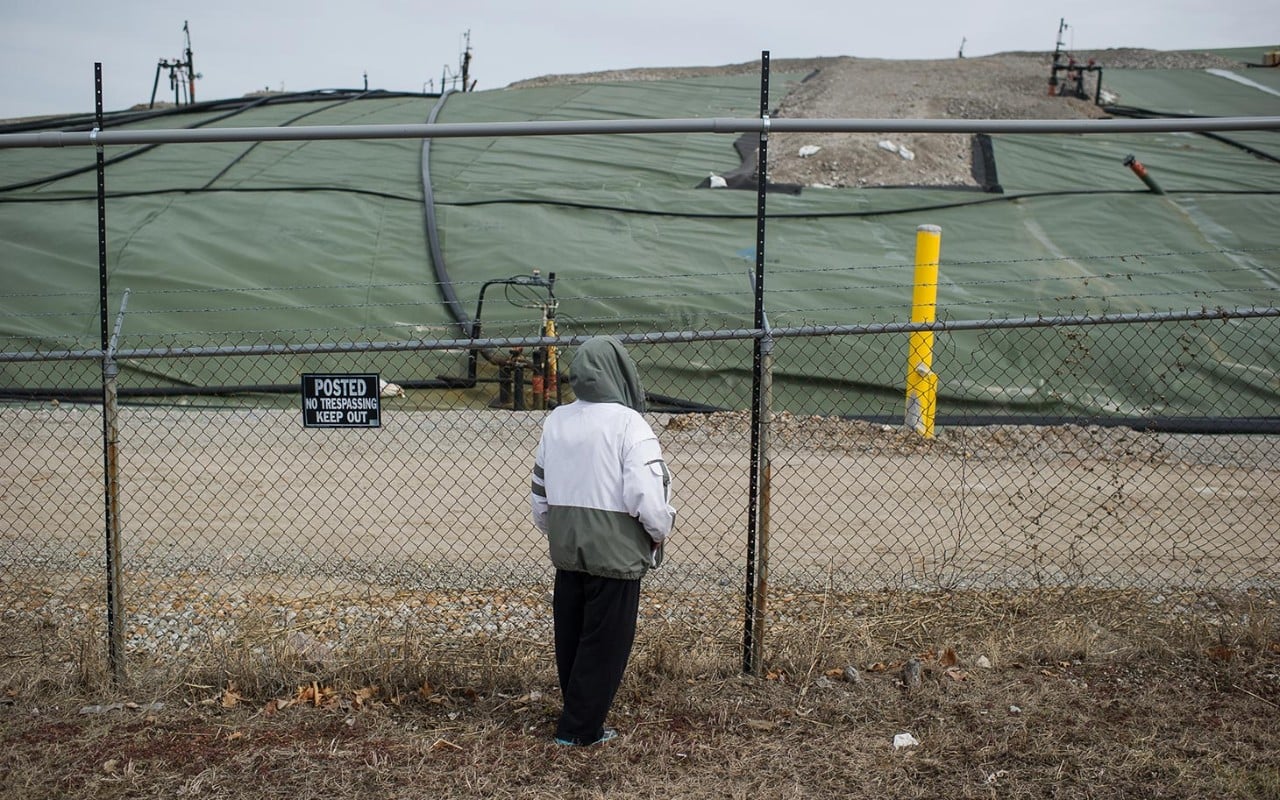 Large amounts of nuclear waste were dumped in West Lake Landfill with the secret approval of the Department of Energy.

Mallinckrodt was among several companies contracted to enrich uranium for the Manhattan Project and subsequent nuclear arms projects. To minimize costs, they dumped large amounts of the resulting waste in various St. Louis suburbs. The biggest load was transported in the dead of night to West Lake Landfill in Bridgeton, dumped with no concern for the health of its waste management workers or the surrounding neighborhood—all with the secret approval of the federal Department of Energy. Republic Services acquired the landfill in 2008 through a corporate merger. It has since set up a front organization to spread false information and advocate for a disposal solution that will save them money at the expense of human lives.

The deception unraveled in 1977 when the Environmental Protection Agency learned about the illegal dump. But they decided that, instead of warning the citizens or drawing up a plan for cleanup, they would simply ignore the issue. This was the status quo until 1989, when the agency designated West Lake Landfill as a Superfund Site. Superfund is the name for the program authorized under the Comprehensive Environmental Response, Compensation, and Liability Act, authorizing the EPA to clean up hazardous sites either with taxpayer funds or by forcing negligent companies to pay. They then put the West Lake site on the National Priorities list, where it lingered before eventually being designated as being a top priority—nearly 40 years after the agency first learned about the problem.

What is buried can often find its way back to the surface, and in the case of West Lake, this is doubly true. The St. Louis area is at a nexus of potential natural disasters—in tornado country and situated on one of the world’s largest fault lines, the New Madrid Seismic Zone. Major flooding also occurs on a regular basis. If natural disasters weren’t enough, the site is near an underground garbage fire that is steadily creeping towards the waste. As the slow, tragic demise of Centralia, Pennsylvania shows, underground fires are hard to put out, and the proximity to the nuclear waste at West Lake gives added urgency to the cleanup operation. 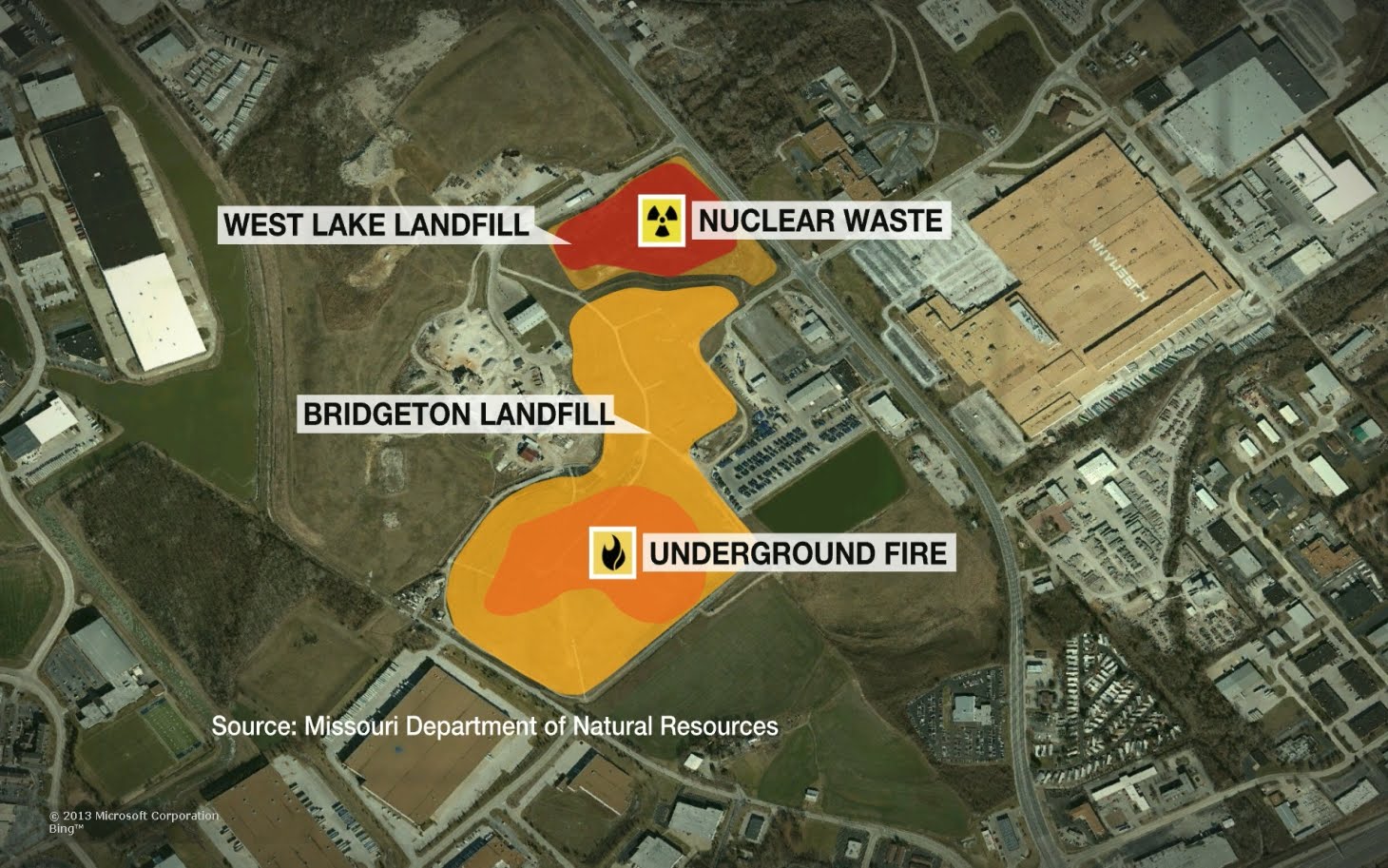 And if those scenarios weren’t menacing enough, the landfill sits over a major aquifer and next to Coldwater Creek, a tributary to the Missouri River, the longest tributary to the Mississippi. The creek has already been found to be radioactive, and in the event of a major disaster, it could poison a river system providing drinking water to millions of people in 62 major US cities.

By law, the EPA is required to open a period for public comment before determining what plans to implement at Superfund sites. West Lake Landfill’s began with an open meeting on March 6, 2018 at a union hall in Bridgeton, which seats 1,000 people. On that night, not only was every seat taken, but people were lined up half-a-dozen deep to the wall and even back into the front foyer. The anger in the room was palpable. As people were taking their seats more than an hour before the start of the meeting, a child of about seven or eight with no hair was passing out leaflets from a local advocacy group.

The meeting began with a breakdown of the situation by an EPA scientist who droned on about irrelevant alternatives when it was clear that only one of the eight options presented was even close to acceptable. Alternative Seven provides for 100% excavation and removal of nuclear waste on the site, along with an engineered cover over the landfill, a proposal that met with unanimous support in the room. For their part, the EPA preferred Alternative Four, which would remove only 67% of the radioactive contaminants, plus an engineered cover. But several studies cast doubt on the waste totals estimated by the EPA. Furthermore, this cover would last at most a few hundred years, whereas it will take thousands of years for the radioactivity to decay totally, and of course, would not stop the poison from leaking further into the ground and contaminating the entire region’s water supply.

Over a thousand filled the EPA open meeting on March 6, and the anger in the room was palpable.

Next on the docket was Albert Kelly, the Trump administration’s now-former Superfund advisor for the region—best known for being so corrupt that even the bourgeois state banned him from the banking industry for life. In his comments, he stated that the EPA’s preferred alternative was “Not just a Band-Aid solution.” He was partially right, as a Band-Aid at least covers a wound, whereas the EPA’s alternative would allow the bleeding of the workers and people of Bridgeton to continue.

When the public was finally allowed to queue up for comment, the strategy of the moderator was clear: run out the clock as much as possible. Constant interruptions and explanations ensued, all the while assuring the furious crowd that this was being done so that more people could speak. This bureaucratic tactic, of course, accomplished nothing of the sort and served only to limit the time available for comment.

Even so, many gut-wrenching personal stories were told by the area’s residents. A member of a local Teamsters union who worked at the landfill tearfully told his story, recounting the numerous tumors he has had on his back, his wife dying of stage-four ovarian cancer, and his mother and all of his close friends having already been killed by this capitalist negligence. He had never been informed by his bosses of the dangers of the site. 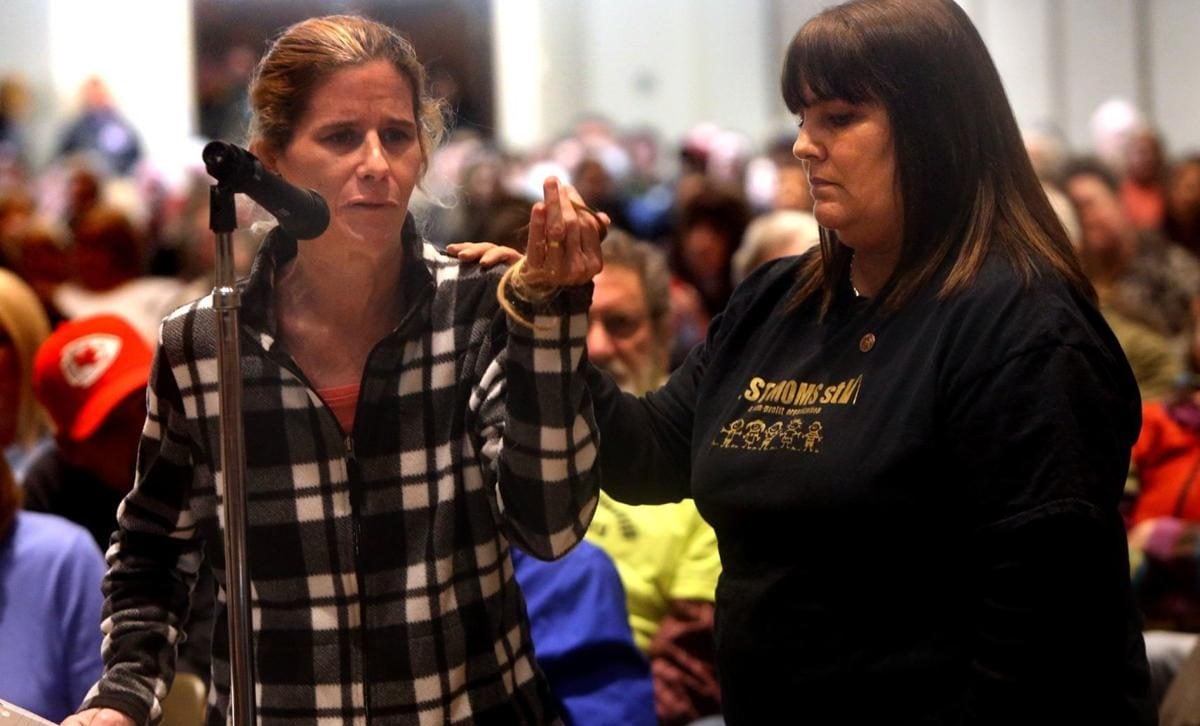 St. Louis mother holds a lock of hair from her daughter, who died of a brain tumor.

Then a mother stepped up with a lock of hair—the only remaining memento of her young daughter, who she lost to a brain tumor. She tearfully told the room that she, too, had cancer, and how her surviving children were extremely frightened, because, despite their youth, they already knew that cancer meant death. She begged the oblivious bureaucrats of the EPA to remove all the waste so future generations won’t have to live through the hell she is living through.

A Belarussian emigrant explained that she and her family had come to St. Louis because of the devastation caused by the 1986 Chernobyl disaster, and how shocking it was to know that she is again in the path of another potential nuclear catastrophe.

All of these stories graphically show how capitalism lies to, batters, exploits, and slaughters human beings for the purpose of defending private property.

When explaining the options, the EPA first and foremost highlighted the cost of the operation; because under capitalism, it all comes down to dollars and cents. By drawing an abstract line at what the EPA is willing to remove and what is okay to stay, the bourgeois state plays a balancing game with human lives, calculating whose life is worth how many millions and who is responsible for footing the bill.

By choosing to only remove 67% of the contaminants, the EPA plays a balancing game with human lives.

The crisis at West Lake Landfill exposes the deep ties between private interests and the capitalist state and highlights the way in which the profit motive is incompatible with rational, scientific solutions to human problems, evident even in those areas ostensibly designed to limit its excesses.

Republic and Mallinckrodt have made good friends within the EPA and Department of Energy, not only during the Trump era but going back decades. When even the so-called EPA sells off the environment and working people to protect capitalist interests, it is evident that the liberal tactic of entrusting the management of society to the bourgeois state can never solve capitalism’s inherent contradictions.

Though the EPA will almost certainly choose Alternative Four, the recent public hearing marked a new stage in the development of revolutionary consciousness for the people of Bridgeton and St. Louis. As one woman said at the meeting, “I consider you [the EPA] an accomplice in my attempted murder!”—and it was clear that the rest of the room felt the same way. Capitalism is killing us all. The adage “socialism or barbarism” remains truer than ever, and if the working class doesn’t take control over the management of energy and the environment into our own hands, it may soon be a case of “socialism or extinction.”

“Thus at every step we are reminded that we by no means rule over nature like a conqueror over a foreign people, like someone standing outside nature— but that we, with flesh, blood, and brain, belong to nature, and exist in its midst. All our mastery of it consists in the fact that we have the advantage of all other creatures of being able to learn its laws and apply them correctly.” —Friedrich Engels