Red for Ed: An Arizona Teacher’s Experience in the Charter System

Following last year’s inspiring wave of victorious teachers’ strikes, West Virginia teachers again took to the picket lines—this time in a political struggle to stop the state’s efforts to privatize education through the spread of charter schools. My own experience as a charter school teacher in Arizona—the “wild west” of education—helped lead me to the ideas of revolutionary socialism, and I’m not the only one.

I started teaching at a large charter organization in August of 2017, as one of the new college graduates who are hired en masse every year. Most of these are undergraduates who have never spent a day in the classroom before their hiring interview. I struggled through the next three years to adapt to my new work tasks, and in our overburdened educational system, there were few willing to coach me in the little time they had. Without a doubt, 2018 was the most difficult year I ever lived through.

When I first learned about the IMT, I was in the middle of relearning my teaching curriculum for the third time. Not a year went by without additional duties being piled on. My grade level assignments increased every year, as did my special needs accommodations. Because it was more difficult for the school’s administrators otherwise, transfer students sat in my upper-level language courses and completed a parallel curriculum for their mastery level. When administration approached me during the previous summer, there was no discussion of extra compensation for this year-long commitment to additional surplus labor being extracted from me. Instead, the conversation immediately turned to the logistics of implementing the program. I had no choice in the matter since class sections had already been made without my input on the plausibility of the program.

In addition to these day-to-day problems, all teachers in the charter organization must either organize a student club for the year or an athletic team for a season. There is no guaranteed compensation for student clubs, which are awarded paltry stipends according to registration numbers, and coaches are hardly given wages commensurate with the hours they spend at practices, games, and meets. Not unlike my yearly contract salary, the number of hours I spent laboring on behalf of my administrators and their bosses from “corporate”—as the teachers refer to the head office, reflecting an awareness of the class relations in the schools—amounted to less than Arizona’s current minimum wage. That is based on a conservative estimate that my average workweek between teaching, lesson planning, grading, and extracurricular duties came to 65 hours per week.

“Corporate” maintains a ruthless grasp over the revenues of all its schools. While the schools all belong to a federally categorized nonprofit, the revenues of the schools all filter upwards so that they can aggregate capital in the pursuit of further expansion. My charter school started out with a substantial endowment from Arizona business interests and the federal small-schools grant, and the board of directors used these resources to seek one mortgage after another. Instead of using its revenues to provide teachers a livable salary, the capitalists’ board calculated that it would be more profitable to open more sister schools less than ten miles away, despite there already being many other district and charter schools in the area—thereby contributing to a crisis of overproduction.

Many workers simply view charter schools as a less bureaucratic alternative to the public school districts. In reality, these schools are used to cut across class solidarity between teachers, something which came dramatically to the fore last year. During the “Red for Ed” movement in Arizona, many of my colleagues expressed apathy or even antipathy toward the district teachers’ struggle for higher wages and better benefits. The common talk in the office was that they did not want to hurt students’ education, or that charter teachers would not benefit from legislative change. The district teachers were framed as “greedy,” and the lobbyists employed by corporate were said to be seeking a solution for us. That’s why we were paying the lobbyists six-figure salaries, right? 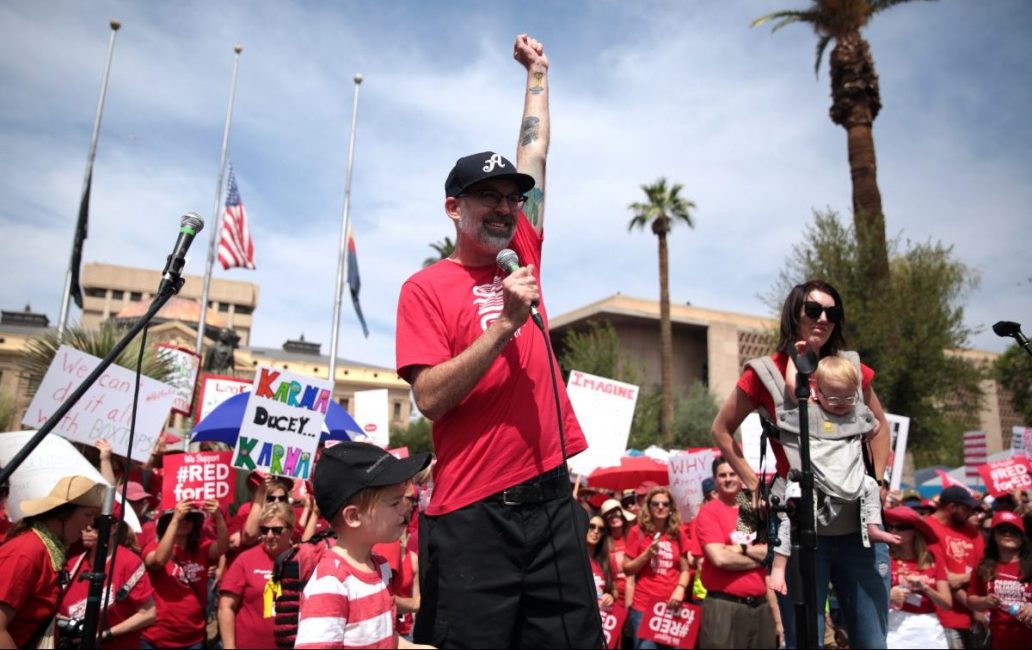 Charter schools are used to cut across class solidarity between teachers, something which came dramatically to the fore last year. / Image: Gage Skidmore on Flickr (CC BY-SA 2.0)

The charter school movement has put a further rift into one of the few well-unionized sectors of the American working class. The capitalists who direct the charter organizations not only divert public taxes into private hands, but also obstruct teachers’ unionization. It is no surprise that big business proponents like Betsy DeVos have invested in charter schools, in the hopes that further privatizing education will offer a fresh profitable market for exploitation.

Not only the Republicans but also the Democrats have been sharpening their knives to carve up public education. Arne Duncan, the former secretary of education under Obama, worked with Democrats for Education Reform to get Democratic hedge fund operators and philanthropists into the charter movement. We saw in 2018 that West Virginia and Arizona had to initiate wildcat strikes because their union leadership was unwilling to antagonize state government. Neither the bourgeois politicians nor the pro-business labor leaders can be trusted to fight in our interests.

At the time of writing, teachers in Oakland have gone out on strike, 19,000 teachers just won a two-day strike in West Virginia, 30,000 striking teachers in L.A. won significant concessions, and over 2,000 teachers in Denver concluded a successful three-day strike. Colorado teachers are among the lowest paid in the country, ranking 46th out of the 50 states. In response to the state’s performance-based pay incentives, the teachers voted in January to authorize a strike with 93% support. Their strike secured them an average salary increase of 11.7%. This is the way forward for all teachers in the fight against capitalist austerity!

In the fight against the privatization of education and the spread of charter schools, the growing examples of class struggle can inspire teachers and workers from all sectors of American education—including workers at charter organizations—whose working conditions are under constant attack. It is up to socialists to engage with these struggles with a program that can win over the next generation of class warriors for the revolutionary transformation of society. The real-world experience of life under capitalism is what radicalized me and why I drew the conclusion that, along with a desire to be an educator, fighting for socialism in my lifetime is my calling.