Riots in South Africa: the Poor Lash Out 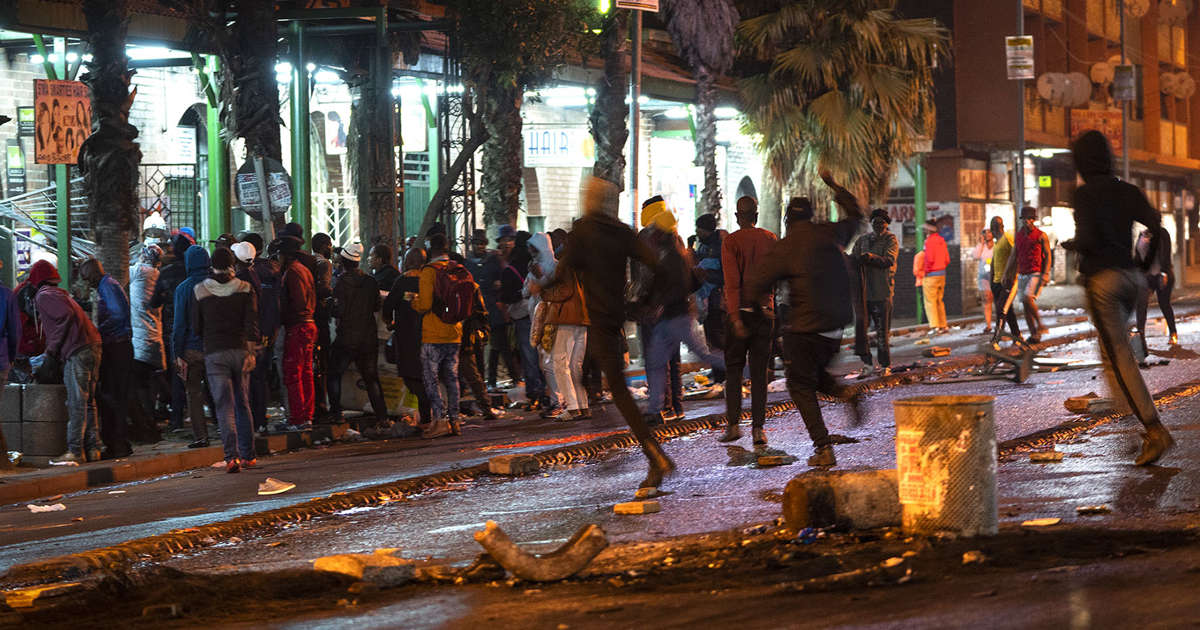 Last week, two of South Africa’s most economically important provinces have been rocked by widespread rioting. Riots in Kwazulu-Natal and Gauteng have been fueled by anger, desperation and frustration over deepening poverty and the economic impact of COVID-19 restrictions.

The riots started after the imprisonment of former president Zuma for defying a constitutional court order to give evidence at an inquiry investigating high-level corruption during his nine years in office. Sporadic protests started in KwaZulu-Natal last week, with Zuma’s supporters calling for his immediate release. The protests soon escalated.

Large crowds, describing themselves as Zuma supporters, blockaded freeways such as the N3 and N2 and torched 28 trucks on Friday. The M7, which is a strategic cargo transit route to the Port of Durban, and other provincial and municipal links were also affected. Several vehicles were stoned and public infrastructure was damaged, resulting in many commuters not being able to reach their places of work.

However, the immediate issue around Zuma has very quickly been pushed into the background. The rioting since Sunday is very different in character to that on Friday. It came after the government announced the extension of strict lockdown measures, which have hit some of the poorest layers in society especially hard. It is these layers that are currently leading the riots.

The country is currently going through a devastating third wave of the pandemic. For the poorest layers, who suffered the brunt of the lockdown measures, this was the final straw. The character of the riots and the composition of the rioters have changed again since Sunday. To reduce what is currently happening to Zuma is extremely superficial. The main targets are now  shopping malls, supermarkets, warehouses and shopping centers.

In other words, these riots are about hunger. They’re acts of desperation fueled by the severe damage the lockdown measures have caused. A young man told a television news crew: “I’m really not concerned about Zuma. He is a corrupt old man that deserves to be in jail. I’m taking things from the shop for my mum.” This represents the real character of these protests.

JUST IN – Every single store in the Jabulani Mall near Johannesburg has been looted. Reports and videos of riots at more malls in parts of South Africa.pic.twitter.com/t5DL96EVIM

The scale of the riots

The protests spread to areas in Johannesburg. In Jeppe, police struggled to disperse a group of hundreds of people who had barricaded the M2 freeway. There was destruction of property and looting. Crowds clashed with police and ransacked or set ablaze shopping malls in cities across Gauteng on Tuesday, with dozens of people reported to have been killed. More than 70 people have so far been killed during the unrest. More than 750 people have been arrested, while shops, petrol stations, banks and government buildings have been forced to close. On Tuesday, the state deployed thousands of soldiers to Durban and Johannesburg as police seemed helpless in the provinces of KwaZulu-Natal and Gauteng.

The scale of the riots is reminiscent of scenes from the 1980s, during the fight against apartheid. The port city of Durban, where the riots started over the weekend, has been engulfed in riots for days. The country’s largest crude oil refinery, which is situated there, has been forced to close. The protests quickly spread to other parts of the province, including Pietermaritzburg, the provincial capital.

It is not difficult to understand what is taking place here: it has been years in the making. The riots are a reflection of the depth of the poverty thousands of South Africans continue to live under day to day. The economy is struggling to emerge from the damage wrought by Africa’s worst COVID-19 epidemic, causing repeated restrictions on businesses to be imposed, which have harmed an already fragile recovery.

The crisis has widened the gulf between rich and poor. Growing joblessness has left people ever more desperate. Unemployment rose to a new record high of 32.6% in the first quarter this year. But the effects of the pandemic come on the back of years of deteriorating living standards. Even before the pandemic, unemployment stood at around 30%.

The crisis has exposed South Africa’s unemployment crisis. Even before the pandemic, the labor market has been marked by high levels of unemployment and inactivity. Out of a working-age population of almost 36 million people, only 15 million South Africans are employed. Youth unemployment is the highest in the world. Unemployment levels for young people aged between 15 to 24 stands at 60% are they in education or training. A whole generation has now grown up with this as their reality.

Since the pandemic, more than 2 million of the poorest workers have lost their jobs. The crisis has widened the gulf between the rich and poor. The COVID-19 crisis has made a difficult situation worse as low-wage workers suffer almost four times more job losses than high-wage workers. In 2021, we saw a modest recovery of jobs, but this is being destroyed by the restrictions of the third wave. All this amounts to a powder keg that was waiting to explode.

JUST IN – Widespread riots and looting have broken out across South Africa including Johannesburg, President Ramaphosa to address the nation at 8 pm.pic.twitter.com/avmrgQvlny

The crisis of capitalism is especially acute in South Africa. It is the vast majority of poor and working-class people who have suffered the worst effects of this crisis: mass unemployment, a lack of decent housing, inadequate education, landlessness, and rapidly falling living standards. The root cause of this situation lies in the capitalist system, which is unable to grant even the smallest concessions to the workers and poor.

Formal democracy was achieved in 1994 with the overthrow of the hated apartheid regime but the wealth of the capitalists was left untouched. South Africa remains a firmly capitalist country, tightly run and controlled by a small minority of capitalists, bankers, landlords, and giant multinational companies. They have been joined by a ravenous elite of upstart capitalists close to the ANC and the state.

The capitalist policies pursued by the ANC government since 1994, together with the worldwide crisis of capitalism, have resulted in economic stagnation. In fact, the economy had not recovered from the 2008 crash when it was hit by the disastrous effects of the coronavirus pandemic. Now the pandemic is further devastating the economy.

The economy contracted 7% last year as harsh restrictions to curb the spread of the disease in the first half of the year shuttered businesses and pushed up unemployment levels. The full economic damage caused by COVID-19 will only be clear after several months, and perhaps not until years from now. The crisis in the economy is having a catastrophic impact on living standards, making a hard situation utterly unbearable for millions of people.

The executives, of course, don’t depend on salaries alone, but also draw an income from other sources such as shares. Of course, it was not these overpaid fat cats who laid off when production stopped.

In South Africa, poverty exists amidst plenty. The country has a relatively well developed economy and advanced infrastructure. It is one of the world’s largest exporters of gold, platinum, and other natural resources; it also has well-established manufacturing, financial, energy and communications sectors.

Despite this, the majority of the people lead a precarious existence. Half of the population live in poverty. To feed a single person nutritiously for one month costs between 530 and 670 rand. A child support grant of 440 rand a month isn’t even enough to meet a child’s nutritional needs, while an old age grant of 1860 rand falls far below what is required to cover the costs of maintaining a family. This is the situation simply as regards food, before we take into account the cost of transport, rent, electricity, education, clothing, etc. The monthly minimum wage of 3,500 rand is nearly half the amount required to cover the basic costs of a household for one month.

The army was deployed to help the police restore order https://t.co/GSWq7shmGR pic.twitter.com/XOJvtgYu80

Eruption of the poor

Over the last period, there has been an ebb in the movement of the working class. To put it more correctly, the advanced guard of the working class has pulled back from a stormy period of intense struggle. A certain level of tiredness has set in. At the same time, the workers are desperately holding on in an economic crisis that has wreaked havoc on living standards. They are receiving the blows with the hope that the storm will soon subside. In the absence of a real revolutionary leadership, this is only natural. The ANC and SACP, which are the traditional organizations of the working class historically, were in government carrying out the bosses’ attacks on their behalf. Other organizations such as NUMSA failed to provide a revolutionary alternative, despite being in a prime position to do so. The same goes for the EFF.

As the floodtide of class struggle receded from 2013 onward, we have seen other layers go onto battle. There was the marvelous Fees Must Fall movement of the students, which revealed the revolutionary mood amongst the youth. It won some important concessions, however these have since been undermined, and the burden of paying for them has been placed on the shoulders of other layers of the working class. The main problem was that the movement did not connect with the general working-class movement—although the student movement did make some contact with workers fighting against outsourcing. Thus, the struggle remained a purely student movement, isolated from the general struggle against South African capitalism.

Students are an important auxiliary force to the workers. But the struggle of the students is no substitute for the struggle of the workers. The limitations of a purely student struggle could be seen at the height of the Fees Must Fall movement, where, despite all the talk of “total shutdowns,” nothing really was shut down other than the university campuses. The economy still functioned normally. The banks operated, the mines worked unhindered, the factories ran and the supermarkets were open. Only the working class could have shut down the economy and threatened the bosses where it really hurts—their profits.

In the absence of a major push over the last few years from the advanced workers, other elements have come to the fore, such as an upsurge in community protests of the urban poor and other more backward layers. The riots of the last few days are part of the same phenomenon.

These riots are a serious warning to the ruling class. They are a sign of the deep-seated anger and rage that is bubbling just beneath the surface, which is waiting for an outlet. The capitalist crisis has already produced revolutions, mass demonstrations, strikes and general strikes in one country after another. This is part of the same process.

But ultimately these riots will lead to a blind alley. The destruction of malls, supermarkets and shopping centers will do absolutely nothing to solve the problems of the working class and the poor people in society. In fact, it will harm workers who have been caught up in the destruction. Some businesses may close down, leading to more job losses. The main victims will be the poor people and the rioters themselves. The poor will remain poor after the riots are over. It also gives the state and the media the excuse to criminalize the poor and demonize everyone who fights for a revolutionary way out. In fact, these riots are expressions of impotent rage. The solution to the crisis of South African society is not to destroy supermarkets but to take them over together with the rest of the commanding heights of the economy under the democratic control and management of the working class.