Scotland Shakes the Establishment: The Fight for Socialism Continues 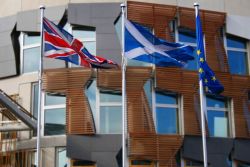 The Scottish Referendum produced a seismic shift in the political landscape of Scotland. The campaign shook up the whole of society and touched those who had never even voted before. The turnout was an unprecedented 85%, more than three and a half million people, bigger than any election ever held in UK history.

This alone makes it a political earthquake. Although the Scots rejected independence, they have sent shockwaves through the British political Establishment.

While the majority of Scottish people voted against separation, a massive 45% of people did vote for independence, a huge increase compared to anything before. This was a genuine expression for fundamental change. In the past few weeks, the “Yes” campaign gained a serious momentum. The September 5 YouGov poll put the “Yes” ahead and marked a watershed.

In Glasgow, the biggest city in Scotland, the Yes vote recorded 200,000 more votes than the No campaign. This meant that many hundreds of thousands of working class people from the housing schemes voted “Yes,” not in support of nationalism, but for fundamental change. The fact that over 1.6 million people voted to separate from Britain and its rotten Establishment is a sign of rising discontent with “austerity Britain,” which will not go away with the end of this referendum. Many “Yes” voters also saw it as a rejection of the “effing Tories,” to use Cameron’s own words.

Despite having won the referendum, the result is far from a huge victory for the “Better Together” campaign. Whilst even at the beginning of August most polls were placing them 10% ahead of “Yes”, by the end of the month the gap was rapidly closing.

The second debate on the August 25 was a key moment as Alex Salmond achieved a huge victory over Alistair Darling. Whereas in the first debate Salmond stumbled over the question of currency, in the second his focus on welfare proved far more popular. Placing himself as an advocate of reforms as opposed to “austerity Britain” led to a swing of Labour voters from 18% supporting independence in August to 35% in the early September YouGov poll. This swing and desire for change was reflected in the result. The four areas that voted “Yes”—Glasgow, Dundee, North Lanarkshire, and West Dunbartonshire—are all Labour heartlands that have suffered heavily from deindustrialisation in the past forty years.

The fear of a high turnout and a “Yes” vote shook the Establishment and led to the panicked promises of “modern Home Rule” and greater devolution from the “No” side. They will now have to deliver on these promises, despite opposition from Tory backbenches.

Despite the result, the “No” campaign was clearly tarnished by an unholy alliance of Labour, Tories, and Liberal Democrats, viewed with suspicion as the political establishment. Cameron, Clegg, and Miliband could not be seen on the streets for fear of being attacked. Labour in Scotland is viewed as further to the right than elsewhere in Britain, which played straight into the hands of the Nationalists. Whereas Alex Salmond put forward Obama-style “change” rhetoric, presenting himself as a social democrat, all three parties (including Labour) have bound themselves to austerity and could therefore only offer nothing but scaremongering.

Cameron and Co. arrogantly refused to put the option of Devo-max on the ballot, which would have had the support of the majority. Ironically, in their panicked response to increased support for “Yes” both Labour and Tories rapidly offered increased devolution as they tried to regain their lead.

There was an audible sigh of relief at the result from Westminster. Danny Alexander, Liberal Democrat MP, stated “the markets had responded well,” as if “the markets” were the electorate. But as Walpole stated, “today they will be ringing the bells, tomorrow they will be wringing their hands.”

For many in Scotland there is understandably disappointment and even anger at the result, seen as a missed opportunity to deliver decisive change. It was a dream shattered. Many on the left will also be very disappointed, as they see the vote as endorsement of the status quo. Some thought a “Yes” vote would have offered a more “progressive” Scotland with greater opportunities for socialism. This was the view of Tommy Sheridan and the SSP. “Voting Yes on September 18 unlocks a door to previously unreachable possibilities for working class people in Scotland,” wrote Colin Fox, the co-spokesperson for the SSP (Scottish Socialist Party). “It frees us from economic neoliberalism of the City of London that puts greedy pursuit of profit for a tiny elite ahead of satisfying the primary needs of millions… In an independent socialist Scotland no one is left behind…” (Scottish Socialist Voice, September 5-18  2014).

That ignores the little detail that socialism was not on the ballot paper! Salmond’s independence was always tied to capitalism and the British Establishment, promising to lower corporation tax on big business, retain the pound, keep the Queen as head of state, and join NATO and the EU. The reality is that as long as an independent Scotland remains tied to capitalism, we would remain tied to austerity. It is not just the nasty Tories at Westminster that are carrying out cuts. In response to the global capitalist crisis left and right governments across Europe are forced into adopting austerity measures as they attempt to save capitalism. A “Yes” vote would not have altered this fact. It would not just have been the case of the SNP carrying out cuts and subordinating itself to Western imperialism. Any party which does not put an end to the capitalist system would have to do the same. No part of the “Yes” campaign—from the SNP to the SSP and Radical independence Campaign—seriously posed an alternative to capitalism but only made vague promises of “progressive change.”

Others, like Billy Bragg, used the names of James Connolly and John MacLean to support nationalism. They left aside the little fact that these were great revolutionaries and Marxists, not nationalists. Above all, they were socialist internationalists. Connelly clearly warned the Irish that “You can hoist the Green Flag above Dublin Castle, but England would still rule you through her capital.” MacLean, who had lost faith in the British workers moving to socialist revolution, at least campaigned for a Scottish Workers’ Republic, namely the overthrow of capitalism. However, the 1926 General Strike only a few years later showed the revolutionary potential that existed throughout Britain.

Ever since the fall of the Soviet Union, it must be absolutely clear that socialism is international or it is nothing. Socialism in one country is not possible; this is even the more the case in a small country like Scotland. The fight for socialism needs the unity of the working class. We are stronger united and anything that divides the working class undermines that struggle. The claim that Scots are naturally more left-wing leaning than workers in the rest of Britain is false and is simply pandering to nationalist prejudices. It also plays into the hands of the British ruling class who wish to promote a conservative image of the English working class. This completely ignores facts such as that on the July 10 six trade unions went on strike in England, whilst only one struck in Scotland. There is enormous bitterness and anger in England and Wales against the Establishment and its puppet politicians. As in Scotland, there is a feeling of being continually let down. The unprecedented turnout in Scotland demonstrates this anger and a desire for change. If the Labour Party behaved as a real representative of the workers and campaigned for socialist policies it would win a landslide victory throughout the length and breadth of the British Isles. But the Labour leaders are shamefully tied to capitalism. It is up to the trade unions to change this.

The key issue for us is the class question. Workers in Glasgow have more in common with workers in Manchester than businessmen in Aberdeen. The British working class has historically formed together, and come out in struggle together. This continues up to the present. In November 2011 over 2 million public sector workers across Britain came out on strike. All British workers are united in our class interests and these interests lie in the overthrow of capitalism. It is only through the struggle for socialism, which relies on the utmost unity of the working class, that we can offer a real change through public ownership and the dismantling of the power of big business. Simply having a local Scottish capitalism, with its own capitalist class, can only guarantee further hardship for working people.

During the independence campaign many on the left forgot the question of class, and having lost their faith in the ability of the working class to achieve socialism, put everything into winning capitalist independence. Following the result, members of the left have already made statements about their shame and anger at the Scottish people for not voting “Yes.” It is scandalous to blame masses of people for this result, many of whom were fearful of a more business-friendly Scotland. As George Galloway said, it would pave the way “for a race to the bottom.” The left-wing of the “Yes” campaign abandoned a socialist alternative in order not to alienate their “allies” in the SNP.

As stated previously, the close victory for the “No” vote does not mean acceptance of the status quo. It is a far cry from an all-out victory for the British ruling class. Their relief should not dishearten us. The ruling class has been visibly shaken. The massive politicization surrounding this campaign, which drew in tens of thousands to meetings and rallies for the first time, is a tremendous gain. It is a reflection of a deep mood for fundamental change. We must work to link this mood, together with workers throughout Britain, to the fight for socialism.

The international situation shows that class struggle is far from being off the agenda, with movements continuing to take place across the world. We maintain our faith in the working class and its ability to overturn this rotten capitalist system—in Scotland and throughout the whole of Britain. In Scotland we will go forward retaining an internationalist, class-based outlook at the forefront of our minds. The only answer to our problems and to those of workers everywhere, is the overthrow of capitalism in Britain as part of an international socialist order. We appeal to all those fighting for change in Scotland to join us.