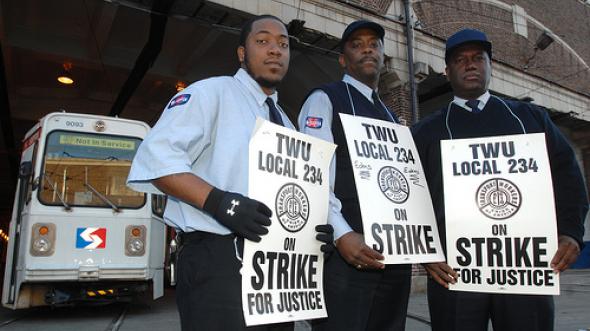 Facing a strike that would paralyze transportation in Southeastern Pennsylvania, Republican Governor Tom Corbett scrambled for help. He appealed to President Obama who, within 24 hours, intervened with an executive order assembling a Presidential Emergency Board to “investigate the contract disputes.” Obama’s order forced the striking workers back to work for 120 days of arbitration. This is yet another example of Obama and the Democrats working “across the aisle” with their Republican counterparts—to the detriment of the working class.

This comes after four long years of government-mediated contract negotiations between SEPTA and International Brotherhood of Electrical Workers (IBEW) Local 744 and Brotherhood of Locomotive Engineers and Trainmen (BLET), as legally required by the Railway Labor Act, which imposes especially constraining restrictions on workers in this sector to exercise their right to strike.

The contracts of the IBEW and BLET workers expired in July 2009 and July 2010, respectively. Since that time, SEPTA management has budged little on the unions’ demands on wages, which were largely aimed at achieving levels comparable to the slightly better contracts of other SEPTA workers organized by TWU Local 234—whose contract with SEPTA has now also expired (in March of this year).

Local 234 has been on strike 8 times since 1977, shutting down buses, trolleys, and subways in Philadelphia for a total of 242 days. TWU Local 234 has been described as “the most strikiest union there is in Philadelphia.” But the June 14 strike of IBEW and BLET workers is the first in 31 years to affect the regional rails of SEPTA; the last “big one” being a 108-day strike in 1983.

The prospect SEPTA faced on June 14 was a perfect storm—all of the SEPTA unions striking at once. This explains the extreme haste of Governor Corbett and President Obama in using antilabor legislation to force the workers back to work. Now SEPTA’s hopes rest in fighting a war of attrition: dragging out the negotiations until they can demoralize the workers into accepting an even less acceptable contract. Without a militant leadership mobilizing and educating the membership, building community support, and building inter-union working class solidarity, these attrition tactics eventually take their toll.

Similar struggles are ahead in New York City, with the potential strike of the Long Island Rail Road (LIRR) workers against the Metropolitan Transit Authority (MTA). The MTA is playing hardball, much the same as SEPTA. It is all part of a generalized assault on the standard of living of the working class. A winning strategy must be prepared and implemented, and no truly winning strategy can be found in isolating any particular union, workplace, industry, region, or country.

The biggest potential strength of the IBEW, BLET, and TWU—and the labor movement as a whole—is their unity. Steps must be taken to formalize the bonds between all SEPTA workers to fight side by side, drawing in support from the millions of workers in the Philly metro area—both organized and unorganized.

Laws like the Railway Labor Act and Taft-Hartley weren’t written to achieve some sort of utopian harmony between the bosses and workers; they were written to defend the interests of the capitalist class. With cuts and austerity on the order of the day at every level, the labor movement must be armed with a leadership prepared to defy these laws if necessary, and armed with a political party of our own to fight these laws politically. A mass labor party could organize the struggle for workers’ political power in the US. With the working class at the helm we can build a society not of cuts and austerity, not of crumbling infrastructure, but of plenty: socialism.