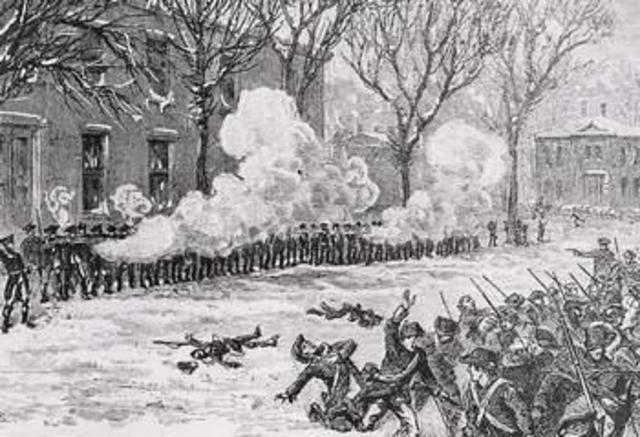 Originally published in the book Marxism and the USA.

There is a stage in every great revolution when the masses – or at least the most militant section of the masses – begin to feel that they have been cheated of the fruits of victory, that power is slipping through their fingers and they have to act to prevent this from happening. A desperate minority moves to take power and is crushed. This marks a decisive turning point in the revolution, where the conservative wing crushes its former allies and proceeds to consolidate its power as a new ruling class. This stage in the American Revolution was Shays Rebellion.

When the cannons had fallen silent and the smoke had finally cleared from the battlefields, the small farmers, workers and artisans who had done all the fighting looked around them and saw that they had gained nothing from the Revolution. They were crushed by debts and taxes. Interest rates were charged at up to forty percent. Poor settlers, crossing the mountains in search of land, found the best farming country in the hands of land companies. All the power was in the hands of the rich –the merchants, the landowners, the moneylenders. Runaway inflation made money worthless. To make matters worse, the war was followed by a deep trade depression that lasted from 1783 to 1788. Prices and taxes soared. As a result, thousands languished in debtors’ prisons. In Massachusetts alone, 90 percent of those in prison were debtors. The discontent of the masses reached boiling point.

There were serious uprisings in Massachusetts. In New Hampshire a mob of several hundred men marched to the legislature with clubs, stones and guns to demand relief. The rebels assumed (erroneously) that the problem was a shortage of currency. “Print money and lower the taxes” was their slogan. But there is no doubt that the high taxes fell disproportionately on the poor. They particularly targeted the courts where moneylenders would secure eviction orders against poor farmers who had fallen into debt. In the New York Picket of September 11, 1786 we read:

“On Tuesday the 29th [of August] … the day appointed by law for the sitting of the Court of Common Pleas […] there assembled in the town from different parts of the county four or five hundred people some of whom were armed with muskets, the others with bludgeons, with the professed intention to prevent the courts from proceeding to business […].”

This movement culminated in what was known as Shays’ Uprising – an armed insurrection led by Captain Daniel Shays, a former officer in the revolutionary army, and now, like so many others, a ruined small farmer. About 1,000 men armed with muskets, swords and clubs, succeeded in closing the courts for several months. Leo Huberman writes:

“The upper classes throughout the country were thoroughly frightened at this armed uprising of the poor people. There was no money in the treasury to pay the state troops, so a number of rich people contributed enough to do so. Shays and his followers headed for Springfield, where there was a public storehouse containing 7,000 muskets and 13,000 barrels of gunpowder, stoves, camp kettles and saddles. They were stopped by the state troops, a few shots were fired, and the mob dispersed.” (Leo Huberman, We the People, p. 94.)

It was at this time that Thomas Jefferson made his famous remark that the Tree of Liberty must be watered from time to time by the blood of patriots. He also wrote that “a little rebellion now and then is a good thing, and as necessary in the political world as storms in the physical.” However, this view was anathema to the majority of the American ruling class. Again, Gore Vidal accurately expresses the views of the oligarchy in the following imaginary dialogue between George Washington and Aaron Burr, a controversial figure in the American Revolution and the central figure in his novel of that name:

“Washington spoke through me, but not to cut me off: he was going deaf and did not hear half what was said to him. ‘When word came to me of the treasonous acts of a certain Captain Daniel Shays – a dirty fellow once known to me – it was apparent that we must have a strong government to protect our property. Mr. Hamilton concurred with me and we summoned a constitutional convention at which I, at great personal sacrifice, let me say, presided. I regard, Sir, that convention as the most important event of my own career. Because had we not invented this federal government, they would have taken away everything.’

“The face was dark with sudden color. The hands that were stretched to the fire trembled. ‘By now that Massachusetts rabble would have divided all property amongst the worthless classes. Not even your French have dared go so far. This is not natural, I said at the time. This must be stopped. We did not fight and win a war with a despot across the sea to be in turn tyrannized by a bloody mob whose contribution to our victory, if I may say so, was considerably less than that of those gentlemen who sacrificed all that they had in order that we be a separate nation. So what we won in that war we mean to keep, Colonel Burr. And I am sure that you agree with that sentiment.’” (Gore Vidal, Burr, p.192.)

The true significance of Shays’ rebellion can only be understood in class terms. Later general Knox wrote to George Washington to explain the dangerous character of the ideas of the insurgents. In particular, Knox said that the rebels believed that “the property of the United States has been protected from […] Britain by the joint efforts of all and therefore ought to be the common property of all.” He added: “Our government must be braced, changed, or altered to secure our lives and property.” (Quoted in W.E. Woodward, op. cit., p. 228, my emphasis, AW.)

The rebellion was crushed and fourteen of its leaders, including Shays, were sentenced to death, though later pardoned. In Shays’ rebellion, the masses, feeling that the power that they have fought and died for is slipping from their hands, tried desperately to seize the initiative again. But the movement was doomed to defeat. The class nature of the American Revolution of the 18th century was objectively bourgeois. It could not go beyond the limits prescribed by the capitalist mode of production. Consequently, the attempt of Shays to do so was condemned in advance to failure, as the similar attempt of the English Levellers and the Left Wing of the Puritans was condemned to defeat over a century earlier in England.

The challenge thrown down by Shays terrified the oligarchy that was quietly concentrating political and economic power into its own hands. They understood the need to create a strong state power immediately as a bulwark against the masses. At the same time they were under the pressure of the masses.