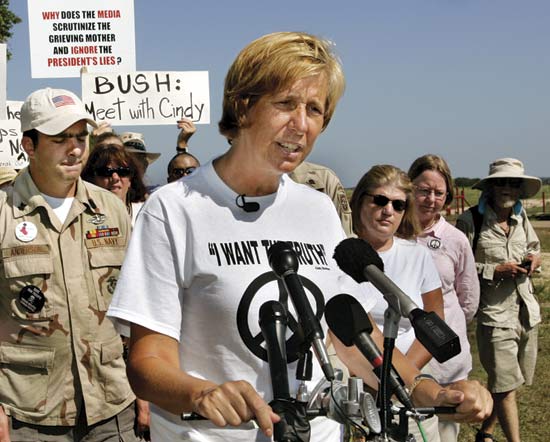 As the Iraq War drags into its sixth year, there seems to be no end in sight. 57 percent of Americans are in favor of  immediate withdrawal. In a Presidential election year, many are looking to the Democrats for a way out. But their record speaks for itself: they have been the greatest enablers of the war since it began. One of the most blatant enablers is Nancy Pelosi, who became Speaker of the House after the Democrats took control of Congress on a wave of anti-war sentiment back in November 2006.

But Pelosi, who continues to vote billions of dollars to continue the war and has “taken off the table” any inquiry into the legality of the war, is being “called out.” Cindy Sheehan, who first rose to national anti-war prominence based on her emotional and vocal condemnation of Bush after her son Casey was killed in Iraq, is running against Pelosi in California’s Congressional District 8 (San Francisco). She is running as an Independent on an anti-war, pro-immigrant rights, and pro-worker platform.

While we may have this or that difference with some of Sheehan’s tactics or platform, which has yet to be fully fleshed out, the Workers International League endorses her campaign for the House of Representatives. The most important aspect of Sheehan’s electoral effort is that she is running a campaign that is politically independent of the Democrats, and against one of that party’s most recognized public figures. Pelosi sits in one of the most anti-war districts in the country, and although she often poses as “antiwar,” she has consistently opposed an immediate withdrawal from Iraq.

Sheehan’s campaign has the potential to bring many issues that affect working people to the forefront. And although her campaign will be centered in San Francisco, it has the potential to generate interest on a  national scale. Sheehan is not just any anti-war activist, and Pelosi is not just any incumbent Democrat. Also notable is the fact that Sheehan has worked tirelessly to build a strong and united antiwar movement in the face of constant and often vicious attacks by the media.

Independent action by the working class is crucial if we are to build a truly powerful anti-war movement. It is therefore critical that the movement break from the grip of the Democratic Party. Sheehan’s campaign offers a glimpse of what is possible when such a break is made. For example, she gave her full support to the International Longshore and Warehouse Union (ILWU) workers’ May Day strike action, in which thousands of West Coast dock workers engaged in an eight-hour work stoppage to protest the war in Iraq. Their action received a sympathetic echo from as far away as Vermont as well as internationally, setting a leading example of how the working class, if united and organized, can act to stop the war.

While Pelosi completely ignored this important development, Sheehan was at the ILWU rally to offer her support. Later on May Day, Sheehan spoke at a rally demanding unconditional amnesty for immigrant workers. If elected, Sheehan could give voice to these and other important issues in Washington. But simply winning would not be enough. She would be confronted by powerful interests who would seek to isolate and demonize her. The only way that winning such a position could be effective is by building a broad base of support in District 8 and across the country, that could challenge the parties of big business.

The WIL is in favor of a mass party of labor to represent the interests of the working class majority of American society. However, as such a party has not yet been formed, campaigns such as Sheehan’s give voters a concrete example of what is possible outside the narrow confines of the Republicans and Democrats, of the kinds of independent political campaigns that could be run in order to mobilize anti-war forces, the labor movement, immigrant and Black workers, etc.

We urge all unions in California’s District 8 to break with the Democrats and to work to build Sheehan’s campaign. Similarly, unions across the country should consider the possibility of running their own candidates, independently of the Democrats, using these campaigns to address issues of importance to the working class. For example, to stop funding the war and to start funding health care, education, housing, transportation, etc. The unions, with their mass base and significant organizing and financial resources are the basis on which a mass labor party can be formed, which could run campaigns on a national scale.

For all those antiwar activists who have marched in the freezing cold or blazing heat, spent time and money to attend meetings and protests, and the million and one other sacrifices we make to build the anti-war movement, remember that Speaker of the House Nancy Pelosi said anti-war activists are “a waste of time” and that “if they were poor and they were sleeping on my sidewalk, they would be arrested for loitering, but because they have ‘Impeach Bush’ across their chest, it’s the First Amendment.”