Single-Payer and Governor Shumlin in Vermont 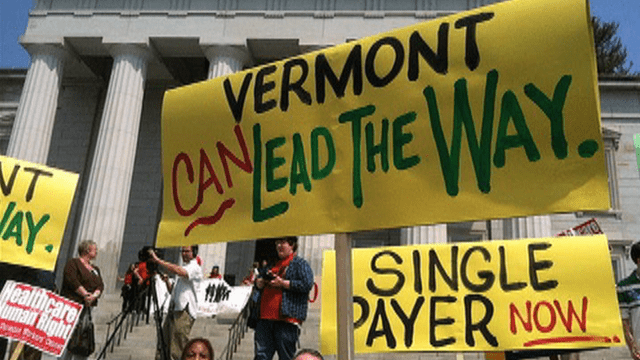 On December 17, Democrat Governor Shumlin of Vermont abandoned plans to implement Act 48, legislation from 2011 that was supposed to make Vermont the first state in the country to have “single-payer” health care. A wolf in sheep’s clothing for the working class of Vermont, Governor Shumlin concluded that implementing Act 48 would hurt the economy, because in order to pay for the expanded health coverage, a payroll tax and a progressive income tax of zero to 9.5% would need to be put in place.

Ignoring the facts, for example, that the tax increase would be lower for most people than the premiums they pay on private insurance, such that single-payer would actually save Vermont $118 million dollars, while providing health insurance to everyone in the state, Governor Shumlin has provided ammunition for the right-wing ideologues who argue that single-payer health care is wasteful and costly. Shumlin’s actions were certainly disappointing to all the advocates of single-payer and the working class of Vermont, without whose support he probably would never have gotten elected. In his own words:

“When I entered the five-way Democratic primary, I was the last candidate in, and I was polling fourth out of five. Most people thought it was a fruitless effort. I was the only candidate in America to make ads that said, ‘If you elect me governor, we are going to pass single-payer healthcare.’ The grassroots support I got from single-payer advocates made it possible for me to be governor. They knocked on doors. They poured their hearts out. They saw an opportunity, and I would not be here without them.”

This highlights the class interests behind the Democratic Party, which represents big business, while pretending to be a friend of the working class. With friends like that, who needs enemies!

ACT 48: A failure for single-payer from the beginning

While many people had honest illusions that Act 48 could begin to end the suffering caused by the lack of access to health care, the legislation was never meant to live up to the aspirations of the people who fought for it. As the act did not aim to do away with the private health insurance companies operating in the state, many of the benefits of not having to pay for health insurance CEO’s salaries and bloated administrative costs would be lost. In fact, lawmakers removed the word “single-payer” from the legislation. The legislation would mainly expand the state Medicaid plan to cover those who weren’t covered by other forms of health insurance.

One key benefit to having a single-payer system—a national, socialized health plan for all—stems from eliminating the enormous wastefulness of private health insurance due to the enormous amount of time physicians must spend filling out different insurance forms for different patients.

If the economic argument doesn’t persuade you, consider the fact that 45,000 Americans die each year from lack of health coverage, something a socialized health plan could remedy. Furthermore, a national health service, by its very nature, must be nationwide in character, not something that can operate in isolation in a single state, if it is going to guarantee equal access to health care for everyone. As one physician advocate for single-payer, Dr. Andrew D. Coates put it:

“‘Single payer’ is shorthand for a reform that will replace the present wasteful and chaotic system of private health insurance, Medicare, Medicaid, and out-of-pocket cash payments with a single public finance system that will redirect resources in order to guarantee access to all necessary care for everyone, which would include many essentials not covered by any present plan.”

There are many well-researched arguments that show that a single-payer system would help the economy by reducing the burden of health care costs. Many other countries with national health plans spend less per patient but have better health outcomes than the United States. Yet despite the sheer amount of human life lost due to the irrational system we have in place, there is no indication that Congress or the President are ready to enact a socialized health plan, something a majority of Americans and health care workers favor. If it escapes your logic, it is because capitalism has a logic of its own: profit for the few. Nor should the lack of political action should come as a surprise, as neither the Democrats nor the Republicans represent the working majority. Without a labor party to fight for such positive reforms, US workers will remain in the grips of big business and the politicians.

The Affordable Care Act (“Obamacare”) only strengthened the health insurance industries, by forcing people into their market. Indeed, the major insurance companies are reporting record-high profits (and record-high CEO salaries). Implementing a socialized national health plan will not be easy. The health care industry spent more than $5.36 billion lobbying in Washington since 2000—far outspending the defense and aerospace industries ($1.53 billion), and the oil and gas industries ($1.3 billion)over the same period. The job of implementing a health care plan that provides free, universal coverage can’t be left to politicians in the back pocket of the insurance companies.

As long as the pharmaceutical industry and the hospital and clinic systems remain privately owned—whether or not they are “not-for-profit”—they must operate under the logic of capitalism, which means they will charge as much as they can for as little outlay as possible in order to maximize their returns. As Marxists, we recognize that single-payer is only one component of the battle to guarantee quality health care for all. This is why we fight for the nationalization of the entire health care sector so that it can be placed under the control of the working class. Only a labor party, armed with a socialist program, can accomplish this.

Florence Nightingale once said, “Were there none that ever hoped for better, there would never be any better.” However, we need to do more than hope—we need to fight for a better and entirely realizable future. Join the International Marxist Tendency and fight for the revolutionary change of society so that society’s immense resources can be used for the benefit of everyone, rather than used for the profits of a few. In the year 2015, a system that can’t guarantee something as basic as access to quality health care to everyone has lost its historical mandate to exist.