In the early hours of Saturday morning, November 8, the Central Executive Committee of South Africa’s largest labor federation, COSATU, voted by a margin of 33 to 24 to expel its biggest affiliate, NUMSA, from the federation. This decision will have far-reaching consequences not only for COSATU, but for the liberation movement and the direction of the class struggle.

This was yet another momentous episode in the struggle of the pro-capitalist leadership of the ANC, with full backing from the SACP leaders, to sanitize COSATU and drive any opposition elements based on the class struggle out of it. The next target is the federation’s general secretary, Zwelinzima Vavi himself, who refused to sign NUMSA’s expulsion letter and was not present at the press conference in which it was announced publicly.

The outcome of the meeting was never in any doubt. The CEC is dominated by a right-wing clique  hopelessly out of touch with the plight and struggles of the workers. This clique is led by the likes of Frans Baleni, the general secretary of the National Union of Mineworkers (NUM), and the president of COSATU, S’dumo Dlamini.

Under Baleni’s leadership, the once-mighty NUM has degenerated into a shadow of its former self. The extent of its demise was fully exposed in August 2012 when the union failed to represent the workers on the platinum belt, leading to the wildcat strike in Marikana which ended with dozens of mineworkers shot dead by the police. After the massacre, tens of thousands of workers left the NUM and joined other unions like AMCU.

On the same side is Dlamini, who sits on  executive bodies of the ANC and the SACP. The president of COSATU traditionally plays a unifying role. Not Dlamini! He is probably the most divisive figure in COSATU’s history and the ring leader for NUMSA’s expulsion. These are the type of leaders who are sitting in COSATU House and who are presiding over the biggest crisis ever in the history of the workers’ organization.

But the CEC is not a representative body of the COSATU as it exists on the ground. The decision to expel NUMSA was taken by 33 people, the majority of whom had no mandate to do so from the rank and file.

The NUMSA leadership had no illusions about what awaited them. Before the meeting started on Friday morning, NUMSA president Andrew Chirwa said: ““We are on our way to the slaughterhouse where Numsa will be slaughtered today.”

As the meeting dragged on, news came out of what NUMSA’s general secretary, Irvin Jim, was telling  the CEC. He delivered a comprehensive 29-page document answering all the trumped-up charges against the union. He told the CEC: “We have reviewed the so-called charges against us, as far as we know what they are, and we have shown that at the bottom of them all is one thing: you, the Cosatu leadership, remain loyal to the ANC, SACP alliance, despite all the evidence that this loyalty is misplaced. In fact you are more loyal to this class alliance than you are to your working class brothers and sisters.

“You want to expel us because we constantly remind you how you are failing to protect the interests of the working class. We want to make one thing clear to you: inside or outside Cosatu, we will not stop mobilising the working class on the road to socialism. We will not give you any peace as we expose the miserable failure of the class alliance you are entangled in and how it compromises your ability to lead the working class.” 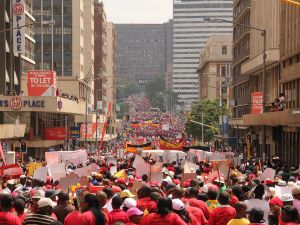 It is language such as this, its open use of Marxist terminology, and its clear class position, which is the real reason NUMSA is expelled from COSATU. Over the whole of the last period, under the rising class struggle, NUMSA had become the the country’s biggest union and the best reflection of the mood of the working class. Thousands of workers from different sectors of the economy are flocking to it, pushing the union more and more to the left. This comes at the time when the ANC has made a sharp turn to the right with the implementation of mass privatization of infrastructure such as roads, the rising cost of living, the implementation of out-and-out capitalist policies such as the misnamed National Development Plan, and the massacre of workers at Marikana. What we have here is the presence of opposing class interests—those of the working class, and those of the capitalist class.

All the other charges—recruiting outside its scope, failing to support the ANC, etc.—are all just a red herring. NUMSA answered them comprehensively in Jim’s three-hour presentation. Despite this, it allegedly took just a few minutes after Jim completed his submission for the right wing to decide to vote on NUMSA’s expulsion. This finally proved that NUMSA’s fate was predetermined. In this single calculated and cynical act, the right wing decided to plunge one of the world’s most powerful labor federations into its biggest disaster.

NUMSA remained defiant. On Sunday, it announced that it will crisscross the country to take this issue to the ranks of its members. It called on its shop stewards to continue to attend COSATU shop stewards’ councils. This is correct. NUMSA has not been expelled by workers, but by a right-wing clique. The union also announced it will hold mass general meetings involving the ranks of COSATU.

On Monday, November 10, seven of COSATU’s affiliates—SACCAWU, SASSAWU, PAWUSA, CWU, FAWU, SAFPU, and DENOSA—announced that they are suspending their participation in COSATU’s leading bodies, and also that they will go to the ranks to decide the way forward. They have also called for a special congress of COSATU where the workers will decide the future of the federation.

While the right wing has been holed up in COSATU House, NUMSA has already met workers at plant level on Monday in the Eastern Cape.  Early reports suggest that the workers have given the leadership a mandate to fight to win back COSATU by demanding a special congress of the federation. This demand can have a much wider impact than what the right-wing COSATU leadership might imagine. COSATU has a proud tradition of being based on worker control and accountability. The unity of the majority working class in one single federation is a precious achievement which should be preserved and strengthened, but this can only be done on the basis of internal democracy and the intransigent defense of workers’ interests.

This is the correct way forward, and NUMSA and those who support it should launch a campaign among their own ranks, but also extend it to the ranks of those unions whose leaders voted for NUMSA’s expulsion. The issue should not be turned into one where unions take one side or another on the whims of their leadership, but it should be taken to the rank-and-file members and shop stewards. This cannot be a battle between those who are in favor or against NUMSA; it needs to be turned into a battle of class collaboration and pro-capitalist policies vs class-struggle and socialist policies. If it is posed in these terms, the battle can be won, not only within COSATU as a whole, but even taken into the ranks of the SACP and the ANC.

NUMSA’s expulsion from COSATU is having a seismic effect on the whole South African political and social landscape. It is one of those “big events,” which is having a profound effect on the consciousness of the working class. The Marikana massacre was another. The rapid succession of these events will leave a lasting legacy on the minds of workers, and come at a time when the class struggle has warmed up enormously over the last few years.

As we said earlier, whatever happens now, we are seeing the beginning of the end of the Liberation movement as it has existed in the past. It is breaking up along class lines. South Africa has entered its most unstable period in its history. At bottom, it is a reflection of the unstable global situation. In one country after another the tectonic plates are shifting. This is not just true of geography, but also for politics, the economy, and the class struggle. Capitalism is now in its biggest crisis ever, and this is having a profound effect globally on the minds of people. The only way to solve the problems of the working class is to fight for the overthrow of this rotten system. South Africa, with its mighty working class, is vital for the victory of the proletariat over the bourgeoisie.