In the news coverage, public statements, and official explanations surrounding the coup attempt by Donald Trump and Juan Guaidó, the liberal hypocrisy of the ruling class is breathtaking. How can a country like Spain, where hundreds of Catalan civilians were physically beaten to suppress the 2017 independence referendum, demand that “fair, free and transparent elections” be held on the other side of the Atlantic Ocean? How can a man like Emmanuel Macron, deeply unpopular, the tyrant and tear-gasser to the gilets jaunes, denounce another head of state as repressive? However, now and then, an individual from the ruling class comes along who is unburdened by such needs for public justifications, a zealous and undisguised mover and shaker behind the scenes of counterrevolutionary intrigue. That man is Elliott Abrams, newly appointed US Special Envoy to Venezuela.

The 1980s were a heady decade in American politics in which the administration of Jimmy Carter was deemed insufficiently anticommunist. Carter’s military and foreign policies were carried out by the likes of Zbigniew Brzezinski and Robert Komer; his union-busting austerity policies, by neoliberals like Paul Volcker and Alfred E. Kahn. The new crop of officials around the following president, Ronald Reagan had an ambitious task: not just to continue the rightward momentum drift under Carter—but also to step it up. Among the enthusiasts of this mission would be Reagan’s Assistant Secretary of State for Human Rights and Humanitarian Affairs, Elliott Abrams.

In Latin America, death squads and “Dirty Wars” marked Abrams’s tenure. The bloodbath in Guatemala that culminated in the regime of General Rios Montt can be traced back to the 1954 CIA coup against the elected, leftist President Jacobo Arbenz. But by 1982, when Rios Montt, an officer long ago involved in the anti-Arbenz coup, seized the reins of power for himself, international scrutiny had circled around what was clearly a catastrophe in human terms. In response, Abrams fought a campaign to convince Washington skeptics that Rios Montt was in fact reducing violence, and should be rewarded by increased military aid. In reality, as journalists and activists (whom Abrams disparaged) explained to the world, the Rios Montt regime waged an ethnic genocide in which, in one example, “the army herded the entire population into the courthouse, raped the women, beheaded the men, and took the children outside to smash them to death against rocks.”

Abrams had a friend in El Salvador in the government that was fighting the FMLN. In 1982, the El Mozote massacre was perpetrated as part of scorched earth warfare against a civilian population. Nearly 1,000 civilians were massacred, mainly children, women, and the elderly, with the knowledge of Washington via the CIA and the Salvadoran military. Abrams publicly dismissed media reports of the atrocity. The survivors described the sexual abuse of children, babies impaled by bayonets, and the smell of burning flesh.

The Washington establishment eventually turned on Abrams and his colleagues, not for their sponsorship of blood-curling barbarity, but for the involvement of Iran in the Contras scandal. Abrams, who was in charge of the Nicaraguan Humanitarian Assistance Office front, was strikingly direct and unapologetic in his testimonies. The investigation resulted in his criminal conviction, which was followed by a presidential pardon. Lost in the legal hullabaloo was the fact that the fundraising-by-drug-money scheme significantly propelled the continental narco-economy. This was at a pivotal moment in the rise of the Mexican cartels around the figure of Felix Miguel Gallardo (who was supported by CIA elements as the Kiki Camarena case blew wide open); Gallardo in turn was linked to the Colombian cartels, who fought alongside the CIA against communist guerrillas (e.g. Autodefensas Unidas de Colombia). In more ways than one, Elliott Abrams helped push Latin America into bleak reaction and narco-capitalism.

Jimmy Carter’s lauded ‘humanitarianism’ aimed to give the image of anticommunism a public face. As Brzezinski explained, in the conditions of the cold war, the fact that US imperialism could cover itself in a friendly disguise of liberalism was an “instrumental utility”. This is well illustrated by Abrams, who himself was a representative of establishment bourgeois anticommunism, going from Hubert Humphrey collegiate liberalism at Harvard to the heart of Reagan-era neoconservatism. As journalist Eric Alterman described: “Political neoconservatism, nurtured in Washington, was a parallel development to that of the New York neoconservative intellectuals, though instead of Marxists becoming Nietzscheans, Democratic Cold War anticommunists became Republican Cold War anticommunists.”

Another indicator of Abrams’s outlook can be found in the comments of his wife, Rachel Abrams. In a 2011 blog post, she described Palestinians as “slaughtering, death-worshiping, innocent-butchering, child-sacrificing savages who dip their hands in blood and use women—those who aren’t strapping bombs to their own devil’s’ spawn and sending them out to meet their seventy two virgins […]—and their offspring—those who haven’t already been pimped out by their mothers to the murder god—as shields, hiding behind their burkas and cradles like the unmanned animals they are, and throw them not into your prisons, where they can bide until they’re traded by the thousands for another child of Israel, but into the sea, to float there, food for sharks, stargazers, and whatever other oceanic carnivores God has put there for the purpose.” 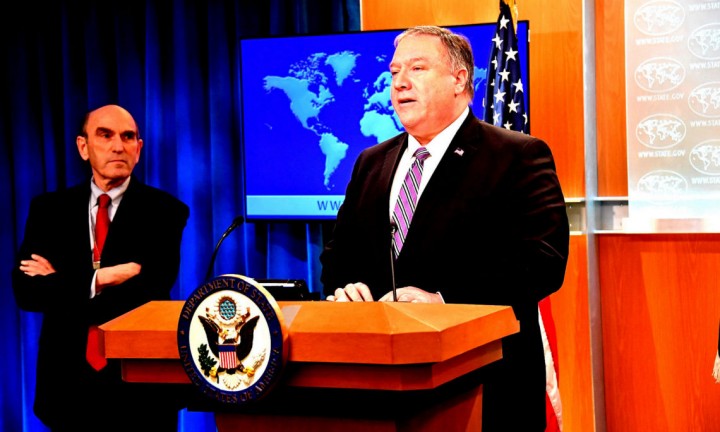 Abrams’ record reveals the “humanitarian” intentions of Donald Trump and his friend and puppet Juan Guaidó in Venezuela. / Image: USMOAS

Elliott Abrams was made George W. Bush’s specialist in Middle East affairs on the eve of the Iraq War. This post gave Abrams great power over the lives as well as the deaths of Palestinians. In this capacity, Abrams played a personal role in supporting Israel’s war with Lebanon, as well as the repression of the 2006 Gaza elections which culminated in Operation Summer Rains. His fingerprints can also be found all over Bush’s hawkishness towards Iran and Syria, which in Iraq meant an anti-Shia sectarian turn in US intrigue, directly prefiguring the rise of Islamic State.

As Reagan’s man in Latin America and Bush’s in the Middle East, Abrams may be singularly responsible for the record level of refugee displacement and migration. His appointment to the administration of Trump, who made his political fame by vilifying migrants from Mexico and Central America and championing their deportation, is entirely appropriate—and revealing as to the “humanitarian” intentions of Donald Trump and his friend and puppet Juan Guaidó.