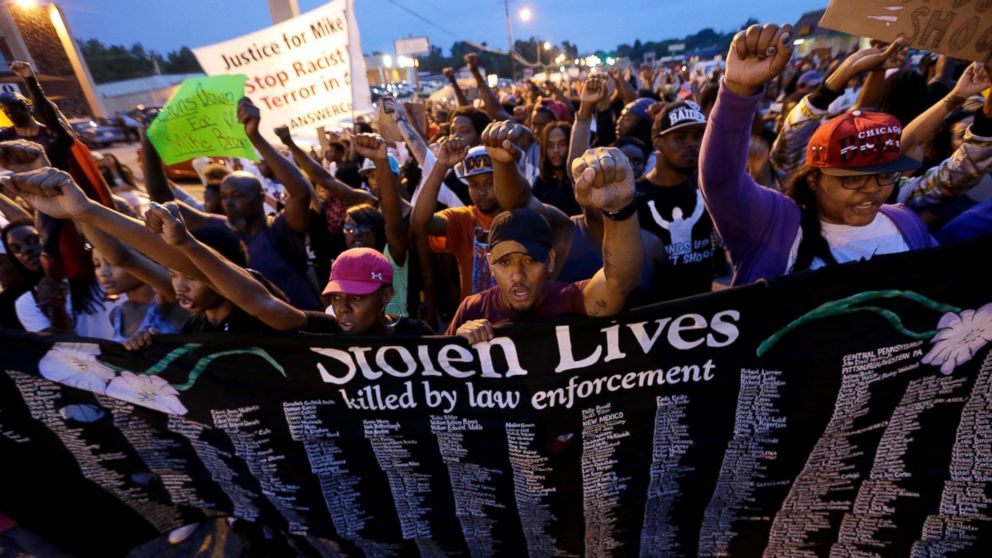 For the past several weeks, the eyes of the world have been focused on the relatively small St. Louis suburb of Ferguson, MO, the site of the August 9 execution of an unarmed black teenager, Michael Brown, at the hands of police officer Darren Wilson.

Millions across the country and around the world are asking, how could this happen? The case itself raises important questions on the nature of the state—and the state of racism in American society—that have been bubbling under the surface for decades. It has opened a vigorous discussion on these and other questions throughout the St. Louis area, particularly among young people, who are the lifeblood of the protest movement.

This discussion has extended well beyond the borders of the city proper. Ferguson itself is a suburb, and far removed from the “urban” environment as mistakenly described by many (particularly national and international) news agencies. The discussion is also taking place in the Metro-East, that is, the eastern (Illinois) side of the Mississippi River.  On August 27, the Youth for International Socialism (YFIS) club at Southern Illinois University Edwardsville (SIUE) held a forum titled, “Justice for Michael Brown: Enough is Enough!” to present a Marxist analysis of the events in Ferguson and the role of the state in capitalist society. This forum also offered a much needed opportunity for the campus student body to publicly discuss the situation and vent their frustrations.

The initial idea was to present a relatively small event featuring a targeted, theoretical discussion of the role of the state from a Marxist perspective, as one of many campus events on the subject of the killing of Michael Brown. However, it became clear rather quickly in the planning process that the initial idea would need to be expanded, because no other campus-wide events were being planned. The club had originally procured a space called “The Friends Corner” of the Lovejoy Library on the SIUE campus. However, the Chancellor himself called and had the original event location canceled, judging the event potentially too large for that space.  The other reason given—that the campus administration wanted to oversee all Ferguson related events—was hard to swallow, since there have not been any, with the single exception of a “balanced” forum that took  place a week before students arrived on campus with only two students (both grad students) in attendance.

The administration’s actions forced YFIS to find a different location, choosing the Goshen Lounge, a “center court” in the student center building. The forum ended up having an attendance of around 50, which would actually have been perfectly suited to the Friends Corner discussion space. The campus administration’s reticence to allow the event—and its general fear of Ferguson-related discussion—has to do with the nature of the protest movement in Ferguson. The protestors on the streets of Ferguson are directly confronting authority in its form of an extremely militarized police force. School administrations in this society are naturally fearful of a discussion in which one side righteously challenges the authority of the capitalist state apparatus, for if that authority can be called into question, the thought process goes, so, too, can their own. This caused the local high school in the SIUE area, Edwardsville High School, to place an outright ban on any discussion of events in Ferguson. The Edwardsville educational establishment seems to be of the opinion that if they ignore something, maybe it will just go away.

As for the event at SIUE, proceedings opened with an introduction to the event by David May of the St. Louis branch of the Workers International League (WIL). David explained what the WIL is, and noted the importance of the meeting’s subject, before introducing the night’s speaker, Brad Roderick, from the campus YFIS club.

After initially laying out the sequence of events in Ferguson, for those perhaps unfamiliar, Brad movingly described the experience of a friend of his who died at the hands of the police in Texas, pointing out that in some areas of St. Louis, people actually bond over friends of theirs who have been killed by police. He described his own participation in the Ferguson protests and what he saw: that is, the peaceful nature of the protests, and how at every turn, from day one onward, violence was instigated by the police.

Brad discussed a number of other important points raised by the Ferguson events, for example, systemic racism and the treatment of young black men in our society; the militarization of the police; how this is the “War on Terror” brought home; and a brief historical overview of the state and class society.

He ended on a theme framed by a quote from Malcolm X, which began, “You’re living in a time of extremism, a time of revolution, a time when there has got to be a change.” The question Brad posed was, “Does it have to be this way?” We live in a society that has the productive capacity to feed the world many times over, and yet many go to sleep hungry, a society where a young black man can be shot on the streets for (granting the state every possible lenience, accepting every portion of their version of events) for the theft of a box of cigarillos. What that says about this society lays bare the real role of the state in capitalist society. It says that the protection of the private property of a box of items for sale on the market outweighs the life of a young man. To paraphrase Brad’s closing point, this is in itself extreme. The proposal of struggling for a better world, a socialist world, seems by comparison a rather moderate proposal.

Brad’s speech was well received by the crowd of around 50. The audience discussion raised a number of interesting points. Several commenters shared their concerns about the media’s presentation of the events in Ferguson. Fox News was called out by name nationally, but most of the focus was placed on local media. One participant expressed her concerns that one of the two hip-hop stations in the St. Louis area simply refuses to mention any news about Ferguson at all. Another expressed their displeasure with the tone of some right-wing callers on local talk shows who have come to accuse the protesters of seeking a “lynching” of police officer Darren Wilson—clearly racially charged language.

Another commenter piggybacked on one of Brad’s points as she discussed the militarization of the police in terms of the vast waste of public resources involved. In his sum-up, Brad would point out that the kinds of money used to fund the creation of small local armies across the country could better be used providing free tuition to students like those in the audience, a point that was very well received.

In his closing comments, Brad and YFIS took the opportunity to invite those in attendance to the National March in Ferguson at “Ground Zero” (the torched QuikTrip on Canfield Drive and West Florissant Avenue) at 10 a.m. on Saturday, August 30.  On the whole, the event was a success for the SIUE YFIS club, hopefully the first of many such events this semester.