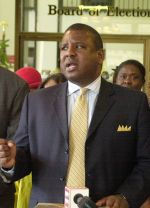 After a six month city election struggle, the campaign to elect independent labor candidate Elston McCowan as Mayor of St. Louis, MO has ended. Francis Slay, the Democratic incumbent, won re-election on April 7th, with just 17 percent of registered voters participating in the election. A member and officer of SEIU local 2000, running on the Green Party ticket, McCowan received just 3.2 percent of the vote.  Nonetheless, his campaign was a step forward and a sign of things to come as the economic crisis exposes the Democrats’ inability to offer any fundamental alternative to unemployment, cuts in public services and education.

The campaign first formed in October 2008, amidst the news of the unraveling economy, and largely developed out of the Campaign to Recall Francis G. Slay. The recall campaign had come into being in response to Slay’s attacks on public education, city services and  the institutional racism in City Hall and in the police and fire departments. The campaign aimed to force Slay out of office by collecting the nearly 50,000 signatures needed to hold a recall referendum. Since first coming into office in 2001, Slay and his allies, along with the Democrat-controlled Board of Aldermen, have been systematically attempting to dismantle the St. Louis Public Schools (SLPS) system, first by enacting policies that resulted in the loss of accreditation, followed by piecemeal public school closings while opening new charter schools.

Slay’s removal of then-Fire Chief Sherman George in 2004, the city’s first Black fire chief, after George refused to use a test in the department proven to disadvantage Blacks compared to applicants of other races, was the “straw that broke the camel’s back” and ignited the recall campaign. At its height, the campaign held rallies by the hundreds and turned the annual Martin Luther King Jr. Day parade into a politicized march opposing Slay.

However, this movement was in part diffused when several influential church and “community leaders” tied to the Democratic party made an accommodation with Slay, holding a “victory rally” inside City Hall in November 2007. This sidelining of the recall movement was possible because these bishops, deacons and others do not oppose the Democratic Party itself, but instead were worried about the damage done to the party’s position due to Slay’s unpopularity. The accommodation with Slay was meant to reinforce Democratic rule and to divert discontent into safe channels, specifically toward opposition Democratic Party candidates who would challenge Slay in the Democratic Primary.

Similar to the situation in most U.S. towns and cities, the Democratic Party has a virtual monopoly on city government, and this situation continues due to the labor leaders not providing a political alternative at the national level. The unions are the only mass organizations that belong to the working class in the United States, and are the only viable, mass basis on which a fundamental and class-independent political alternative to the Democrats and Republicans can be built. Instead of fighting for such an alternative, the labor leaders are often the main pillar supporting the Democrats, even though the interests of the union members run completely counter to the interests of Big Business and both bosses’ parties. However, the accumulating discontent with unemployment, the attacks on schools and city services, police murders of youth, racism, etc. continues to push through the cracks. More and more working people are seeing the need for an alternative to the Democrats and Republicans that represents their own class interests. The McCowan campaign was an initial expression of this process.

With the many of the Recall campaign’s forces diverted out of the campaign and far short of the needed number of signatures, the campaign decided to oppose Slay on the election ballot instead. The Green Party in St. Louis, which had supported the recall campaign, and which has local ballot status, put itself forward as the electoral vehicle for the campaign.

The Green Party’s last candidate for Mayor, community activist Willie Marshall, had won 20 percent of the vote in 2005. At a meeting held in September 2008, it was clear that separate viewpoints had emerged. One view, supported by WIL members active in the campaign, was prepared to stand an independent candidate, with no ties or allegiances to the Democratic Party machine, in order to unseat Slay. Another wing had illusions that it was possible to unseat Slay with a “one, two punch” by putting energies toward supporting a challenger to Slay in the Democratic primary, and only running an independent candidate as a “fail safe.”

The problem with this second viewpoint is that it is not possible to reform the Democratic party, or to somehow compete for influence in the party against the millions in Big Business “donations” that go into the party. In fact, none of Slay’s policies could have been carried out without the active support of the Democratic party itself! At this meeting, the campaign selected McCowan as a candidate who pledged to be “in it to win it.”

From the beginning, the campaign drew the most active core of the recall movement, including both active and retired SLPS teachers and AFT members, other union members, students, Black and white, young and old. While McCowan was the candidate of the Green Party, the campaign’s roots in the recall drew in new layers of people.

The campaign’s electoral platform represented a clear alternative to Slay and the Democratic Party, calling for, among other things: full employment, for quality education and a halt to all SLPS school closings, a moratorium on all foreclosures, evictions and utility disconnections, quality housing, universal health care, for the federal government to pay to bailout the nation’s beleaguered state and municipal budgets, and to fully fund our public schools and universities, health, public transportation, infrastructure and other services. Compared to this, the corporate candidates had very little to offer working people in the election.

Beginning in November, the campaign began in earnest with weekly meetings of McCowan supporters which discussed and planned the work of the campaign. The Green Party’s slate of Aldermanic candidates in the election included: Tim Kaminski, UAW 110 retired, for 7th Ward; Eugene Frison, retired city courts bailiff and activist, for 9th Ward; Ken Hollenbeck, retired Communication Workers of America 6300, 13th Ward. The campaign attempted to build links with area unions as well as the Central Labor Council, although the campaign was unable to gain any formal endorsements. Many in the campaign agreed that the only route to the necessary finances, and more importantly broad, mass political support from other working people was through the labor movement.

Campaign volunteers dedicated every Saturday, with many dedicating time every day of the week, to distribute campaign flyers and signs, hold impromptu rallies at busy intersections, canvass door to door, and donating time and effort to build a website and raise finances. The campaign correctly focused a lot of attention on connecting with the teachers, students, staff and parents of SLPS, with many interventions made at public meetings organized by SLPS to discuss school closings and other matters.

This had a definite impact, and even though the teachers’ and staff union, AFT 420, in the end endorsed a Democratic Party candidate, the campaign helped strengthen resistance to school closings and the SLPS finally began to implement use of funds to remove lead paint from schools, a key concrete demand raised by the campaign.

The local political establishment was clearly worried that McCowan could build on the Green Party’s 2005 result of 20 percent. On the evening of March 29th, the day before a three way candidates debate between McCowan, incumbent Democrat Slay and Democratic State Senator Maida Coleman, a van used by the campaign and parked in front of McCowan’s home was firebombed at 1 am. While it was not clear who carried out the arson, it seems clear it was meant as an act of intimidation on behalf of the Democratic Party establishment.

Despite the fact that the campaign had few resources, was for the most part denied media attention, and in the end the election itself saw a very low turnout, it was able to make an impact. The Post-Dispatch, the local daily paper, grudgingly had to admit that of all the candidates in the general election, only McCowan had a detailed program to create jobs.

We in the Workers International League endorsed this campaign and worked to build it because we are in favor of building a mass party of labor based on the unions, armed with a program of socialist demands that truly addresses the interests of the working class majority of American society. We believe that this campaign gave a lead at the local level in this direction, and it showed that it is possible to run independent labor candidates fighting against cuts and working to implement policies that can improve the lives of working people. But to truly take on the bosses’ parties, we need a truly mass party of labor and the vast numbers and resources the unions could mobilize for local and national campaigns.