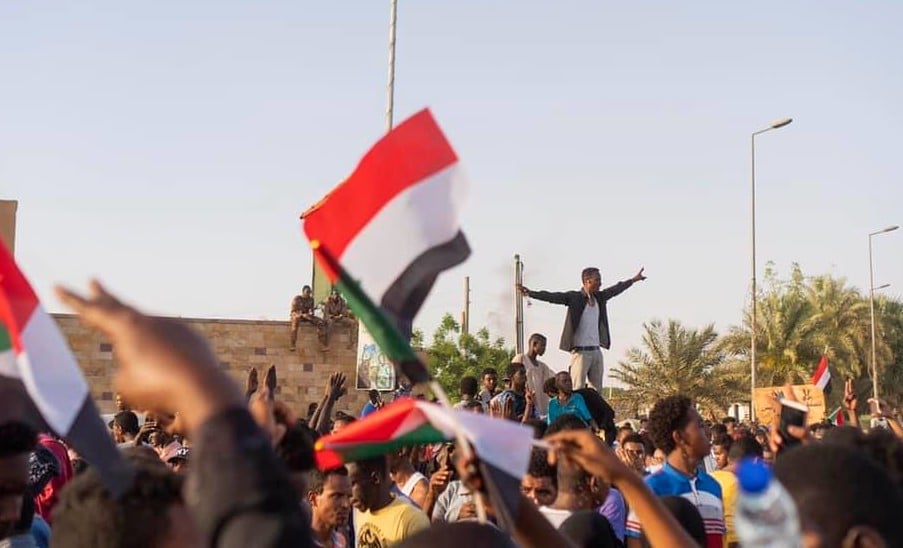 This article provides a summarized account of the revolutionary events unfolding in Sudan since April 2019. It is based on a series of articles on marxist.com, where you can find a more detailed analysis of the situation and further updates.

Three months have passed since the Sudanese masses rose up and overthrew the hated dictatorship of General Omar al-Bashir, a man who ruled Sudan with an iron fist for thirty years. Following months of escalating protests against cuts to basic subsidized necessities like bread and fuel, this marked an important victory for the Sudanese people, but it was only the first step in a revolutionary process.

Just as Bashir was being deposed, the military establishment formally took the reigns of state power, declaring a state of emergency and announcing “the formation of a Transitional Military Council (TMC) to manage the country’s rule for a period of two years.”

In other words, the same forces that were responsible for the brutal oppression of the Sudanese people for decades, and for the killing of dozens and wounding of hundreds of protesters in the preceding months, were now asking the masses to return home and accept their rule. In exchange for this, the military establishment promised “democracy” and “human rights”—after two years of having a free hand in a state of emergency!

Subsequent events in Sudan have been a battle of living forces between revolution and counterrevolution, between the power in the streets and the vicious repression of the TMC, which is attempting to consolidate its control of the country.

Events in Sudan have been a battle of living forces between revolution and counterrevolution, between the power in the streets and the vicious repression of the TMC / Image: Fair Use

All the classic elements of a revolutionary situation can be seen in Sudan: a deep underlying economic crisis; the masses losing their fear of the old regime and taking to the streets in such massive numbers that they topple the dictatorship; desperate maneuvering at the top. The generals at the head of the TMC are moving might and main to hold onto power—changing everything so that nothing changes—i.e., trying to appease the masses with cosmetic changes so as to restore order, in the hope they can survive the turmoil.

Their first move was to appoint Bashir’s former Vice-President, Ahmed Awad Ibn Auf, as interim head of state. However, the masses immediately saw through the deception and poured into the streets, defying the new curfew announced by the military, demanding that it step back and that Ibn Auf be removed. This pressure, and in particular the strong links of fraternity between the movement and the lower ranks of the army, forced the TMC to remove Ibn Auf within 24 hours of appointing him and to replace him with Lieutenant General Abdel Fattah al-Burhan.

Following this, the Declaration of Freedom and Change (DFC), the most organized expression of the movement, whose dominant section is the Sudanese Professionals Association (SPA), entered into negotiations with the TMC about the composition of the future regime.

The SPA has been the de facto leadership of the revolution since its inception. It won its position because of its role in the radical strikes of doctors and other professionals in 2018. This put it ahead of numerically stronger organizations such as the Communist Party, which has been dragging its feet with a weak and reformist program in the past period. The SPA, on the other hand, intervened immediately when the present movement sprang up in December 2018, giving its full support, and calling for the downfall of the regime and its replacement with a civilian government. It was its radical approach, calling for a complete break with the previous regime, that won it the leadership of the movement. Its position was further cemented at every stage as it directed, organized, and continuously called for the escalation of action: from radical street protests to full-blown general strikes.

However, beyond guiding different forms of protest, the SPA has shown limited a perspective for how to move forward. Its petty-bourgeois composition and outlook has led it to vacillate and prevaricate at decisive moments of the revolution, with tragic results, as we shall see. As an example, following the removal of Bashir in April, the SPA leaders merely called for negotiations with the TMC, which is composed almost exclusively of Bashir-era military leaders and other warlords connected to the old regime.

During the greater part of the last few months, the real power has been in the streets and in the factories—in the hands of the workers and poor peasants—who have proven to be all-powerful once they begin to move. We have seen all the hallmarks of the creative ingenuity that characterizes the newly awakened working class in action: strike committees in every workplace; spontaneously organized general assemblies making declarations of solidarity and electing its spokespeople; security checkpoints to prevent armed infiltrators from passing through barricades; and self-organization of all the necessary functions of society, including teams of volunteers to keep the streets clean, distribute food, and organize transportation, as well as volunteer doctors dispensing medicine and care to those in need.

During the greater part of the last few months, the real power has been in the streets and in the factories—in the hands of the workers and poor peasants—who have proven to be all-powerful once they begin to move. / Image: SPA

These actions are proof that the workers of Sudan are far better equipped to organize and administer the functions of society than the capitalists or their representatives in the military—which has been reduced to an empty shell each time the masses have taken the initiative in the streets.

At the end of May, the revolution reached a new stage as the SPA suspended negotiations with the military and called for a two-day general strike. This was the first properly organized political general strike for years, and it brought the country to a complete halt. Strike participation in the capital city of Khartoum was virtually 100%, and all transportation, mines, industry, hospitals, highways, distribution, utilities, etc. were brought under the control of the workers. The massive scale of the strike clearly posed the question of power.

Throughout the country it was clear that a dual power situation had developed, with the state and the SPA competing for control. In fact, not only did the workers in every industry look to the SPA for leadership, even all the main ministries of the government followed the SPA lead during the strikes. The working class and poor had risen up, showing that it was more than capable of bringing down the regime and taking control of society. Then. after two days in which power was essentially in the hands of the SPA, it abruptly called off the movement saying that it would call for new “civil disobedience” at an undisclosed point of time in the future.

Rather than seize the moment to topple the military regime and disarm the counterrevolution, the SPA forfeited the offensive and prepared to resume negotiations with the TMC—thereby allowing the counterrevolution to regroup. The military generals, sensing their chance to strike back, launched a vicious campaign of repression at the beginning of June, using tens of thousands of reactionary militiamen brought in from rural areas to disband the revolutionary encampments and terrorize the people on the streets. Hundreds of protesters were killed, their bodies thrown into the Nile. This was the price paid by the masses for their leadership’s failure to pass onto the offensive when the timing was ripe.

However, the massacre did not mark the end of the revolution. The whip of the counterrevolution served only to stiffen the resolve of the masses while revealing internal divisions within the state. It is typical of revolutionary situations that one wing of the ruling class tends towards greater repression, as it fears that concessions will merely embolden the movement, while the other wing favors concessions, fearing that increased repression could backfire. As long as the revolution is on the rise, they are both right and both wrong at the same time.

Hundreds of protesters were killed at the beginning of June by reactionary militiamen brought in from rural areas. / Image: publik15 via Flickr

The military offensive in June gave rise to a new wave of mobilization which culminated in another general strike. Again, the SPA had an opportunity to go onto the offensive, especially given the impact of these events on the Sudanese Armed Forces (SAF), who were disgusted by the atrocities they witnessed being carried out against the Sudanese people by the reactionary militias. Many rank-and-file soldiers, and also some officers, openly declared that they were not represented by the TMC regime. There are even reports that SAF troops intervened in some instances to protect protesters from the militiamen.

If the revolution had organized a systematic campaign of agitation to appeal for solidarity among the ordinary soldiers, significant portions of the armed forces could have been won to the side of the masses. If the SPA leadership had issued a call for the army ranks to organize themselves into soldiers’ committees, linked up with workers’ committees on a national level, it would have allowed the revolution to swiftly and peacefully consolidate its position by taking over the key strategic infrastructure of the country. The reactionary militias could easily have been disarmed by the armed masses, backed by the rank-and-file soldiers, the vast majority of whom were sympathetic to the revolution and not the TMC.

However, the revolutionary leadership failed to make such an appeal, and instead called on the protests to remain “peaceful,” and calling off the general strike shortly after it was launched, as a gesture of “goodwill” and “willingness to negotiate” with the TMC.

At the end of June, the masses again took the initiative and mobilized in some of the largest demonstrations in Sudan’s history. Despite the media blackout and internet blockade imposed by the regime in early June, the masses were able to coordinate their actions through networks of “Neighborhood Resistance Councils” which have sprung up across the country.

Instead of leaning on these initiatives and giving them much-needed cohesion by extending them into a national framework for a workers’ government in Sudan, the SPA again turned its back on the masses and entered negotiations with the TMC.

This time, they came to an agreement to form a “sovereign council” which, in practice, consists of a TMC majority full of figures of the old regime. Furthermore, elections will not be organized until after three years—if they are organized at all. It is necessary to call things by their name. The SPA has joined a government with the butchers of the revolution. This rotten compromise is a complete betrayal of the revolutionary masses, who have shown their enormous potential and creativity again and again during the course of the revolution.

The Sudanese revolution is not yet over and there is time yet to complete it. In conditions of extreme hardship, the masses have built an impressive movement organized in committees throughout the country with potentially unstoppable power. These must be extended into the armed forces and linked up nationally to prepare for the inevitable future clashes with the counterrevolution. The masses can trust only their own power. No amount of negotiation or street protests can “convince” the generals and the rich to act in the interest of the majority. The only solution is for the revolution is to take power and remove these parasites from all strategic positions within the state apparatus, the armed forces and the economy.