Support the workers in their Struggle with Verizon! This Strike can be won! 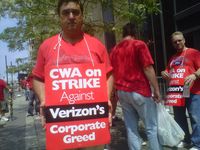 Print out copies of the new CMPL leaflet on the Verizon workers’ struggle for distribution on the picket line.

On Sunday, August 7, 2011, 45,000 Verizon workers organized by Communication Workers of America (CWA) and the International Brotherhood of Electrical Workers (IBEW) went on strike after Verizon management refused to back down on its demands that the company’s workers accept cuts. In justifying these cuts, Verizon spokesman Lee Gierczynski cited the dwindling use of land lines: “We need to reach a contract that addresses economic realities, the wire-line business is constantly in decline. In order for Verizon to compete, Verizon and the unions need to make some difficult decisions.”

Although the old “land line business” has declined in the recent period, Verizon is making plenty of money with its new cable television service, and from the mostly non-union Verizon Wireless, which is “majority-owned” by Verizon. According to Verizon’s quarterly report from January, Verizon nearly doubled its profits over the preceding year. In April it was reported that the company’s profits more than tripled since offering service on the popular iPhone. According to the New York Times, Verizon had profits of $22 billion in the last four years and net income of $6.9 billion in just the first six months of this year. In fact, at least until the recent turmoil in the markets, Verizon stock has been outperforming the stock market as a whole.

One can now understand why Verizon management is seeking to get these cuts and concessions “they so desperately need” from their union workers: their shareholders demand even more profit at the workers’ expense! Verizon is demanding that pay increases be tied to job performance and that workers pay up to $3,000 per year in health care premiums, which would in fact amount to a direct cut in wages. Verizon wants to take back holidays such as Martin Luther King Day and Veterans’ Day.  As reported in the New York Times, Verizon management wants to end pensions for new hires and freeze pension payments for current workers. Management also wants cuts in sick time and would like to include provisions in the contract which would eliminate job security. This would allow them to fire older workers and higher a new “pension-free workforce.” The ability to more easily fire workers would eventually allow Verizon to destroy the unions altogether.

Communications workers were organized in big battles beginning in the 1930s against AT&T, also known as the Bell System or “Ma Bell,” the predecessor of Verizon. The Communications Act of 1934 set up AT&T as a government-regulated monopoly, and this monopoly tried to crush genuine organization by setting up company-controlled “unions.” After years of labor battles that swept across the U.S., the 1938 Wagner Act was passed, outlawing these company unions. The IBEW and what later became known as CWA battled their way to establish themselves and fought hard to gain higher wages, improved benefits and better working conditions for communications workers.

Verizon is one of the “Baby Bell” companies formed after the 1984 government-mandated break-up of AT&T’s monopoly. Since then, the unions have had to continually battle Verizon and the other Baby Bells to try to keep their hard-earned gains. The wages and benefits currently enjoyed by the unionized workers were not given to them by a benevolent management.

And while management demands cuts for the workers in these “hard times,” Verizon’s top five executives received a total compensation of $258 million in the last 4 years. That is an average of more than $12 million per executive per year! Times are clearly not tough for everyone!

In 2009, the CWA gave up health care benefits fully paid by the employer in its negotiations with AT&T, accepting that the workers would have to pay a portion out of pocket, and this give-back has encouraged the actions of Verizon. Despite massive profits and high-paid executives, Verizon is trying to drive down its labor costs. The logic of capitalism is that a lower-paid workforce means increased surplus value, i.e. higher profits, and when the unemployment rate is high, wages can be driven down even further. But in this case, the unionized workforce is an obstacle. The Verizon capitalists are determined to win this battle. It could be a very long strike but the union must be more determined than the employer and prove that without the labor of Verizon’s workers, Verizon is nothing.

Given the number of workers involved in this strike it is an important one for the U.S. labor movement. A victory for the Verizon workers would be a victory for the labor movement as a whole. It could serve as an example to the millions of other workers facing attacks like those faced by Verizon workers. However, a defeat would be a blow to the labor movement as a whole. This is a battle that must be won and can be won! In order to win this strike, the workers must see that their strength depends on the ability to spread this strike. The broader the struggle, and the more popular support they build for it, the more that bosses will lose their nerve to stand up to the union.

First, the CWA and IBEW should demand that the contract they are negotiating will cover the entire Verizon workforce, including any workers who join their unions now or in the future, and those who work for Verizon Wireless. Many of the picket signs carried by the workers read, “Every Verizon Job, A Union Job!” This is an excellent demand! But what is necessary to achieve this is a massive organizing campaign to recruit Verizon Wireless workers into the unions, getting them the same pension and health care benefits and wages. There is strength in numbers! The unionization of Verizon Wireless workers, standing side by side with their brothers and sisters on the picket lines, would leave Verizon executives no other option but to back down.

Second, the CWA and IBEW must mobilize their members at AT&T and the other telecommunication companies to support this strike. These workers must help Verizon workers win and then demand the same wages, benefits and working conditions from their own bosses. Verizon is sending managers out to the field to do repairs and install telephones and cable TV service. Other communications workers can help in organizing mobile pickets to deter these people from performing scab labor. Again, the spreading of the struggle can be the decisive turning point in winning this battle.

Finally, the two unions must ask public sector unions for help to augment their picket lines and rallies. In fact, New Jersey’s CWA is primarily made up of public sector workers. Mass picketing and large rallies would increase the confidence of the workers in this battle, and would also serve to draw in more layers of the working class in support of the struggle. Verizon workers have strong allies among their public sector brothers and sisters who are also under attack. Big business politicians claim: “Why should public workers have pensions when private sector workers no longer have this?”  It is very much in the interest of the public sector union workers to support this battle and make sure it is won.

The same political parties attacking public sector workers and making cuts in social programs have passed many anti-labor laws, such as Taft-Hartley, which make it illegal for workers to use tactics that can allow them to win a strike, such as solidarity strikes. Historically, unions have been victorious when they mobilize their members to do what is necessary in order to win the most important battles, regardless of the laws and the courts. In fact, when unions were first formed in the 1800s, they were considered illegal. It took years of struggle and a willingness to disregard oppressive laws to establish the unions’ right to exist. The history of the American labor movement is full of examples of struggles to overcome obstacles put in place by the two parties of big business, the Republicans and the Democrats.

Ultimately, the only way to repeal these laws will be when labor sets up its own mass party and battles the two political parties owned and controlled by the bosses. Such a party could play an instrumental role in similar struggles in the future.

Solidarity and victory to the Verizon workers!