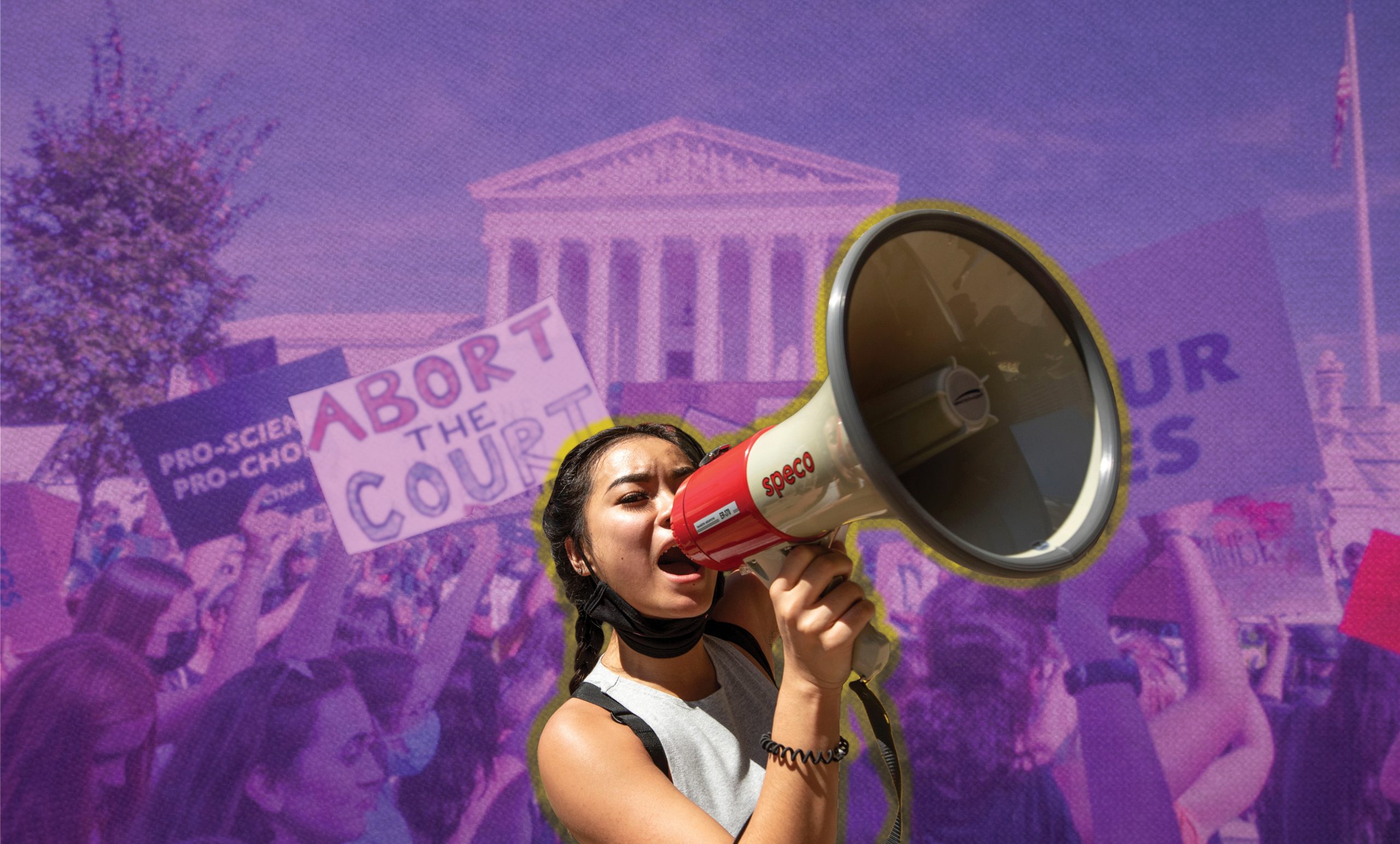 Editorial for issue 33 of Socialist Revolution magazine. Subscribe now to get your copy! Download the PDF of the four-page foldable leaflet here.


A leaked internal memo drafted by Supreme Court Justice Samuel Alito has rocked the already polarized world of American politics and class struggle. In it, the majority of that reactionary body outlines its case for the judicial overturn of Roe v. Wade, the historic 1973 decision that ruled that the US Constitution protects a pregnant woman’s liberty to choose to have an abortion without excessive government restriction. As part of the cynical maneuvering by a segment of the ruling class to divert the class war into the so-called “culture war,” what should be a fundamental democratic right is to be unceremoniously trashed.

Alito’s argument is simple. Since the question of abortion is not explicitly enumerated as a federal power in the Constitution, it is a states’ rights issue. Roe v. Wade is, therefore, “egregious,” “exceptionally weak,” and above all, unconstitutional, regardless of the Justices’ personal views for or against abortion. And to add insult to injury, in a footnote to his memo, Alito cited a decline in the “domestic supply of infants” for adoption as a reason to overturn Roe. So much for legal precedent!

The fact that such a closely guarded opinion was leaked by persons unknown is a graphic expression of the deep divisions at the cupola of society, as the ruling class tears itself apart, frantically trying to square the circle of their system’s inherent contradictions. This is a sign of weakness, not strength, by the defenders of the capitalist status quo. But it doesn’t change the fact that virtually overnight, tens of millions living in a majority of US states may be thrust into the barbarism of an earlier century.

For anyone with a uterus, abortion is an indispensable part of reproductive healthcare. Roughly one in four American women will have an abortion by the time they are 45 years old. While cases of rape, incest, problems with fetal health, and relationship problems are among the reasons given by women seeking to abort a pregnancy, the overwhelming reason is economic—millions of people simply can’t afford the expense and time it takes to nurture a child properly.

With the cost of living more expensive than it’s been in 40 years and virtually no social support for childraising, poor and working-class families, and above all, mothers, must bear the rising costs and strain of raising a child. On average, it costs nearly a quarter of a million dollars to raise an American child. As a specific example, take baby formula. It is so expensive that it is kept under lock and key in many supermarkets along with cigarettes and alcohol to prevent desperate mothers from shoplifting. Add to that the dangerous levels of arsenic, lead, cadmium, mercury, and other toxins, regularly found in mass-market baby formula. And even if you can afford baby formula and can trust it is safe, you may not be able to find any. As we go to press, 40% of baby formula is out of supply due to the absurd inefficiencies of an irrational market. And when you consider that 10 million American children live in poverty—with 2.5 million homeless—you have a damning condemnation of capitalism.

Little wonder millions feel they have no choice but to abort. Strikingly, half of all people who get an abortion in the US live below the poverty line. Without federal protection of this fundamental right, those who choose to have the procedure will be forced to rely on unsafe and unregulated providers, risking their lives, savings, and livelihoods to access the procedure. Of course, the wealthy can find a way to terminate a pregnancy, traveling out of state or country as needed to pay for high-quality private doctors. But for poor and working-class women and trans people, it’s another story altogether. To be sure, this is the grim reality faced by billions of women worldwide. But even in the wealthiest country on earth, the entropic forces of capitalist decay and reaction threaten to drag society into a dark age—with some states even considering a ban on contraception.

So while this is a particularly egregious attack against working-class women, this is part of a broader assault on basic democratic rights and an attack on all workers and oppressed people. After all, if the right to abortion is no longer deemed constitutional since it is not explicitly mentioned in the Constitution, what about recently won rights like same-sex marriage or certain protections for LGBTQ people? Not even the most basic right, the right to vote, is guaranteed, as millions are legally disenfranchised, gerrymandered, or otherwise thrust into political irrelevance. Absolutely nothing is guaranteed to the working-class majority if we leave our fate in the hands of the enemy class. It is time to draw some hard lessons and to get back to the basic premise of the labor movement—an injury to one is an injury to all!

Despite their posturing on the question of women’s rights, the Democrats have played a pernicious role in allowing the rolling back of abortion rights and access over the last few decades. For example, in 1973, Biden said he did not believe that “a woman has the sole right to say what should happen to her body.” And in 1977, he used his political weight to block federal funding of abortions, specifically in cases of rape and incest. During their election campaigns, both Obama and Biden promised that they would sign the right to abortion into law—but failed to deliver even when Democrats had complete control of the House, the Senate, and the White House. Now, with Roe on the chopping block, the Democrats continued their impotent political theater with a doomed vote on a law to guarantee abortion rights nationwide. Majority Leader Chuck Schumer cynically acknowledged that the real aim of the charade was to mobilize Democratic voters in November’s midterm elections.

After decades of “playing by the rules,” it should be crystal clear that the game was rigged from the start. That Roe is even in danger of being overturned should blow apart any illusions in the Supreme Court, the Constitution, the Democrats, and the entire structure of American bourgeois democracy. These are the institutions of an exploiting and oppressing class whose interests are diametrically opposed to the workers’. This is the result of relying on bourgeois legality instead of class struggle. This is the fruit of “lesser evilism” and class collaboration. The answer isn’t to fight for “less” evil for the working class, but to put an end to all the evils of class society! The way forward is not through collaboration between the classes, but through class independence and the formation of a mass workers’ party.

The right to choose what one does to one’s body is a basic democratic right. In that sense, we defend Roe v. Wade. But such a right should not hinge on unelected justices, courts, and other officials or the subjective, changing interpretation of a document drafted over 200 years ago by wealthy, male, white property owners to accommodate a minority of slave owners. Furthermore, we want more than the “right” to an abortion. The “right” to drive 12 hours to the nearest abortion provider to pay for an expensive procedure after losing wages or even your job is not a real “right.” This is why the IMT fights not only for full reproductive rights up to and including abortion, but for universal access to such services if chosen, in safe conditions, in hospitals, free at the point of service as part of a national, socialized health care system.

For days after the leak was made public, protesters flooded streets across the country, in cities large and small. We can anticipate even larger mobilizations if and when Alito’s opinion is formally adopted. Mass protest is another fundamental right, and we must exercise it. To maximize its effect, the labor leaders should mobilize their members to support our class sisters who are under attack. But protesting is not enough.

Rights are ultimately only as good as the paper they are printed on unless they are backed up by force—in this case, by the mobilized working class engaged in mass civil disobedience and fighting for political and economic power. If they were really serious about defending their members and the rest of the working class, the labor leaders would call a general strike and put all their resources on the line to make it a reality. Unfortunately, this is not about to happen anytime soon. Nonetheless, it is the perspective the resurgent labor movement must fight for.

News of the Supreme Court’s majority position is a stark wake-up call for all workers. This is the “new normal” of life under capitalism—in reality, a return to the “old normal”—compounded by the convulsions of a terminally ill system that can temporarily counter its downward slide only by clawing back all gains won by past working-class struggle. So yes, we must protest, but above all, we should prepare for class struggle, class war, and socialist revolution. The road will not be easy, but there is no greater cause—and there is no alternative.