Tech Workers of the World, Unite! 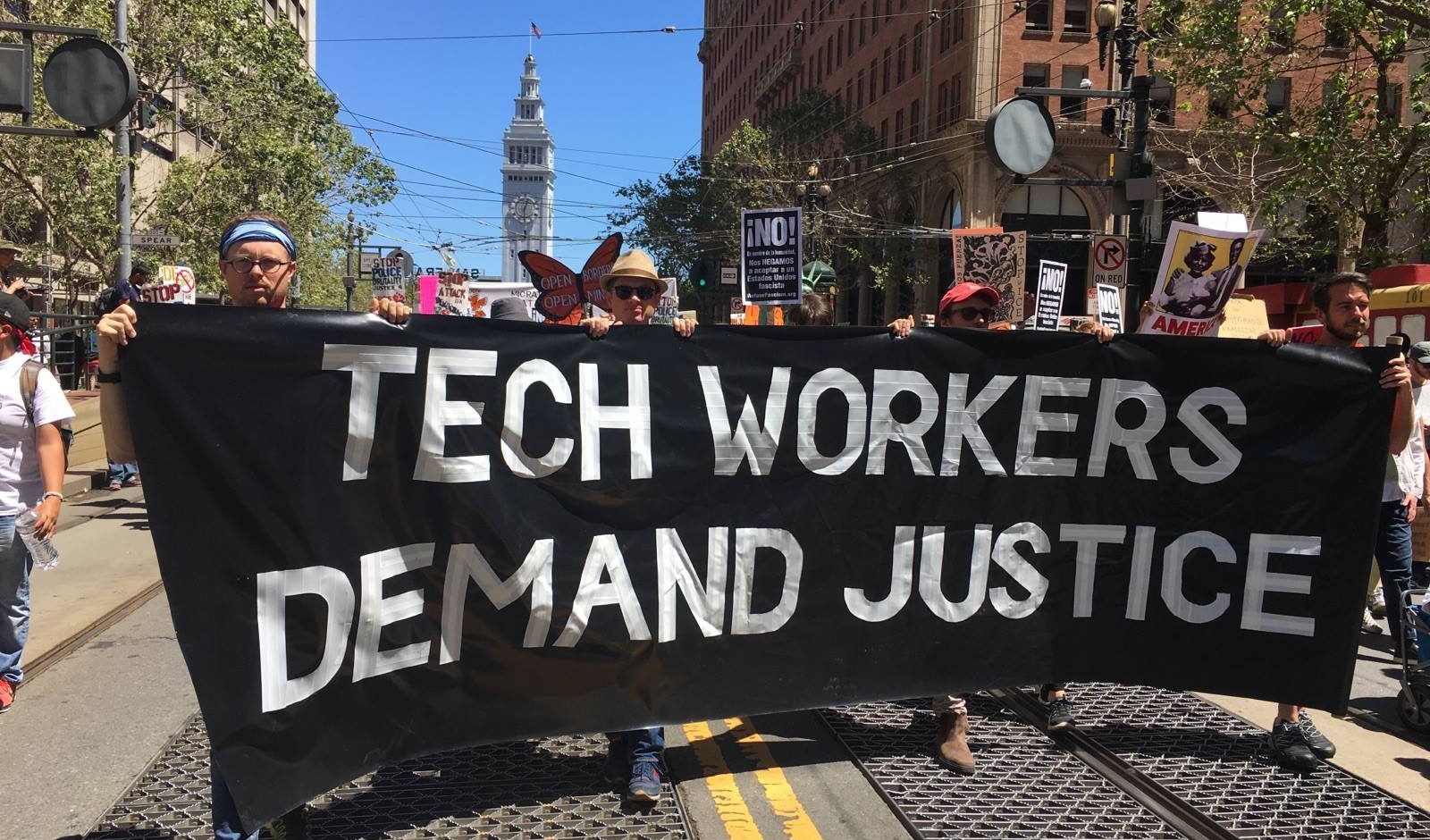 On November 2, Donald Trump’s Twitter account was taken down for eleven minutes. The account was deactivated by a German customer support contractor employed in Twitter’s “Trust and Safety” department. On this worker’s last day, an abuse report was submitted on Trump’s account, and he set the deactivation process in motion immediately before walking out of the building. The contractor only realized later on in the day that the process had actually been completed, thus silencing Trump’s account. Worldwide buzz ensued. This action by a single worker points to the enormous potential of a militant workers’ movement within the tech industry.

The Verge reported that “The lack of protections around accounts for so-called Very Important Tweeters was a known issue inside the company . . . Of particular concern is that many of the customer support staff with high-level privileges are third-party contractors located in the Philippines and Singapore.” This case demonstrates a significant weakness of the new tech platforms—a dependence on workers whose cooperation is not secured by the same level of compensation as tech engineers in the United States.

Many lessons can be drawn from this, both from the fact that a single worker was able to take down the primary communications platform of the most powerful person on the planet and from the fact that this takedown was limited to eleven minutes. Tech workers objectively possess tremendous power to help change the world, but for this power to be employed effectively, it must be organized and linked to the broader class struggle in the US and internationally.

The problem of tech capital’s increasing dominance over our lives can only be solved through the overthrow of the capitalist system by the organized working class. A first step in this direction is to begin spreading revolutionary socialist ideas among this layer of workers.

The capitalists have no interest in draining the social network cesspool

Trump’s is merely the most high-profile of the untold number of racist troll accounts on Twitter and is one of the most distinguishing features of his presidency. With more than 41 million Twitter followers, Trump is able to direct harassment campaigns against his opponents. As an example, in December 2016, the president used the platform to attack a union official in Indianapolis, who was immediately targeted with anonymous threats. Today Trump regularly uses his Twitter account to threaten military action against countries such as North Korea, showing there is no limit to the dangers of this problem being left unchecked.

Trump’s base of right-wing internet trolls congregating on social media platforms has festered for some time but has taken on a more political quality in recent years. One significant milestone in this process was “Gamergate,” an online harassment campaign targeting women and trans people in the video game industry.

The tech industry is deeply entwined with finance capital, and the tech capitalists themselves are not fundamentally different from the other capitalists, as their burgeoning alliance with the Koch brothers to fight government regulation demonstrates. While social media firms will remove content at the behest of the US and Israeli governments, there is no indication that the capitalists will take any meaningful action to protect marginalized people on these platforms. In the meantime, as this issue went to press, the English language account of TeleSUR, a left-leaning news organization with more than 400,000 English language followers, had disappeared from Facebook. The fundamental solution to the problem can only be resolved through socialism.

The role of tech workers

Software development is a social process employing many different types of workers. Software engineers develop code, which is tested by quality assurance workers, and deployed by operations workers on servers maintained by system administrators. These projects are managed and supported by a cohort of project managers and analysts. New approaches are constantly developed for organizing technical labor, intended to produce more with the smallest possible staff. A new organizing principle called “DevOps” is gaining currency in the tech sector, which seeks to place greater operational responsibility in the hands of the software engineers who initially write the code. On some level, this may express a desire by the tech capitalists to concentrate operational responsibility in the hands of the most privileged workers in the industry.

Software workers at the highest levels receive comfortable wages and are often courted by potential employers with lucrative compensation packages in an attempt to secure the best technical talent. Despite this, even the most privileged workers have no real interests in common with the capitalists and can be discarded when it’s convenient. The Economist points out, “Few shareholders question expenses when firms are flying high, but the mood could change swiftly if the stock market plunged, or a company’s performance were to falter, as happened this year at Twitter and LinkedIn.”

Many tech workers are employed on a temporary contract basis, allowing companies to scale operations up or down more fluidly than with permanent workers. The somewhat higher wages earned by some contractors may not adequately balance the precarity they experience through a lack of traditional benefits and protections. This reflects a general pattern in the industry, where high wages obscure atomized working conditions that also serve to inhibit workers from collectively organizing to improve those conditions.

It’s comparatively quick and easy for firms to outsource technical work to other countries, or reach out to new pools of domestic labor to replace existing workforces. The US tech industry depends heavily on contract workers from other countries, in particular India, and these workers are among the largest group of recipients of H1B visas in the US. The practical implication of this for tech workers is that solidarity work must necessarily extend across national borders. This dramatically increases the difficulty of trade union work in the tech sector, while at the same time adding internationalist dimensions to any such work that does occur.

Without organized solidarity and struggle among tech workers, the actions taken by these firms will continue to be driven by the agendas of the capitalists who own them. This goes against the interests of many of the workers who will carry out these actions. If anything, it is curious that Donald Trump’s account, which must receive thousands of abuse complaints every day, took as long as it did to be deactivated, even temporarily.

While only a small number of tech workers end up becoming rich through stock options, this happens with enough regularity that many workers may be acquainted with one of them, encouraging many of the most well-compensated engineers in the workplace to feel some affinity with the capitalists. This reinforces the tendency for such workers to align ideologically with the interests of the rich and act as a mediating layer transmitting these ideas to less-privileged workers.

When workers, in a technology workplace or elsewhere, adopt philosophical positions contrary to their own interest, these positions do not simply appear out of thin air —they reflect the real interest of a particular class, namely the capitalists. Leon Trotsky wrote in 1940, commenting on a struggle within the American Socialist Workers Party, “The mistakes of the opposition on the other hand reflect the pressure of another and alien class. An ideological break with that class is the elementary condition for our future successes.” An ideological break is precisely what the individualist culture of the tech industry is designed to prevent, and socialists in the tech workforce must drive a political wedge between the workers and the bosses.

Solidarity and the need to unionize the tech sector

The lack of union activity in the tech sector is an objective fetter on the potential of these workers to act in their own interest, and in the interests of workers everywhere. Embryonic efforts are underway to unionize tech, both in the US and India. A 2011 article in The Atlantic estimated that “out of the approximate 3,000,000 tech workers in the United States, maybe 5,000 in total are union members.”

In India, in October 2017, the Forum for IT Employees (FITE), based in Tamil Nadu, became the first officially registered IT trade union in the country. The General Secretary of FITE, M. Sathiesh, described the need to develop solidarity among IT workers: “This is important because the IT industry has a very peculiar character, that is employees and their issues are individualized . . . This culture has been cultivated consciously over the years as the management does not want employee organizations to take shape.” The next month, a new IT trade union, Karnataka State IT/ITES Employees Union (KITU), was officially certified in Bengaluru, the largest tech hub in India. These new working class organizations still represent a minuscule proportion of IT workers in India, but they are a promising development in a country which in recent years has seen the largest general strikes in human history.

The maintenance of social networks, e-commerce supply chains, and “sharing economy” apps depend on vast numbers of “traditional” workers. For one example, Amazon’s e-commerce network employs well-paid tech workers, as well as warehouse workers and drivers working in miserable conditions, as well as the manufacturing workers who create the goods in the first place. Smartphone manufacturers depend on rare earth minerals mined under horrific conditions. Much of the work of ensuring that social media feeds are not overwhelmed by violent content is carried out by workers in the Philippines who are subject to intense psychological trauma.

Many of these workers have already, through their experience, developed higher levels of class consciousness than their colleagues working in Silicon Valley tech offices. On Black Friday 2017, workers at Amazon distribution centers in Italy and Germany launched their first-ever strikes, after the company failed to offer bonuses. But eventually, even many of the higher-paid workers will be affected by capitalism’s relentless grind and irrational quest for profits. In short, there are many chokepoints in the industry where the working class can exert pressure and cause a chain reaction of lost profits for the capitalists and increased unity and class consciousness for the workers.

A future of struggle

The takedown of Trump’s account was the work of one worker, relatively low paid, but with access to a tremendous amount of power. It’s difficult to imagine an individual worker fifty years ago with the power to silence the most powerful person on earth. However, while this is an interesting proof of concept, individualist sabotage is not the way forward. Any individual taking such an action in isolation can simply be replaced or imprisoned. History has not yet seen the first mass workers’ strike against the basic functioning of the internet, but the potential for such strike action is enormous. Imagine what would be possible if hundreds of thousands of tech workers withheld their labor in coordination with millions of workers in other sectors.

The capitalists cannot be trusted to oversee the continued development and use of technology. In the final analysis, only by placing the infrastructure of the internet and its related industries under public ownership and democratic workers’ control can we ensure it will be run for the benefit of humanity as a whole.

The best way for tech workers in the rich countries to stand in solidarity with oppressed and exploited workers everywhere is to organize their own workplaces and to meet strike action by workers internationally with solidarity strikes against the technical infrastructure they service. A socialist future in which the vile interests of the rich are no longer given a platform in the pursuit and defense of profits is possible and necessary. It remains for the united working class to win this future for everyone, and tech workers have a key role to play in this struggle.