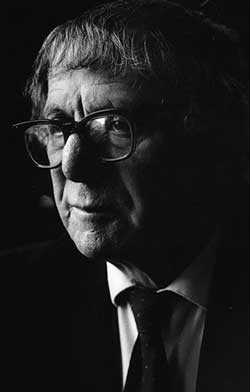 Ted Grant was born Isaac Blank in July 1913 in Germiston, South Africa, near Johannesburg. He died near London, England in July 2006. We present here a brief biography of his life and work.  We invite our readers to learn more about his ideas by reading them in full. Ted Grant’s Selected Works are now available from Wellred USA.

At a young age, he was introduced to the ideas of Marxism by a family friend, Ralph Lee. In the late 20s, after having read Trotsky and other material by the International Left Opposition (ILO) in copies of the American newspaper The Militant, Grant, Lee and others organized the Workers International League, which played a key role in the re-establishment of the Johannesburg Laundry Workers Union.

In 1934, Grant and another comrade, Sid Frost, departed for the “wider horizons” of Britain – the heart of world capitalism and imperialism. The rest, as they say, was history.

En route to Britain they stopped in France and met with Leon Sedov, Trotsky’s son and a leading member of the International Communist League (which succeeded the ILO and was laying the foundations for the Fourth International). In Britain, Grant joined the Labour League of Youth, the Labour Party’s youth section at the time, and participated in the day-to-day struggles against Oswald Mosley’s proto-fascist “blackshirts”, including the famous Battle of Cable Street.

In 1938, after Ralph Lee’s arrival in Britain, they formed the Workers International League, which experienced tremendous growth and development throughout World War II. By 1944, the WIL had absorbed the remnants of the Revolutionary Socialist League, a smaller Trotskyist group, and formed the Revolutionary Communist Party which, built on the WIL’s previous work.

However, the objective situation after the war—an unprecedented and prolonged capitalist boom and the relatively stable balance of power between U.S. imperialism and Russian Stalinism—combined with the bureaucratic maneuvers of the leadership of the Fourth International, cut across the growth and success of the RCP and the organization disintegrated. Nonetheless, throughout the 1950s Grant continued to defend and put forward Marxist views in a variety of journals and magazines. By 1964, a new publication, Militant, began publication, under Grant’s political direction.

Militant developed into the most successful Marxist tendency in the Labour Party’s history, and one of the largest Trotskyist organizations in history. Starting in 1964 with less than 50 comrades scattered throughout Britain, the Militant Tendency grew to more than 8,000 members, with 3 members of the British parliament, a number of city councilors and decisive control over the Liverpool city council (1983–87) by the mid-80s. They also held considerable influence within the Labour Party Young Socialists and played a leading role in the anti-poll tax movement which contributed to the fall of the Thatcher government.

The Militant Tendency was the largest section of the Committee for a Workers International, formed in 1974, which had sections in many countries. In 1991-92, the CWI broke apart on the basis of a split within the British section. The majority of the leadership of Militant wanted to abandon the orientation to the Labour Party and set up a separate organization, beginning with the “Scottish Turn” in Scotland. Ted Grant, along with Alan Woods, Rob Sewell and others were expelled, forming the Socialist Appeal group to continue the work. Internationally there were a handful of sections that went with the Grant group, and these were subsequently organized into the Committee for a Marxist International, later becoming the International Marxist Tendency (IMT).

In addition to remaining firm on the basic principles of Marxism in the face of overwhelming social and political pressure, Ted Grant made several important theoretical contributions to Marxist theory in the postwar period. In his analysis of the USSR, Eastern Europe, China and other deformed workers states, he built on Leon Trotsky’s writings on “soviet Bonapartism,” with his development of the concept of “proletarian Bonapartism.” His economic analysis of the difficult and complex postwar period is second to none. And perhaps most importantly, his continued development of the approach of Marxists to the mass organizations of the working class, laid the foundations for the successful development of the IMT around the world.