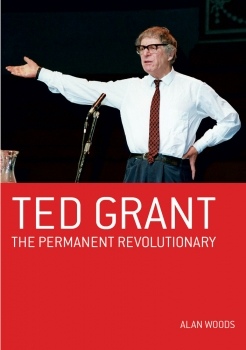 Ted Grant, born Isaac Blank, was an important figure in the international Marxist movement, who made a significant impact on British politics. When he died, all the main dailies carried extensive obituaries, in recognition of this fact.

This remarkable political biography by Alan Woods comprehensively covers the main events in Ted’s life and the development of his ideas, from his early family background in Johannesburg, right up to his death in London in 2006, at the age of 93.

From his earliest youth in South Africa, Ted Grant dedicated his life to the struggle for the emancipation of the working class. Just a decade after moving to Britain in 1934 to seek broader horizons, he became the leading theoretician of the Trotskyist movement, picking up where Trotsky left off after being struck down by a Stalinist assassin.

In his latest book, Alan Woods deals with the early days of the Fourth International and Ted’s battle to defend the ideas of Trotsky, which brought him into conflict with the leaders of the International after the Second World War. He illuminates the burning theoretical questions and debates of this period, and outlines Ted’s important theoretical contribution to Marxism.

Ted was the founder and theoretical inspirer of the Militant Tendency, which journalist Michael Crick once described as the “fifth largest political party in Britain.” The book traces the rise and fall of Militant and provides fascinating insights into a subject that to this day remains a closed book to most political analysts.

This is the truly amazing story of a truly amazing man, told with style, colour and wit. After reading it, you will feel that you have known Ted Grant all your life, and will have a much deeper understanding of many key aspects of Marxist theory and practice. The author, Alan Woods, has written many books on Marxism, was influential in the political evolution of Hugo Chávez, and is the editor of the widely-read website Marxist.com. He is a leading figure in the British Socialist Appeal and the International Marxist Tendency.

Pre-order here for $20 or purchased at the solidarity price of $25 to donate an extra $5 to help the IMT hire a new full-timer to expand the work of the Ted Grant publications project, currently producing Ted’s collected works.