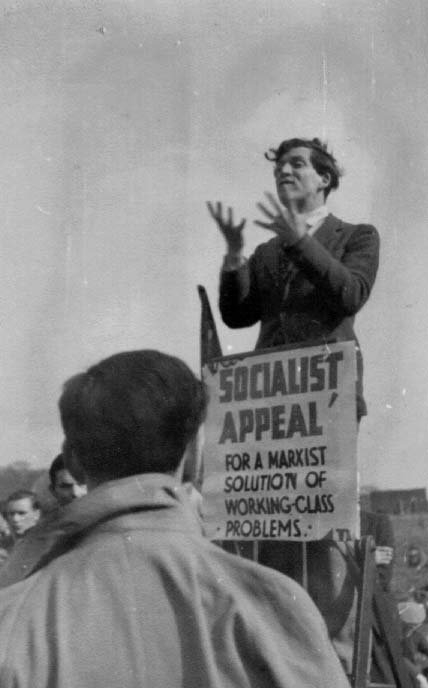 100 years ago, this year, Isaac Blank, better known as Ted Grant, was born in Germiston, South Africa. His work and writings represent an “Unbroken Thread” going back to Trotsky and the International Left Opposition’s struggle against the rise of Stalinism. Throughout this year we will be commemorating Ted’s contributions to Marxist theory and practice. As a part of this, Wellred will be publishing a new book on his life and ideas, written by Alan Woods, which will soon be available at www.MarxistBooks.com.

We reproduce here an excerpt from “Preparing for Power,” written in 1942, at the height of World War II, in anticipation of the radicalization and revolutionary wave that followed the war. In the end, capitalism lived to see another day, due to the mistakes and betrayals of the leaders of the Communist and Socialist Parties. But capitalism’s contradictions have not been resolved, and the struggle for socialism remains as urgent and necessary as ever. This document was written on behalf of the original Workers International League, the then–British section of the Fourth International (before its subsequent ignominious degeneration). Though written many decades ago, the words of this early work by Ted are as insightful and inspiring today as when they were first written.

The possibility exists for an unprecedented growth in influence and numbers in the shortest possible time. Today the problem consists mainly in preparing the basis for a rapid increase in growth and influence. The Workers International League will grow with the growth of the left wing. It is necessary to break sharply and consciously, as the group is already doing, with the psychology and perspectives of the past. The most difficult period is in the past—isolated membership and the hostility or indifference of the masses. Big movements and big events which we can influence are on the order of the day. The group must not be caught unawares by the development of events.

It is necessary that the organization face up critically to the most vital of all factors: the leadership and the organization are lagging behind the development of events. Objectively, conditions are developing and have already developed, which make for the speediest and most favorable growth and entrenchment of our organization. But the basic weakness lies in the lack of trained cadres. The membership is for the most part young and untrained and lacks theoretical education. The organization, despite the leap in influence, still maintains for the most part the habits and attitude of mind of the past—that is, of propaganda circles rather than of branches for agitation among the masses. The difficulties and tasks of the past period of the group’s life are still reflected in its ideas and work. On the basis of the new perspective a sharp break must be made with the past.

It can be stated without exaggeration that the decisive question of whether the organization will be able to face up to events will be determined by whether the leadership and membership can base themselves thoroughly in the shortest space of time, on these perspectives and face up to implementing them in the day-to-day work of the organization. To develop deep and firm roots and to become known as a tendency and organization throughout the country, and above all, among the advanced workers in the factories is the basic task of the organization.

The disproportion in the situation in Britain lies in the lack of relationship between the ripeness of the objective situation and the immaturity and weakness of our organization. Prospects of a swift impulsion of the masses leading to a spectacular growth of the organization on the lines of the POUM in the Spanish revolution, are rooted in the situation. But only if we realize the scope of the tasks and possibilities which history has placed before us. We will rise to the situation only if in the interim, skeleton cadres are built throughout the country. These cadres would serve as the bones on which the body of a powerful organization could be built up from the new and fresh recruits who will come towards us as the crisis develops.

These tasks must be accomplished. Our untrained and untested organization, will, within a few years at most, be hurled into the turmoil of the revolution. The problem of the organization, the problem of building the party, goes hand-in-hand with the revolutionary mobilization of the masses. Every member must raise himself or herself to the understanding that the key to world history lies in our hands. The conquest of power is on the order of the day in Britain—but only if we find the road to the masses.

Revolutionary audacity can achieve everything. The organization must consciously pose itself and see itself as the decisive factor in the situation. There will be no lack of possibilities for transforming ourselves from a tiny sect into a mass organization on the wave of the revolution.”

We invite our readers to read the full text at http://tinyurl.com/d2bmd46