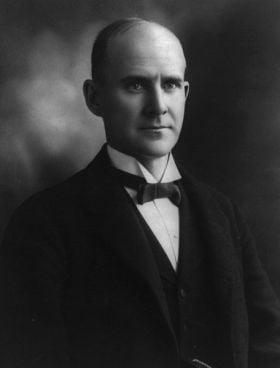 We republish here an article written by Eugene V. Debs in which he takes up the need for the US labor movement to form its own independent political party—a labor party. His perspectives for the formation of such a party—requiring the mobilization of the labor movement’s rank and file, the necessity for such a party to be based on labor, the need to avoid more “third party fiascoes,” and his clear differentiation between a reformist program and what he calls “the working class program for deliverance from industrial servitude”—were quite advanced in 1925 and are still highly relevant today.

The progressive tendencies in American politics are the outgrowth of the final stages of American capitalism and reflect the political awakening of the American working class.

These tendencies, despite all attempts through the blind stupidity of the workers and the covert machinations of their enemies to thwart or misdirect them, will inevitably lead to and result in the formation of an American Labor Party.

I do not know. I hope soon. But soon or late, it will come. That I know if I have learned anything at all about the operation of the resistless forces that are centralizing capital, socializing industry, organizing and arraying the workers against their exploiting masters, and compelling them more and more to take the initiative in the intensifying struggle growing out of their antagonistic economic interests, which can end only with their complete industrial emancipation.

This struggle is political as well as economic and will, because it must, be fought out accordingly, and this can only be done when labor has a political party as well as an economic union of its own to express its interests, declare its aims, and develop its power to fight its battles and achieve its victory.

This does not mean that a Labor Party shall consist exclusively of workers but it does mean that all who enter its ranks do so with the understanding that it is a Labor Party, not a middle-class party, not a reform party, nor a progressive party (of which the Republican and Democratic Parties are shining examples) but an open-and-above-board Labor Party, standing squarely on a labor platform, and marshalling its forces to fight labor’s political battles for its industrial freedom.

Most earnestly do I hope such a party will result from the Conference for Progressive Political Action to be held at Chicago beginning February 21st in pursuance of the agreement of the Conference to follow up the progressive [LaFollette/Wheeler] campaign with a permanent party organization.

To be frank I shall have to confess, not without reluctance, that I have not the faith I should like to have in a consummation so devoutly to be wished. But whatever the outcome I shall not be disappointed. I have long since gotten over that and learned how to wait.

We can have no effective Labor Party without the backing and support of the labor unions. That is a fact without question. The present leaders of the unions, strange as it certainly appears, are almost to a man opposed to a Labor Party. In this they are in entire accord with the capitalist masters and labor exploiters.

The hope for an American Labor Party lies not in the official labor leaders but in the rank and file, and until the latter are aroused, insist upon, and compel independent political action, no such a craft can be successfully launched upon the foul and stagnant waters of American politics.

If a bona fide Labor Party cannot be organized at Chicago, then I hope that no party at all will issue from that conference. Better for no party than a nondescript imitation of one, composed of so-called progressive and reform elements, more or less muddled, discordant, and wholly lacking in clear aim, definite object, and concerted purpose.

A “Third Party” of such a nature would at best align the dwindling “little interests” against the triumphant “big interests,” seek to patch up and prolong the present corrupt and collapsing capitalist system, and failing utterly to effect any material change or achieve any substantial benefit would finally fizzle out and add one more to the list of “third party” fiascoes.

A political party to succeed, for good or evil, must express, in the main, identical economic interests, without which there is no foundation to build or stand upon. A third party at this advanced stage of our industrial and social development, unless it stood expressly for labor, would be lacking such a foundation and consequently could not endure. Only a Labor Party can now be organized as a third party with any hope whatever of permanence and achieving its object.

A political party today must stand for labor and the freedom of labor, or it must stand for capital and the exploitation of labor. It cannot possibly stand for both any more than it could for both freedom and slavery.

I want to see the workers of this nation rise in the might of their intelligence and demand a party of their own, free, eternally free from the paralyzing putridities of the parties of their silkhatted, wealth-inflated, job-owning, and labor-exploiting masters—a party with a backbone and the courage to stand up without apology and proclaim itself a Labor Party, clean, confident of its own inherent powers, bearing proudly the union label in token of its fundamental conquering principle of industrial and political solidarity, and challenging the whole world of capitalism to contest the right of this nation to own its own industries, to control its own economic and social life, and the right of the toiling and producing masses to own their own jobs, to enjoy the fruits of their own labor, and to be the masters of their own lives.

I am suspicious of those who admit that we must have a Labor Party but object to having it called by its right name.

It should be a matter of pride and certainly not of shame to a Labor Party to have its true title nailed to its masthead.

If not, why not? Shall we fear to keep out many who would otherwise join? That is the very reason the party should be known for what it actually is as well as what it actually stands for. We must bear no false label, carry no false banner, nor seek support under any false pretense whatsoever. We must stand avowedly, face front, for labor—for the people who produce, who render needed service, and who are useful and necessary to the world. We need not designate both industrial labor and farm labor in naming our party. Both are labor, alike useful, productive, and necessary, subject to the same exploitation, and bound to be united in political solidarity in the same political party.

It is a fact as amazing as it is humiliating that the workers of the United States, the most advanced industrial nation on the globe, are practically the only ones who have no political party of their own, being content to give their support to the corrupt and enslaving parties of their masters, and meekly bowing their necks to the yoke of injunction rule.

Every other nation large and small with scarcely an exception has its labor party in full panoply fighting its battles for emancipation.

Even Mexico, so long reviled by our 100% morons as the land of “greasers” and peonage, has its militant labor movement to shame us into getting into line with the advancing columns of International Labor’s Grand Army of Emancipation.

Let me make it clear that I am not wanting another Socialist Party organized. We already have one and that is enough. Neither do I want another capitalist party organized, having already two, more than enough.

A middle-class party, by whatever name, would still be a capitalist party, for while it might champion “little interests” against “big interests,” with a sop to labor, it would still stand for the capitalist system and the perpetuation of wage-slavery.

If a genuine Labor Party is organized at Chicago I shall not expect the platform to go the limit of radical demands but shall be satisfied with a reasonable statement of labor’s rights and interests as well as its duties and responsibilities, doubting not that with the progress of the party its platform will in due time embrace every essential feature of the working class program for deliverance from industrial servitude.

The Socialist Party can, should, and I have no doubt will join such a party wholeheartedly, become an integral part of its structure, reserving, however, its autonomy unimpaired and using all its powers and functions in building up, equipping, promoting, and directing the general party.

To this end the Socialist Party must stand fearless and erect, inflexible and uncompromising for the working class upon the basis of the class struggle and wage the war against capitalism for the liberation of labor from its age-old bondage.

In the event of failure to organize a Labor Party with which we can consistently affiliate, I shall hope and strive for the continuance of the Conference for Progressive Political Action and its sessions and deliberations from time to time until it shall finally culminate, as it eventually must, in the AMERICAN LABOR PARTY.