The Camp Fire and the Disaster of Capitalism

On November 8, 2018, tens of thousands of people in Northern California’s Butte County joined the multitudes around the planet who have had their lives obliterated by accelerated climate change and the wanton negligence of the capitalist greed driving the phenomenon. California’s 2018 wildfire season was declared the deadliest and most destructive on record in what wildfire experts are describing as a “new normal” for the state. The small, formerly unknown town of Paradise has been effectively wiped off the map by the deadliest and most destructive fire in state history, now known as the “Camp Fire.”

The total number of people who lost their lives may never be known, but the count currently stands at nearly a hundred; the flames engulfed the town before many of its inhabitants received the alert to evacuate. Survivors have recounted the terrifying details of their escape from a fire that grew at a rate of a football field every second, spreading over dry tinder which had not seen rain in months. An urban firestorm raged on either side of the town’s main street as packed cars fled homes, their windows blackening, paint bubbling and peeling off in the heat. Residents had mere minutes to pack and decide what was most valuable to them before making for the single safe road out of town. More than 18,000 buildings were destroyed, most of them residential.

The town of Paradise has been effectively wiped off the map by the most destructive fire in California’s history—with nearly 100 deaths and 18,000 buildings destroyed. / Image: Public Domain

In the aftermath, thousands of newly minted climate refugees have nowhere to go. The town of Paradise has few services remaining to offer, its groundwater is contaminated, and cleanup is a process that will take not months but years. This has led to a quietly simmering humanitarian crisis. RVs, vans, and SUV’s line the back streets of Chico, the small mixed agricultural and college city where many survivors fled. Others have had to rough it in parking lots and makeshift tent cities, where norovirus and other maladies that thrive in squalor spread. Within a month, Wal-Mart and other stores that had put on a friendly face during the disaster grew tired of the victims’ presence on their doorstep and forced them to relocate.

Butte County is among the most impoverished areas in the state, and Paradise had nearly the lowest cost of living in the county. Over half of those living below the poverty line in the town were renters, and only a tiny handful had renter’s insurance. Among homeowners, the majority are from working-class families, and many were above the age of 50 and living on a fixed income. Now that their jobs are gone, the prospect of packing up and starting again is an insurmountable challenge for many. The state of California, already in the midst of a housing crisis, simply cannot absorb these refugees who could not afford to live anywhere else in the first place.

The city of Chico’s general lack of resources and long-standing contempt for the homeless has led to few measures being taken beyond patching together outdoor shelters. Those who can afford a hotel have filled every room in town, and rents, along with property prices, have exploded by 33% and continue to rise. Those suffering from PTSD and grief have few places to turn, while the conditions of daily life for a refugee, even one with relative means, leaves little opportunity to see to one’s physical health, let alone mental health counseling. Since the beginning of the New Year, news coverage has effectively ceased on these topics as no solution is in sight. 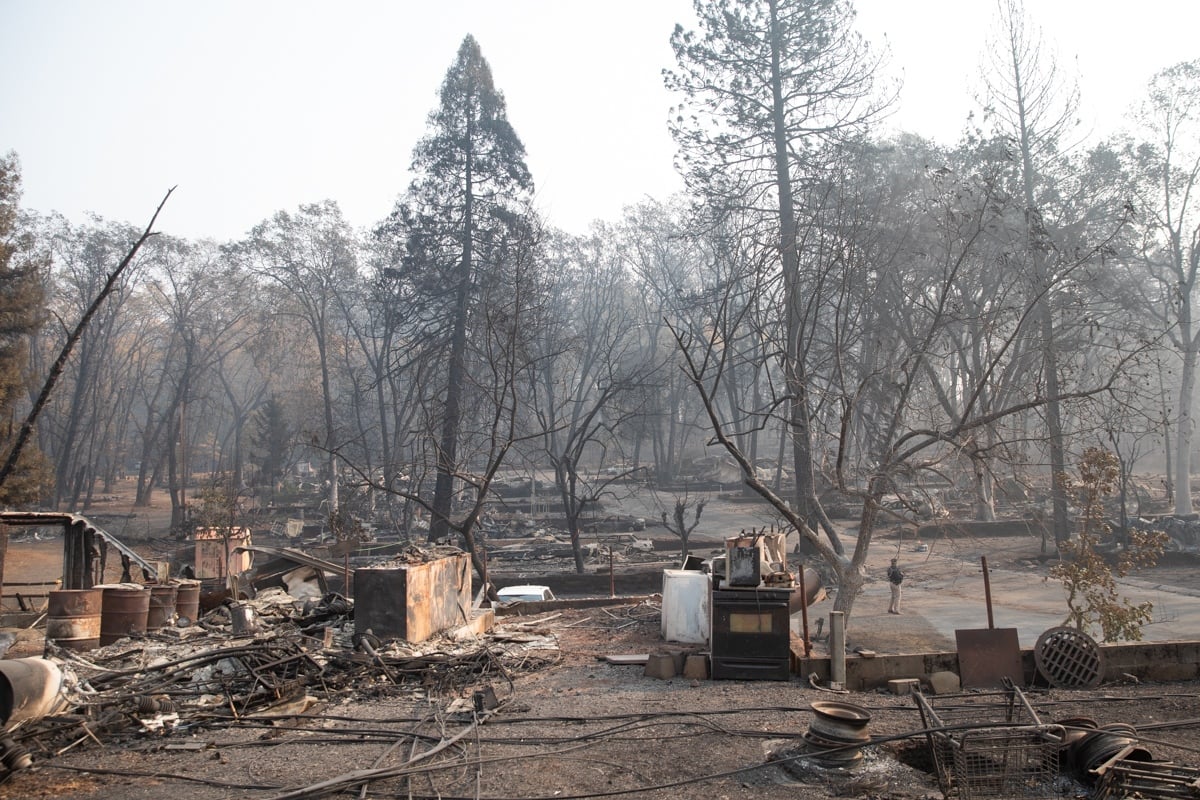 In the aftermath of the fire, thousands of refugees have nowhere to go. Already in the midst of a housing crisis, the state cannot absorb those who cannot afford to live anywhere else. / Image: Public Domain

The investigation into the cause of the fire points to Pacific Gas and Electric, the largest public utility in the US, which has a monopoly on the West Coast. PG&E, which has been sued for negligence many times in the past and which is already on probation after being found at fault in a deadly San Francisco gas explosion in 2010, was found to have been aware of the high risk of wildfire in the area, for which safety demands a temporary power shutdown. PG&E alerted customers that they might do this, but they never followed through. It has come to light that PG&E workers radioed one another about a downed power line just before the fire spread uncontrollably. Unsurprisingly, news outlets and the state government have been careful to frame the issue as a sensitive one, not wanting to “jump to conclusions” when finding fault for the disaster. One can be sure that PG&E’s influential lawyers and lobbying apparatus have been working overtime to contain the damage—to their profits.

In contrast to the fire survivors, PG&E has been assured shelter from the beginning. While its stocks have tumbled as investors foresee payouts and liability in the company’s future, PG&E has been allowed to prevaricate and dodge responsibility whenever possible. Most recently, the company announced that a rate hike would be used to pay for liability costs, making customers across the state foot the bill for the company’s negligence. Acting Governor Gavin Newsom, true to the nauseating, sycophantic norms of the Democratic Party, has expressed his “deepest condolences” and promises “justice” for the victims, all while coddling the company responsible for this disaster and maintaining that his office will “work collaboratively” with PG&E going forward. Gov. Newsom was quick to point out that PG&E’s Chief Executive, Geisha Williams, had resigned as a result of this fallout—as if the token resignation of an executive, along with her $2.5 million severance package, does anything to help the former residents of Paradise.

In times of crisis, the capitalist world teaches us what its real priorities are. Their message is loud and clear: other than well-wishing and charity that amounts to a drop in the bucket, there has been no substantial effort to permanently relocate or offer long-term assistance to those who have lost everything. Survivors have been forced to utilize a confusing patchwork of services—for which they may or may not qualify—to stay afloat, while those responsible take their millions and merely find new opportunities.

It is always the poorest and most vulnerable who pay the most dearly for climate change. / Image: Public Domain

Like Katrina, Puerto Rico, and so many other disasters have demonstrated, it is always the poorest and most vulnerable who pay the most dearly for climate change. When PG&E inevitably seeks to sell its infrastructure to ensure a healthy payout for its stakeholders, who will come to own this public utility which so many rely on? More of the same executives, capitalists who are not in the business of providing cheap, sustainable power safely and efficiently, but of making the maximum in profits.

A workers’ government would not think twice about establishing long term programs for refugee relief while quickly providing quality temporary housing and long-term relocation or rebuilding. A socialist party in power would mobilize the working class to take over the utility companies, to be publicly owned and operated under democratic workers’ control. Under the careful oversight and expertise of the workers, with the broader working class involved in its administration, society could ensure an energy infrastructure that is safe and efficient, while reducing its environmental impact year-after-year. However, as long as the capitalist system remains intact and unchallenged, the acceleration of climate change will continue to create deep, intergenerational trauma from which millions will never recover. To fight for a socialist future in which climate change can be managed and reversed, disaster abated, and where no human being is subject to the cruelty of being left out in the cold in a world of abundance, join the IMT today!