The Campus Crisis of Mental Health

In recent years, discussions about mental health have become commonplace. As this issue loses its stigma, it is increasingly pushed into the public discourse by objective factors such as America’s increasing number of suicides and the increase of major depressive episodes among youth. One recent international study found that as many as 35% of college freshmen struggle with a mental illness. My alma mater, Denison University, is a prime case for analyzing these factors, though by no means is this a problem that is unique to Denison. This school year alone there have been two suicides—in a student body of under 3,000—and an additional suicide occurred in 2015. After all three incidents, the students were devastated, and there were calls for people to check in on their friends. However, after the most recent tragedy, students began to question and challenge the institution’s ability to provide solutions.

After a period of mourning, many students took to social media to condemn the university for its lack of accessible resources such as mental health counseling, while others responded with abstract calls to be “kinder to each other” and to check in on friends and acquaintances more often. This was followed by the #EyesonDenison campaign, which emerged on campus and social media. While well-intentioned, the campaign notably fails to put forward any demands, positive or negative, aimed at solving or addressing the core issues that lead to depression and suicidal ideation. Many students understandably feel an urgency to take action, but in order to be effective, actions need to be discussed and thought through to their logical conclusion. In the absence of a materialist, class perspective of the broad factors that give rise to mental illness in students, the fight against this crisis is inevitably channelled into individualist avenues that address the symptoms but not the roots of the problem. 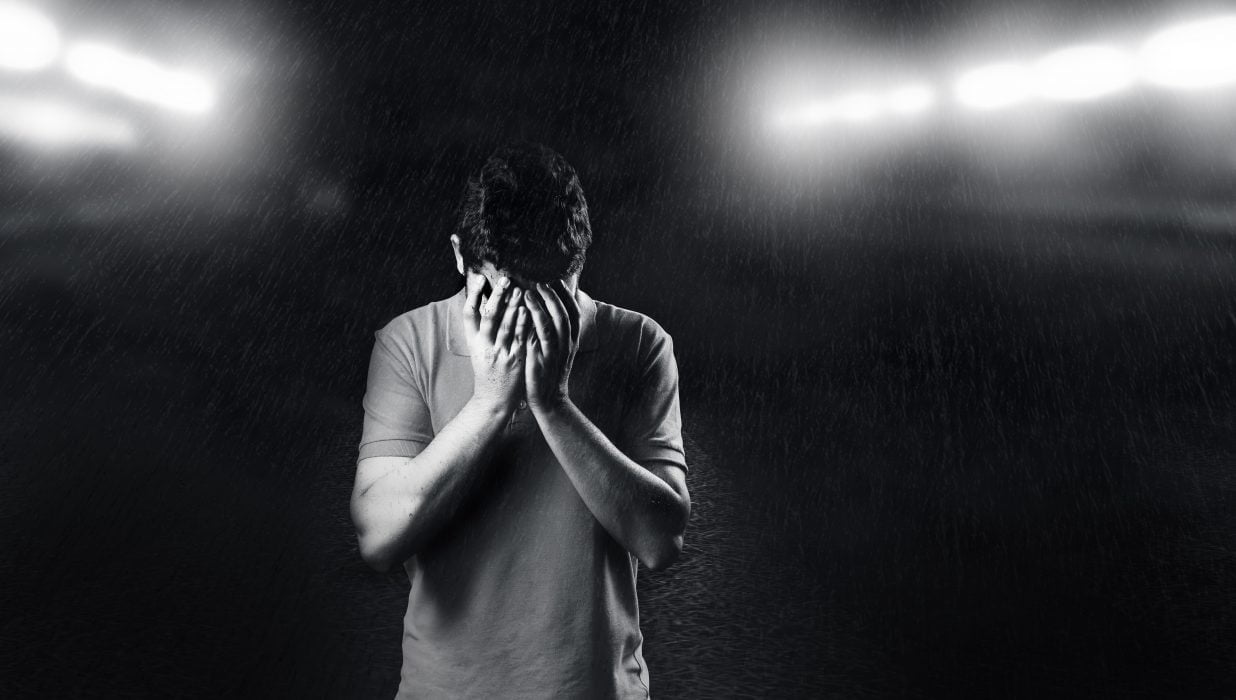 In the absence of a materialist, class perspective of the broad factors that give rise to mental illness in students, the fight against this crisis is inevitably channelled into individualist avenues that address the symptoms but not the roots of the problem. / Image: Fotorech via Wikimedia

While expanding access to counseling on campuses is an urgent need, this is still rooted in an individualistic approach to the problem, as the onus is placed on the individual student to seek out help in an unstable and alienating system. Therapy can be of great benefit for students who have access to this service and are willing to take the initiative to pursue it but unless we tackle the social problems facing the student body as a whole, it can never be more than a Band-Aid on a stab wound.

One of these social problems is the insurmountable burden of student loan debt, which reached a new record in 2019. Nearly 45 million people collectively owe $1.5 trillion in student loans. On average, a student who graduated in 2017 is carrying a debt burden of nearly $40,000. On top of this, 83% of students graduate without having a job lined up, and require an average of 7.4 months to find one. Figuring out how to eat and put a roof over one’s head while going through the exhausting and often humiliating process of job hunting during that period is up to the individual student.

Adding insult to injury, those graduates who do find employment are more often than not forced to take part-time jobs or low-skill positions that do not utilize their degree. As of January 2019, the number of underemployed graduates with a liberal arts or miscellaneous technology degree was 58.4%; for those with degrees in marketing the rate was 53%; for general business degrees: 56%; and for public policy degrees, 63%.

As long as students are burdened with insurmountable debt, bleak job prospects after graduation, the complete lack of a safety net or affordable healthcare and housing, and growing academic loads driven by competition for scarce high-paying jobs, the pressures that give rise to mental health illness will not be relieved. 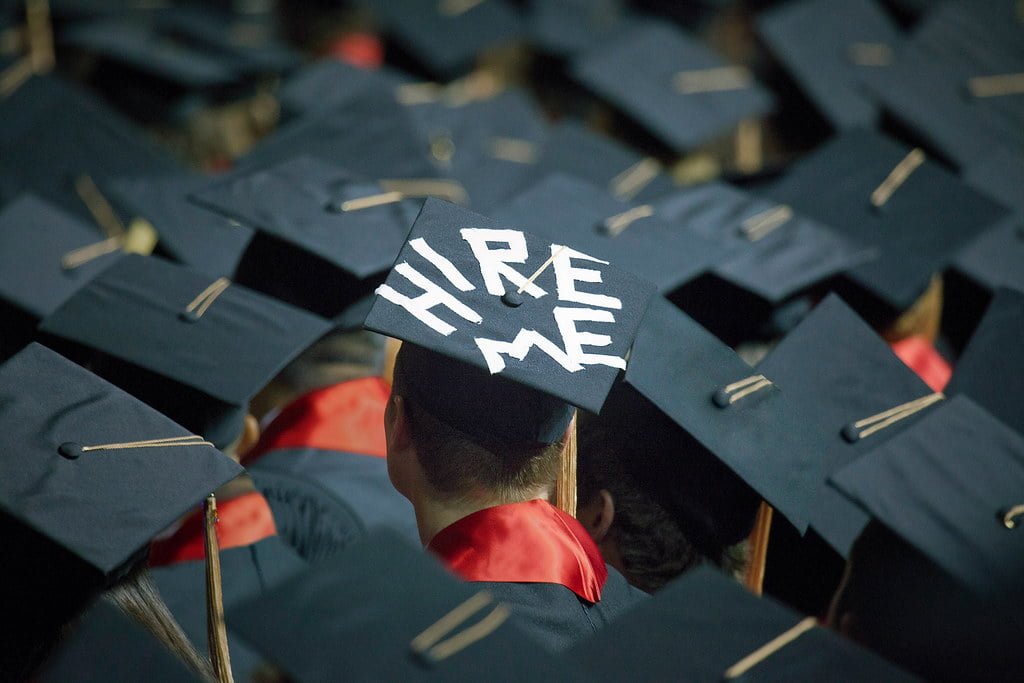 As long as students are burdened with insurmountable debt and bleak job prospects after graduation, the pressures that give rise to mental health illness will not be relieved. / Image: University of Denver via Flickr

These problems cannot be addressed by the policies of the university administration, whose core function within the “education market” is to solicit grants and donations, improve the university’s prestige, and get “higher quality” students to attend the school and enter the workforce. Functionally, this takes the form of Denison’s admission rate dropping from around 50% in 2014 to under 30% today—an additional source of stress on students. But this is just one aspect of the structural problems that flow from capitalist higher education.

The institution’s prestige and rankings by the College Board are not merely determined by the average GPA and ACT scores, but also by the perceived success of its graduates: higher employment rates and the income of recent graduates paint a school as elite. This leads universities to constantly pressure and overwork the students, as administrations place a heavy emphasis on achievements during college as a means of finding “quality” employment after graduation. Given the precarious job market for graduates, this is a natural response from a university organized in this manner—but it is also why such an administration cannot fundamentally improve the mental health of students. At its core, the role of a university’s administration runs contrary to the needs of its students.

Furthermore, these structures perpetuate the advantages already enjoyed by wealthier students. While many working-class students have to hold a job and meet additional GPA and behavioral criteria to continue attending university, wealthier students do not face these barriers. Both groups of students, in theory, are faced with academic stress, but the reality is that wealthier students are able to buy their way out of academic problems. While I attended Denison, there was a black market economy of older students selling their old papers and tests—and focus-enhancing drugs—to younger students with the means to pay and desire to take a shortcut. And of course, upon graduation, wealthier students are also more likely to have connections that will help them transition smoothly to the world of employment.

But it is not all depression and despair. The experience of an entire generation of students under capitalism is leading to widespread radicalization and the realization that we need a far-reaching revolutionary solution that can combat the isolation, alienation, and insecurity of life under this system. A revolutionary socialist program that breaks with capitalism offers the only real and lasting way to guarantee a rise in living standards as well as a thorough rethinking of the education system—as part of the transformation of society as a whole.

The problem of students facing a bleak and insecure job market while simultaneously being burdened with increasingly large debts must be met with demands for a guaranteed jobs program and the elimination of any costs associated with education at any level. All colleges, universities, post-secondary programs, and trade school programs must be available to all without cost. Along with the abolition of all tuition fees and the writing-off of existing student debt, we demand free student housing, books, and a living stipend for all students. And to ensure that all students have access to the highest possible education, all private universities and college systems must be nationalized and merged into a unified public higher education system.

The existence of private school systems premised on cost-based exclusivity are a key tool for the perpetuation of social inequality. Historically, the expansion of private schools was a way of maintaining segregation after the end of Jim Crow. To this day, private schools remain a highly segregated part of the US education system, particularly throughout the southern and western regions. In Mississippi, for example, white students make up 51% of the school-aged student body, but 87% of private-school students. Across the country, 43% of private schools are virtually all-white. Only through a single, unified, and fully funded system of public education can the racist, class-based educational gap be eliminated. 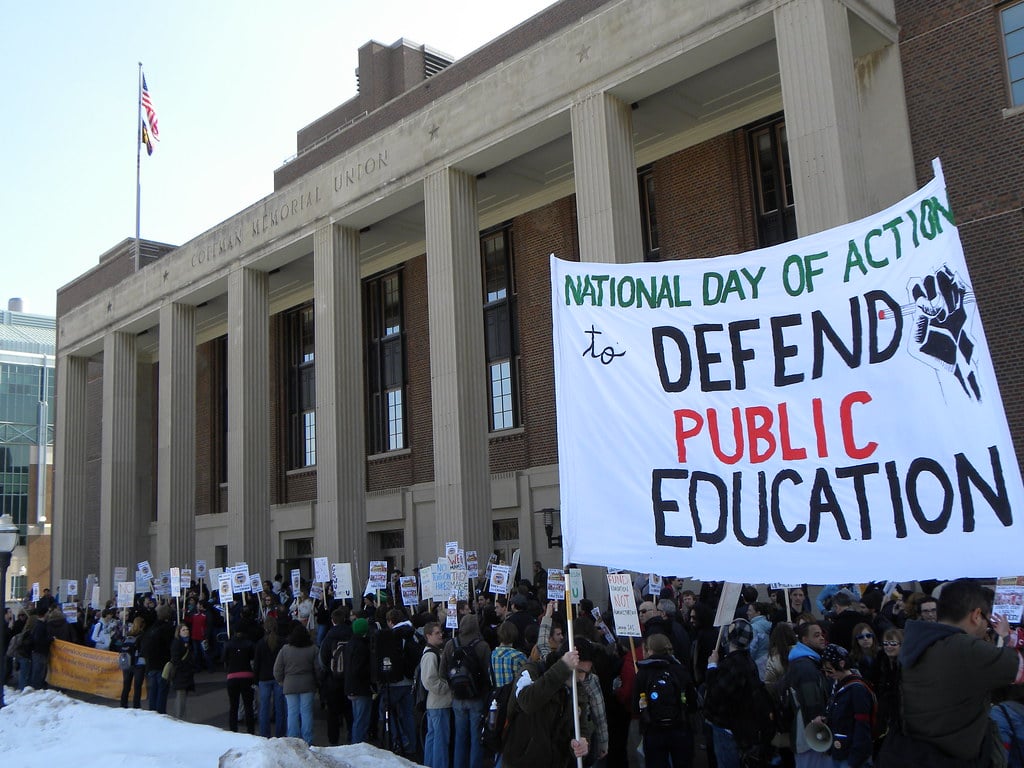 The existence of private school systems premised on cost-based exclusivity are a key tool for the perpetuation of social inequality. / Image: Fibonacci Blue via Flickr

In 2015, President Obama boasted that he had gotten corporations to “help expand high-quality science and technology education to more than 1.5 million students.” That corporations are investing in the reproduction of STEM majors speaks directly to the university’s role in the production of workers who can generate profits for employers. As long as it is constrained by capitalism, the university will remain an institution for producing skilled labor for the market, rather than a place for humans to pursue their real potential in various fields. As long as students are pushed into fields of study based on what is “marketable”—i.e., the fluctuating demands and whims of capital—universities will be epicenters of the alienation and pressures that come with capitalism.

The late evolutionary biologist Stephen Jay Gould once remarked that he was “somehow, less interested in the weight and convolutions of Einstein’s brain than in the near certainty that people of equal talent have lived and died in cotton fields and sweatshops.” By eliminating factors that exclude the poor from higher education, the mass of professionals in medical, scientific, cultural, and other fields would skyrocket—a part of eliminating poverty once and for all.

Whenever student struggles erupt, these must be broadened to include teachers and staff. As we saw in the recent wave of teachers’ strikes, faculty and staff at every level of the education system are affected by the same job precarity and share the interests of the graduating students in their struggle against an insecure job market. The growing strike wave is a small glimpse of what is to come, and it shows the way forward in the fight to transform education and cut across the crisis of mental health among youth.

As Marx wrote in The German Ideology:

In communist society, where nobody has one exclusive sphere of activity but each can become accomplished in any branch he wishes, society regulates the general production and thus makes it possible for me to do one thing today and another tomorrow, to hunt in the morning, fish in the afternoon, rear cattle in the evening, criticize after dinner, just as I have a mind, without ever becoming hunter, fisherman, herdsman or critic.

Socialism will offer access to lifelong, quality education for all. In a society with full and fulfilling employment, and essential services and programs that are neither understaffed or underfunded, advanced workplace training could be become an integral part of every job, fundamentally changing the way students relate to university and work life. In an economy that is democratically and rationally planned, not only will the material roots of the today’s mental health crisis be eliminated, but students will be able to use their time in university as a means of creative expression, to explore their interests and creativity unburdened by the threat of unemployment or homelessness.