The Case of the Jena Six 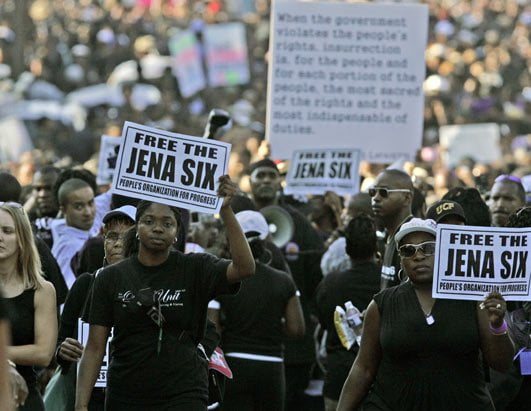 The case of the Jena Six has hit a nerve in the U.S. and internationally not because of the uniqueness of the injustices perpetuated against these young African-American men, but because these injustices fit an all to familiar pattern. From the social situation that existed at Jena’s High School with its echos of the Jim Crow era, to the flagrant racial double standard of Jena’s legal authorities, the case of the Jena Six has played out like a crystallized version of much that is intolerable for those who must deal both with the oppression of being working class and being black in the US. The mass reaction to the Jena Six’s case also demonstrates another truth about racism. Any system that divides working people inevitably produces an opposition and this opposition can potentially help to unite the working class against not only racism but its root source, capitalism, as well.

The tale of the Jena Six began to unfold when several black students decided to challenge a long time tradition by sitting under a tree at the school that had long been used by whites only. The students had been given permission by the school’s principal to do this. In response, several white students hung up nooses in the tree as a threatening reminder of how the Ku Klan Klan used to lynch blacks who didn’t “stay in their place”. Though expulsion had been recommended for the students responsible for this, they were instead given only a three day suspension by the school superintendent. The black students at Jena High responded with a spontaneous protest that led them to congregate beneath the “whites only” tree. This proved too much for the town’s authorities. District Attorney Reed Walters was marched before an assembly of Jena’s students by armed police later that day. He referred to the nooses as just an “innocent prank” and, in a comment directed at the black students, he menacingly continued: “I can end your lives with the stroke of a pen.” The school was put under lock down for the remainder of the week.

The message of DA Walters’ words, which in essence sanctioned racist intimidation against black students while condemning any attempt on the part of those students to oppose it, helped to contribute to a series of violent confrontations. A black student was beaten up at a white party. The students responsible for this beating received only a minor assault charge. This was followed by a confrontation in which a white student pulled a gun on several black students. After they wrestled the gun from him and called the police, it was the black students who were arrested for “stealing” his gun. Finally, after being taunted with racist insults, several black students beat up a white student. This time the authorities decided to act, although the student had not been seriously injured. They rounded up those who would later become known as the Jena Six. All six were immediately expelled from school. They were originally charged with attempted murder, though this was later reduced to attempted second-degree murder and conspiracy to commit murder. In order to make such charges, the prosecution claimed that the students’ tennis shoes constituted “deadly weapons”. In a local paper, DA Walters said of the Jena Six: “When you are convicted, I will seek the maximum penalty allowed by law.”

Five of the Jena Six were charged as adults even though one of them, Mychal Bell, was only 16 at the time of the incident. They were threatened with sentences ranging from 20 to 100 years and their bails ranged from $70,000 to $138,000. Theo Shaw and Robert Baily spent eight months in prison, where they were repeatedly maced for no reason, even though Shaw has asthma and had to be taken to the hospital after one prison guard attack. Mychal Bell was the first to be put on trial and was found guilty by an all-white jury. His public defender did not even bother to call a single witness in spite of the circumstances surrounding the case.

The treatment of the Jena Six in the courts is consistent with a long-standing practice of the U.S. legal system toward young working class black men: that is, lock them up and throw away the key. Such practices reinforce racial inequality. While blacks constitute just 13 percent of the U.S. population, they make up half of its prison population. A tenth of all black men between 20 and 35 years old are in jail or prison, with blacks being incarcerated at over eight times the rate of whites. One in three African Americans in their thirties have a prison record, as do nearly two-thirds of all black male high school dropouts. With such a record, which is even worse than in the times of Jim Crow, it is no surprise that Marcus Jones, father of Mychal Bell, said of his son’s incarceration that it was “one of the best lessons any son could learn. To know what it is to be black now.”

Because of how blacks are treated by the legal system, combined with growing political activity against racism and poverty in the wake of the Hurricane Katrina/New Orleans disaster, the case of the Jena Six began to get a mass hearing and the NAACP took up their defense. This culminated on September 20th, when Mychal Bell was to be sentenced. As many as 20,000 people flooded the streets of the small town of Jena, including members of the American Postal Workers’ Union, who endorsed and helped to build for the event. Simultaneous rallies were held across the nation, with 700 protesting in Philadelphia.

Under pressure, the Louisiana State 3rd Circuit Court of Appeal threw out Bell’s conviction on aggravated battery, saying he should never have been put on trial as an adult and released him on bail after ten months of incarceration. This important victory shows the effectiveness of mass organization and mobilization. However, within days of being released, in what is clearly an attempt at revenge, Bell was sentenced to 18 months in prison by a juvenile court for allegedly violating the terms of his parole on an earlier offense.

In addition to this, the reversal of Bell’s conviction as an adult will not affect four other teenagers also charged as adults because they were 17 years old at the time of the fight. Considering the injustices these defendants have endured and the flagrant racism of Jena’s DA and school superintendent, the movement that took to the streets on September 20th should continue organizing and mobilizing on a national scale until all of the charges against the Jena Six are dropped.

The magnificent Civil Rights Movement of the 1960s succeeded in ending segregation as the law of the land. However, a lack of quality job opportunities, unequal access to education and health care, deteriorating living conditions, and the criminalization of the youth is the norm for millions of blacks, especially if they are working class. The laws have been changed but the problems of racial inequality persist.

This is because racial oppression plays a strategic role for the U.S. ruling class. By systematically continuing the extra oppression of African Americans, the capitalists are able to make more profit off of black workers’ labor. They are also better able to exploit all workers by keeping our class divided, compelling us to compete with one another for scarce jobs and opportunities. Our greatest strength as a class lies in our united action against the system that exploits and oppresses us.

In order to forge this unity, it is the duty of all workers to oppose racism in all of its forms. Any mass struggle against racism inherently confronts the capitalist system and tends to lead the most class-conscious and resolute participants to the conclusion that a revolutionary solution is necessary. Racism can be most effectively combated by fighting for quality jobs, health care, education, and housing for all, as well as social programs that raise everyone’s standard of living, so that we all have the means and time to build a civilization worthy of the expression. Only under socialism, a system in which society and the economy are democratically controlled by the working class in the interests of all, will the material roots of racism be swept away. This will open up a new era of humanity in which all forms of oppression will become relegated to the dustbin of history.