The Circus of the White House Correspondents’ Dinner 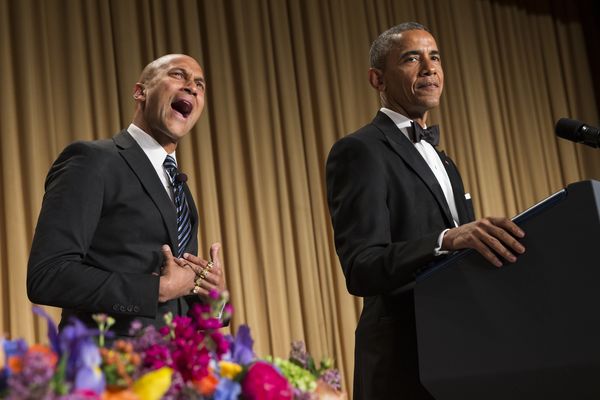 Every year, the White House holds its correspondents’ dinner. This farce, suitable only for those with iron stomachs and Herculean gag reflexes, is a clear demonstration of the major media’s “objectivity.” Even the New York Times was forced to deride it as “a crystallization of the press’s failures . . . [as it] illustrates how easily a propaganda-driven White House can enlist the Washington news media in its shows.”

Nevertheless, every few years, something happens at this gala that draws broader attention, as a “zinger” is landed by some “renegade”—even if the whole thing is sanctioned by the institution of the presidency. In 2006, it was Colbert Report host Stephen Colbert lambasting the Bush administration. In 2011, it was Saturday Night Live’s Seth Meyers skewering all-too-easy targets Donald Trump and Sarah Palin. This year, it was comedic mastermind Barack Obama, accompanied by his “anger translator.” This unorthodox move is yet another reflection of the ever-deepening contradictions in society.

Poll after poll indicates a growing distrust in the country’s institutions of government. The Brown, Garner, and Gray protests and unrest are manifestations of this reality. There is no question that some among the Democrats—that is to say, the “near-right” political wing of imperialist finance capital—understand precisely what is going on. There is unquestionably a layer of very handsomely paid members of the intelligentsia whose task is to monitor—using the most refined technology and analysis tools available—and advise the more farsighted bourgeoisie and its apparatus on the way forward. Needless to say, this is an increasingly thankless and difficult task.

In the United States, the working class does not have its own political expression. Because the trade unions are grafted on to the Democratic party in a kind of botched Frankensteinian horror surgery, the Democrats have historically played the role that the Social Democratic workers’ parties of Europe, betraying the working class’s honest illusions time and time again.

Summing up the role of Social Democracy, Fred Weston has pointed out that, “From a Marxist point of view, the role of the trade union bureaucracy is the policeman of the bourgeoisie inside the working class. They try and hold the workers back and maintain a certain stability for the bosses, but they can only do that if they have authority. If they’ve lost their authority, they cannot hold the workers back. Where you have the working class moving massively to the left and the bureaucracy still trying to hold onto the old position, either you will lose total control of the movement, or they have to step in and win back authority. They have to support the movement, and also raise some of its demands and appear to be leading. That is the only way to regain authority by which they will then try to pull the movement back to a moderate stance.”

Although the historical origins of these parties are different, there are nonetheless parallels here. Obama’s “anger” translator is nothing more than a cynical ploy to kick dust in the eyes of workers, for the President to pretend to really be “on their side.” How angry he is at those bad Republicans for thwarting his “liberal” agenda! Mr. Obama was even the first president to come close to publicly using the F-word. What a bad boy!

However, it would be a huge mistake to fall for this pitiful nonsense. The ruling class and its apparatus will employ the most scientific and well-placed rhetoric to fool, disorient, and confuse the workers. One needn’t look any further than Obama’s recent moves on the Trans Pacific Partnership and Venezuela for a confirmation of where things really stand. Of course, these are just some of the most recent examples of his doing capital’s bidding.

The working class in the United States has not begun to move on a mass scale. However, in Europe, events are erupting at an astounding clip. China is potentially on the verge of the greatest real estate meltdown in history. All of this will inevitably and eventually affect the US economy and society.

The more farsighted bourgeois are watching closely, treading lightly, and taking preemptive action to shift their rhetoric left to mirror and co-opt the anger of the masses. Unfortunately for them, they are fettered by the laws and contradictions of their system and regime. Events will force the masses onto the scene of history and the mavens of capital will have to do far more than hire well-paid comedy writers to put words in their representatives’ mouths.