The Class Roots of the Movement to Criminalize Abortion

Earlier this year, state legislatures passed some of the most draconian anti-choice laws in US history, in Alabama, Georgia, and elsewhere. The aim of most of these bills is to result in appeals before the US Supreme Court, allowing the high court overturn Roe v. Wade and open the door for states to further criminalize abortion.

Reactionary mass sentiment to criminalize abortion exists because a segment of the American ruling class needed it to consolidate its base of political support. Abortion as a “divide and rule” political issue was successful due to long-term intellectual work in developing religious concepts, initially forged in the racist regime of terror of the old South. The contours of the white evangelical tradition were engineered to attenuate the contradiction of having religious workers and farmers read biblical texts celebrating the liberation of slaves in ancient times while living in a society premised on chattel slavery and the subjugation of freedmen.

The anti-choice movement relies on the support of white evangelical Christians, who form a significant portion of the Republican electoral base, with 80% voting for Trump in 2016. White evangelical support for the Republicans is secured chiefly through abortion politics. However, despite the “traditionalist” pretensions of these fundamentalists, the religious basis for this group opposing abortion rights is very recent. The NPR history podcast “Throughline” recently produced an interesting interview on this subject. 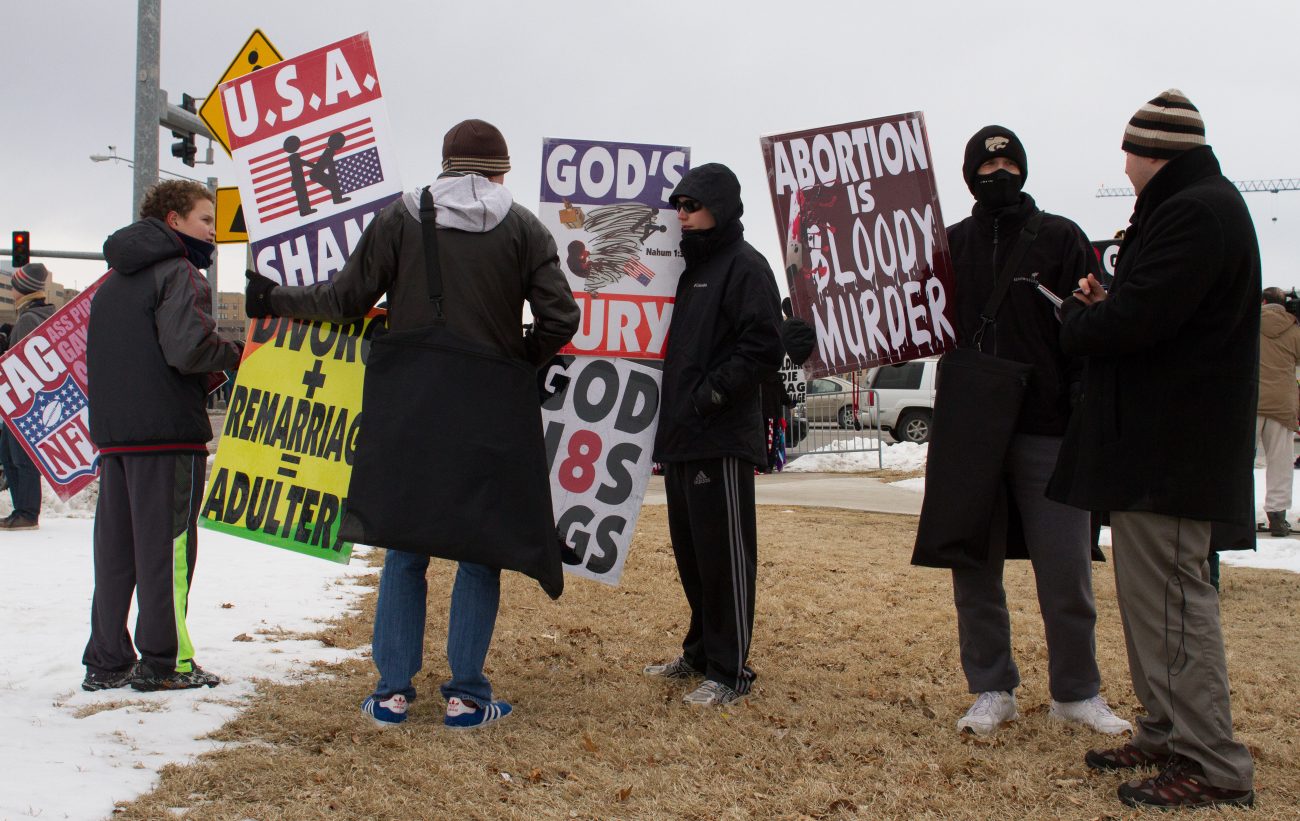 The anti-choice movement relies on the support of white evangelical Christians, who form a significant portion of the Republican electoral base, with 80% voting for Trump in 2016. / Image: Mark Schierbecker via Wikimedia

While the Catholic Church has a long history of attacking abortion rights, the evangelical focus on abortion politics doesn’t date back earlier than the 1970s and grew out of the shifting viability of openly racist slogans for organizing religious white voters politically. The common thread of white evangelicalism is not any distinctive theological commitment, but rather, a distinct political commitment to the former slaveocracy and its descendants. When one theological argument in support of this bloc failed, new ones were constructed.

The specifier “white” evangelicalism is significant in that it distinguishes it from other evangelical currents, particularly in black America, which often do not share the same reactionary politics. Fred Clark, who maintains the “Slacktivist” blog on the Patheos platform, has spent years unrolling the contradictions in this movement. He describes the core defining principles of the white evangelical movement today as a belief in “biblical inerrancy”—the idea that the Bible is without error or fault in all its teaching—and a commitment to criminalize abortion.

Biblical inerrancy is an undialectical way of viewing the world; a specific, brief passage of scripture is quoted out of context, and the plain meaning of the words is taken to be authoritative and applicable to any subject at all times. The broader themes present in the passage become irrelevant compared to any particular “clobber text” that can be wielded to “prove” a point—thereby “clobbering” their enemies into submission. The logic that determines the “plain meaning” of a text, and the range of subjects considered socially acceptable to “clobber,” are both guarded by religious gatekeepers, the translators and transmitters of ruling-class ideas into religious-sounding concepts. This is a classic example of the role of religion in class society.

Until the 1970s, evangelical groups, including the Southern Baptist Convention, which was founded in 1845 specifically in support of slavery, affirmed laws protecting legal abortion. Up to this point, the bloc that became known as the “Religious Right” had primarily organized around support for segregation. As this became less viable in the late 70s, new “clobber texts” were curated to maintain this political coalition.

The reactionary politics of this white southern bloc are not immutable aspects of the Christian faith but correspond to specific ideological tendencies nurtured over time. White evangelicals today are the inheritors of one of the camps in the 1800s bifurcation of American evangelicalism in response to slavery. Before they organized around anti-abortionism, this camp already had a century’s experience in defending the interests of the southern aristocrats.

This shift around abortion, and the related shift in white evangelical support from the Democrats to the Republicans, is tied to the disruption that accompanied the end of the postwar expansion. The crisis of world capitalism led to a realignment of the political forces that manage capitalism. Internationally, the oil crisis and the saturation of markets led to the emergence of an economy driven by the continued expansion of credit. In the US, the successes of the civil rights movement upset the balance of social forces knitting the two-party system together. Additionally, the atomization of family life in this period, with new suburbs, “white flight” subsidized by the state, and white migration to the so-called “Sunbelt,” facilitated the expansion of these individualist religious concepts out of the South and into new areas. This dynamic has been exacerbated and accelerated since the crisis of 2008, spreading with particular rapidity to hard-hit areas in rural America, as the labor leaders have failed to offer a class-based way out of the impasse.

The ongoing assault on abortion rights is the result of deliberate, long-term, ideological groundwork, combined with political organization and rallying slogans, all to advance the interests of a particular class: the capitalists. The majority of Americans do not support laws such as those passed in Alabama, but are not yet as well organized and single-minded as the handful of reactionaries that politically dominate the country. To fight back and win, workers must likewise lay the groundwork for a long-term political and economic struggle, harnessing our vast untapped power to advance the interests of the only progressive class on the planet: the working class.