The Crisis and the Minimum Wage 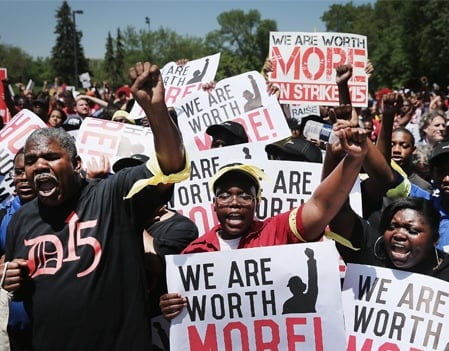 The “Great Recession” may have “technically” ended in June 2009, but what really matters are full employment and a steadily increasing quality of life. Capitalism’s inability to provide this is not due to individual malice or indifference— though there are plenty of sociopaths on Wall Street—but because under capitalism, creating jobs and paying workers are mere afterthoughts to the real reason for the system’s existence: profits. This is the inner contradiction and absurdity of a socio-economic form that can exist only through the exploitation of workers, and yet is unable exploit all the able, willing, and available workers, millions of whom must humiliate  themselves every day, offering themselves up for jobs (exploitation) that don’t exist.

Economist John Maynard Keynes is famous for advocating government deficit spending in order to save capitalism from workers’ revolution. According to his calculations in 1935, on the basis of a 15-hour workweek, all workers could have jobs, and the capitalists could maintain a healthy rate of profit by exploiting them. Of course, Marxists are against capitalist exploitation altogether. But the point here is the following: if a much lower workweek and decent standard of living for all was possible on the basis of the technology and productive capacity available eight decades ago, just imagine what would be possible today!

Millions of Americans are not only treading economic water but on the verge of drowning. One stark measure of this is the federal minimum wage. First set at 25 cents per hour in 1938, it crept up to $7.25 as of July 2009. Peaking in inflation-adjusted purchasing power at $8.67 in 1968, today’s minimum is more than a dollar lower in real terms than was 47 years ago and has lost over 8.1% due to inflation since 2009. According to the Center for Economic and Policy Research, if worker productivity were taken into account, the minimum should have been $21.72 an hour in 2012. An estimated 3.7 million workers earn $7.25 or less. 42% of all employed Americans earn $15 or less. To these must be added the 8 million officially unemployed and millions of others who are no longer even counted.

When we launched Socialist Appeal in the Fall of 2001, our program called for “a living wage for all—a national minimum wage of at least two-thirds of the average wage. No exceptions. For a sliding scale of wages tied to inflation.” A few years later, we decided to concretize this by demanding $16 per hour—roughly “two-thirds the average wage” at that time. But many years’ events have passed since then, and this demand deserved revisiting. After a thorough discussion, our national leadership has voted unanimously to change our demand to $25 per hour, tied to inflation through periodic cost of living adjustments.

This is still a long way from genuine socialism. However, we do not approach the demands in our program in isolation. Taken as a whole, they form an all-round transitional program to fundamentally change society. The aim of our program is to raise workers’ political horizons as to what would be possible if society were rationally organized and administered democratically by the workers themselves. The demand for a higher minimum wage and the many other “basic” reforms we put forward simply cannot be fully implemented and maintained within the profit system. When working out our demands we do not proceed from “what is possible” within the artificial limits of capitalism, but from the objective needs of the majority, the material wealth actually existing today, and the potential for multiplying that a thousand fold and more under socialism. To achieve all this we need strong unions and a labor party with a revolutionary socialist program. To fight for these we need organization, resources, and numbers. Humanity deserves more than the “minimum”! To do your part, join us today!