The Democratic Party and the Iraq War
Support Socialist Appeal – Subscribe or make a Donation!

The war in Iraq is the most important issue on the minds of American workers and youth. The ruling class is also increasingly concerned about the course of the war, which has now gone on longer than World War II. The seemingly endless stream of dead and wounded Americans and Iraqis, combined with the colossal costs – which mean deep cuts here at home – is having a profound effect on workers’ and young people’s consciousness.

There is an entire generation whose world-view has been entirely shaped by the epoch of war, revolution, and counter-revolution through which we are living. They live in a world where the perpetual “war on terror” – a war of invasion abroad and economic attacks against working people here at home – is the norm. It should therefore come as no surprise that symptoms of a profound questioning of the system are emerging everywhere.

This truly puts the ruling class between “Iraq and a hard place”.  A humiliating withdrawal would be a setback worse than their defeat in Vietnam, an end to their plans for further conquest and domination. But continuing this ill-conceived adventure can only exacerbate the contradictions rapidly accumulating here at home. They are therefore sharply divided over how to proceed, even within the Republican ranks.

There are those who wish to “stay the course”, blindly  following the path charted by Bush and his out-of-touch-with-reality neo-cons. Other, more far-sighted politicians like James Baker and the “old guard” of the U.S. ruling class, understand that this path is leading U.S. imperialism and capitalism straight over a cliff. Senator Chuck Hagel, a Nebraska  Republican and Vietnam War veteran, recently called the Iraq War “the most dangerous foreign policy blunder in this country since Vietnam.” This is not the “loony-left” saying this, but a serious contender for the Republican presidential nomination. This reflects the depths of the divisions at the very top of the U.S. government.

A new report from the Council on Foreign Relations think tank bluntly asserts that the situation in Iraq is beyond repair, that a U.S. military victory is impossible in Iraq, and that “amateurish” post-invasion planning has seen Iraq collapse into civil war. According to the report: “The United States has already achieved all that it is likely to achieve in Iraq … Staying in Iraq can only drive up the price of those gains in blood, treasure and strategic position … The time has come to acknowledge that the United States must fundamentally recast its commitment to Iraq. It must do so without any illusions that there are unexplored or magic fixes, whether diplomatic or military … The crisis has now moved beyond the capacity of Washington to control on its own … The United States lacks the military resources and the domestic and international political support to master the situation … It is now just a matter of time … Better to withdraw as a coherent and somewhat volitional act than withdraw later in hectic response to public opposition to the war in the United States … Some disasters are irretrievable.”

Clearly, the more intelligent representatives of the ruling class see the danger of burning out the military and want to cut their losses. They recommend an immediate timetable for withdrawal, and for a political compromise to be reached by negotiating with Iran and Syria. But instead of following this advice, which from the perspective of the ruling class is as intelligent as it gets in the face of such a fiasco, Bush is sending a “surge” of troops to Iraq and has appointed General David Petraeus, a counter-insurgency expert to lead the effort.

But this “surge” is really nothing of the sort.  The military is so over-extended that there are no fresh troops to send. In order to achieve the numbers required for this plan, the tours of duty of some troops are being extended, while the deployment of others is being accelerated.  But even this will not save the situation.  According to Petraeus’ own guidelines (he wrote the Army’s counter-insurgency handbook), an increase of 21,500 troops is a mere drop in the bucket. There are simply not enough troops to hold down a people that doesn’t want you there. Even the mightiest military machine in the world cannot afford to assign an armed guard to every Iraqi worker, peasant, or 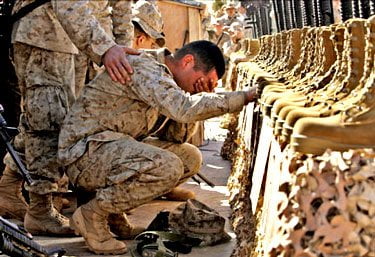 And what about the Democrats?  Although they approved the war in the first place and have stood idly by for years while Bush and co. looted the treasury and killed hundreds of thousands, they were swept into power last November on an anti-war and anti-Bush wave that assured them control of both houses of Congress.  For lack of a genuine working class political alternative, they benefited from this rejection of Bush and his policies. The war was the biggest issue, but health care, education, and the economy inn general also ranked high on the list of workers’ concerns. So what exactly have the Democrats done?

Instead of acting boldly and decisively in the interests of millions of working Americans by providing free, universal health care for all, they have simply “directed” the federal government to negotiate for cheaper Medicare prescription drugs. When it comes to education, instead of providing free, quality, education for all, they merely voted to cut the interest rate on federal education loans in half. And as far as the minimum wage, they have raised it a measly $2.10 over the next couple of years – nowhere near enough to make up for the stagnant wages of the past 30 years, and nowhere near a real living wage for all.

And when it comes to the war, instead of acting like a real opposition party and stopping the war in its tracks by cutting off all funding except that required to transport the troops back home, and opening an investigation into the lies, corruption and fraud, they spent days debating a non-binding resolution that merely gave Bush a symbolic slap on the wrist.

Some Democrats are now proposing a timetable for withdrawal – a classic case of “too little, too late” – 4 years too late to be precise. They are simply responding to the realities of the situation on the ground and cynically calculating their chances for 2008. In so doing, they treat the lives of thousands of U.S. soldiers and hundreds of thousands of Iraqis like chips in a poker game.  Most Democrats oppose the war not because it is an imperialist war of domination, but because it is hampering U.S. imperialism from more aggressively conducting the war in Afghanistan and the “war on terror” in general.

If they really reflect the interests of the majority, why didn’t they listen to us way back in 2003 when millions hit the streets in protest. Millions knew even before the war started that Iraq was no threat and that it had no connection with 9/11. How is it that these “professional” politicians, who now claim they were “duped” by Bush and his cronies into supporting the war, “had no idea”? The facts speak for themselves – most Democrats went along with the war from the beginning. It was a war not only for oil and strategic dominance, but to teach the poor peoples of the world a lesson in what happens if you “get out of line” – and in this they were in full agreement with the Bush administration. They objected only to the fact that the U.S. didn’t have more “allies” in pursuing it. In the final analysis, imperialist war is about money – and there is big money being made by the war profiteers of both parties.

This is not what millions of workers and young people voted for back in November. And let’s not forget the “bait and switch” that took place in the 2004 elections.  Many opponents of the war had sincere illusions in candidates like Dennis Kucinich and Howard Dean, who at least talked a good anti-war talk.  But what happened?  In the end they were roped into voting for “Anyone But Bush” – for John Kerry – a  pro-war candidate. How could it be otherwise?  Like the Republicans, the Democrats are entirely beholden to big business and will not bite the hand that feeds them.

Unfortunately, the current leadership of the anti-war movement remains divided and politically unfocused, while the labor movement has not placed itself at the head of the movement where it belongs.   What is needed is a bold lead, clearly linking the war in Iraq with the war on working people here at home. We need to organize in our workplaces, neighborhoods, and schools around a program and policy of militant class independence that can truly address the needs of working people and the youth.

The U.S. is the richest country in the world, and at least on paper we are going through an economic expansion.  And yet we see continual cuts in our standard of living, while the rich get ever-richer.

Enough is enough! Along with the demand of “Troops Out Now!” we must demand quality jobs, health care, education and housing for all.   To fight for this program, we cannot trust the representatives of either major political party to defend our interests. Both in Iraq and here at home, they serve only big business and the profit system of capitalism. What we need is our own political representation in the form of a mass party of labor.

On the basis of their own experience, tens of thousands of Americans are opening up to the ideas of Marxist internationalism and socialism – the only ideas that can lead the U.S. working class and indeed,  the whole of humanity out of the dead end of capitalism.