The Disgrace of Donald Sterling 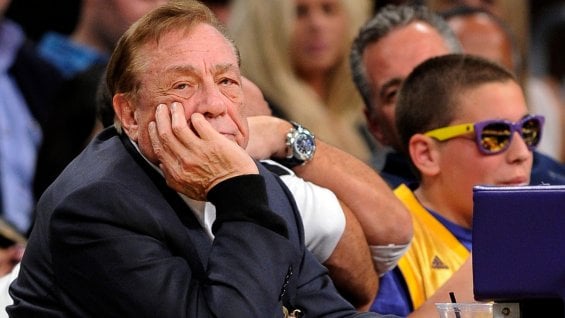 Donald Sterling, owner of the Los Angeles Clippers, brought upon himself a frenzy of news coverage and celebrity condemnations for his racist remarks. In response, the league is moving to push him out. The NBA Commissioner has announced a “lifetime ban” for Sterling from league events and facilities, fined him $2.5 million, and is exploring avenues to force him to sell the team. Sterling, incidentally, would stand to gain $575 million dollars in such a sale—an easy way to recover the spare change lost to the fine.

These events were set off by a leaked conversation between Sterling and his girlfriend, in which he reproached her for appearing in a photo with basketball star Magic Johnson. He complained: “It bothers me a lot that you want to broadcast that you’re associating with black people. Do you have to?”

Such words should surprise no one familiar with the life and times of Donald Sterling. His history of racism against black, Latino, and Asian people, misogyny and sexual harassment, and general ugliness of character is legendary. Sterling is a modern rags to riches story, a true exemplar of the American dream. Born Donald Tokowitz to Jewish immigrant parents and raised on the modest income of a produce salesman, he distinguished himself early on for his obsession with acquiring wealth. After graduating from law school and changing his last name, Sterling launched himself into Los Angeles real estate, becoming a powerful landlord notorious for his harassment of tenants.

As his assets swelled, Sterling’s passion for money-making continued uninterrupted save for one distraction—his bigotry. Sterling pursued an aggressive policy of private sector segregation, refusing to rent to tenants looking for apartments in areas where they would be the minority. He bullied renters with arbitrary evictions, especially targeting blacks and Latinos. According to his business acumen, Latinos are undesirable tenants as they “smoke, drink, and just hang around the building,” and “black tenants smell and attract vermin.” A subsequent series of lawsuits lost him millions, but only after his tenants were subjected to the abuse, sometimes resulting in the loss of their homes. An ESPN profile details one outstanding case:

“When Sterling first bought the Ardmore, he remarked on its odor to Davenport. “‘That’s because of all the blacks in this building, they smell, they’re not clean,’ he said, according to Davenport’s testimony. ‘And it’s because of all of the Mexicans that just sit around and smoke and drink all day.’ He added: ‘So we have to get them out of here.’ Shortly after, construction work caused a serious leak at the complex. When Davenport surveyed the damage, she found an elderly woman, Kandynce Jones, wading through several inches of water in Apartment 121. Jones was paralyzed on the right side and legally blind. She took medication for high blood pressure and to thin a clot in her leg. Still, she was remarkably cheerful, showing Davenport pictures of her children, even as some of her belongings floated around her.

Jones had repeatedly walked to the apartment manager’s office to plead for assistance, according to sworn testimony given by her daughter Ebony Jones in the Housing Rights Center case. Kandynce Jones’ refrigerator dripped, her dishwasher was broken, and her apartment was always cold. Now it had flooded. Davenport reported what she saw to Sterling, and according to her testimony, he asked: ‘Is she one of those black people that stink?’ When Davenport told Sterling that Jones wanted to be reimbursed for the water damage and compensated for her ruined property, he replied: ‘I am not going to do that. Just evict the bitch.’”

Court documents finish the story: “Ms. Jones… suffered a stroke caused by the stress [of Sterling’s] housing practices. On July 21, 2003, Ms. Jones passed away as a result of that stroke.”

Nobody, regardless of income status, deserves to be discriminated against for any reason whatsoever. But next to the story of Kandynce Jones, Magic Johnson suddenly seems very comfortable. The silence of the government, the media, and the league on the horrors Sterling imposed on his working class tenants sharply contrasts to the attention given to his insult of the multi-millionaire Johnson, graphically illustrating the class basis of racism.

Indeed, Donald Sterling is a walking caricature of capitalism’s vices. His famous “eccentricities” include buying out full-page ads in newspapers featuring full profiles of his face, promises of philanthropy as grandiose as they are empty, harassing his tenants, racially harassing black employees, sexually harassing female employees, paying women for sex, throwing elaborate mansion parties with an ensemble of B-list celebrities and an entourage of female “escorts,” and so on. His narcissism, chauvinism, and lust for money and control combine for a self-parody of bourgeois society. He exemplifies the cultural malaise of today’s capitalism, even changing his name to a celebration of the status symbol sterling silver. If Gatsby was the tragedy, Sterling is the farce.

Not only does he personify the decay of culture under capitalism, he ran the basketball team itself like a factory, interested only in turning a profit. Neglecting the needs of the team, underinvesting to minimize risk and maximize return, and treating his employees like so many disposable commodities, he transformed the Clippers from an underwhelming investment opportunity to a regular source of hundreds of millions of dollars of profit. The team also became famous for its unrivaled streaks of losing seasons; what was good for business was not good for the team’s win record. The fans were let down, the sport disgraced, and his employees’ futures wasted—but Sterling made a fortune. His ownership reads like an allegory of capitalism and humanity.

Sterling’s actions were a cartoonish reflection of the system that rewarded him, and his outlook even more so. Pondering the value of his players, Sterling once declared “I support them and give them food and clothes and cars and houses! Who gives it to them? Does someone else give it to them?… Who makes the game? Do I make the game, or do they make the game? These are 30 owners that created the league.” What better narration of the capitalist story could Marxists ask for? The bourgeoisie enjoy the narcissism of unchecked power; they believe they are “job creators,” that the labor of others is made possible by their genius and virtue, and that the fruit of that labor is thus naturally theirs to enjoy. The truth is the opposite. If not for the workers, there would be no industry, no production, no wealth. Thirty owners do not create the NBA, they leech off the sweat and labor of their workers and the hard-earned dollars of fans. The game isn’t made by thirty businessmen unable to perform a layup, but by the players.

The obscene profits that Sterling and his counterparts siphon from the sport should be returned to the people who make it possible—the players, the stadium employees, and entire working class whose toils allow television sports to exist. Unless the franchises are to be left as playthings and investment opportunities for playboy billionaires, the NBA must be brought under public ownership and democratically controlled in the interests of its workers and the broader public. Donald Sterling’s behavior is not an exception but a product of the NBA and capitalist system that he has blossomed under.

The league commissioner is threatening Sterling’s ownership, but one should not mistake this noise for real action or even an attempt at it. Sterling’s lifestyle and business practices were an open secret for decades. The ruling class and their media ignored his actions until the story was beyond their control, and then hypocritically denounced him to save the reputation of owners everywhere.

The denouncements reveal, not a dirty conscience of the bourgeoisie but a general shift to the left in mass consciousness. It was not too long ago that major sports leagues could be openly racist without worry. Today, after the gains of the labor movement in civil rights and in a time of capitalist crisis, the masses are questioning capitalism and its culture. It is a measure of just how far consciousness has changed over the past half century that this lucrative monopoly has deemed it crucial to their business to sacrifice one of their own.

But commissioner Adam Silver doesn’t even deserve credit for the damage control. It’s uncertain if Sterling would have ever received such a steep punishment if it weren’t for the involvement of the players. Their vocal protests on social media and beyond, the silent protests of the players before games, and the outspoken activity of the players’ union put inescapable pressure on the commissioner and the owners to deal with Sterling. The union’s vice president even announced the possibility of player “boycotts”—or strikes. Here is the real motor force of progress: not the owners but the workers.

Donald Sterling, in trying to justify his racism, declared to his girlfriend “It’s the world! You go to Israel, the blacks are just treated like dogs… we don’t evaluate what’s right and wrong, we live in a society. We live in a culture. We have to live within that culture.” For all of his immaturity and ignorance, he has the germ of a correct idea. The primitive accumulation of American capitalism was made possible by the Atlantic slave trade and the conquest of Indian lands; its very origin is drenched with racism. The excommunication of Sterling from the esteem of bourgeois society was a solution as effective as amputating the pinky finger of a corpse. Cosmetic changes cannot touch the real problem. If racism is to go, then so must the whole rotten system.