The Fight Against Police Brutality in Phoenix

Along with other states that share the nearly 2,000-mile Mexican-American border, Arizona suffers under the intensified contradictions of capitalism. As millions of immigrants flee economic, social, and environmental disasters in their countries of origin, the crisis-ridden bourgeois nation-state is being stressed like never before, and the workers of the region must bear the brunt.

Phoenix, the fifth-largest city in the country, has witnessed significantly more police brutality than comparably sized American cities. In 2018, the City of Phoenix Police Department was involved in 44 officer-involved shootings. Philadelphia, San Antonio, and San Diego, the three closest cities by population size, had a combined total of 30 officer-involved shootings (with 12, 12, and 6, respectively). Even in comparison to larger cities, Phoenix’s total was relatively high. The New York City Police Department reported 13 shootings through November. Los Angeles and Chicago each reported 31 shootings through December, and Houston, 16. In addition, the City of Phoenix accounted for over half of the officer-involved shootings in Maricopa County, in which there were 82 total shootings.

So far in 2019, the Phoenix Police Department is responsible for four deaths, and there have been 11 officer-involved shootings in Maricopa County, four of which were teens. Phoenix Police Chief Jeri Williams has defended her “boys in blue,” saying that the shootings had little in common with one another. The city council also supports the police department wholeheartedly, painting them as defenders of the public from the “more violent population” in Phoenix. Ken Crane, the president of the Phoenix Law Enforcement Association, told the New York Times that there are more police shootings because in Phoenix there are “a lot more people that want to pull guns and knives on the cops.”

The Phoenix Police Department, however, has shown little initiative in proving its innocence. The Republic found that punitive discipline was exceedingly rare for metro Phoenix police departments. Internal investigations found “officer wrongdoing” in just 21 out of 353 cases submitted since 2014, or about 6%. Police body cameras have also provided citizens of Phoenix little accountability over the department. In 2017, Phoenix City Council stalled on purchasing more body cameras for its force of nearly 3,000 officers (at the time, they only had 300 cameras). It was only after rising pressure in January and February of this year, organized by local organization Poder In Action, that the city approved $5.7 million to purchase over 2,000 more body cameras and to hire 30 new civilians to review the footage.

But civilian shootings are not the only outrages perpetrated by police in metro Phoenix. Poder in Action reported that in December 2018, Phoenix police stopped a young woman, Erica Reynolds. Reynolds was apprehended by officers when they suspected that she illegally possessed marijuana. When officers could not find the substance in her car, she was taken into police custody and subjected to an illegal body cavity search before three officers, a lieutenant, and a clerk.

This breathed new life into the mobilizations against police brutality. Most recently, in the city of Tempe in Maricopa County, several organizations have campaigned in honor of 14-year-old victim Antonio Arce. In January, police officer Joseph Jaen responded to a report of a suspicious car possibly involved in a burglary. Jaen shot at Arce twice as the boy fled, striking him once between the shoulders. His body was found with an orange-tipped air-soft gun. Tempe PD publicly released video footage from Jaen’s body camera before showing it to Arce’s family. The video, however, stops just short of showing Arce’s body, and only Arce’s family and journalists have seen the unedited footage.

On February 28, activists went to the City of Tempe Council Meeting a second time, where they forced an intermission by chanting Antonio’s name. The scene is all too familiar over the last three years. The shootings of Tamir Rice and Michael Brown sparked a deep indignation among broad layers of society. The recent shooting of Stephon Clark in Sacramento brought that city’s council to chaos. In Tempe, the #JusticeForAntonio organizers directed several activists out of the meeting to avoid conflict with the police, but four were nevertheless arrested as they protested in the streets. 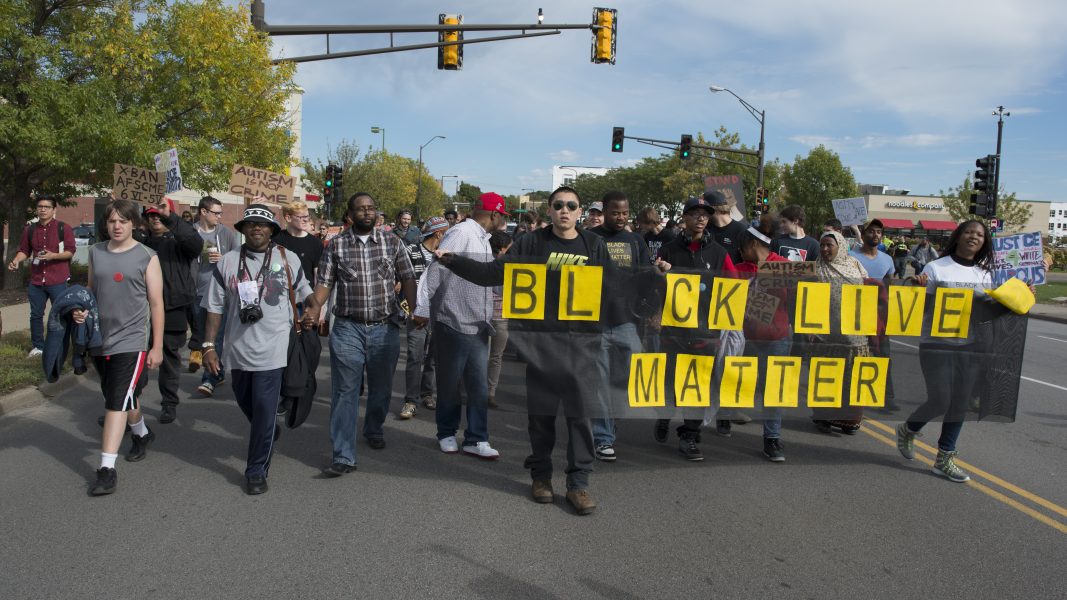 The spontaneous element of #JusticeForAntonio is no accident. The activists’ leadership is made up of a heterogeneous coalition. / Image: Fibonacci Blue via Wikimedia (CC BY 2.0)

The spontaneous element of #JusticeForAntonio is no accident. The activists’ leadership is made up of a heterogeneous coalition. Poder In Action, Black Lives Matter Phoenix Metro, and other leftist groups have raised these demands: Fire Tempe Police Officer Jaen and Chief Sylvia Moir; form a police civilian review board with the power to hire, fire, and subpoena officers; rename a park in Antonio’s honor; and ensure a transparent investigation into Antonio’s death.

In the city of Phoenix, the Arizona Poor People’s Campaign is also demanding a civilian review board with the power to recommend an officer’s termination. In most cities in the western United States, such as Phoenix and Tempe, police officers cannot be terminated by elected officials. In Tempe, only the City Manager, who is in turn appointed by the City Council, can terminate the Police Chief. However, we must ask, will a civilian review board prevent such tragedies from reoccurring? Even if a civilian review board could terminate officers and police chiefs, it would only provide a means to respond to police brutality after the fact. Furthermore, any such civilian review board would come under the authority of the state and federal courts, which could counteract their decisions even before they are implemented.

In Arizona, community activists acknowledge that anti-worker legislation such as Arizona SB 1050 and the “Respect the Ride” program on metro transit are part of a structural problem when it comes to the police. However, they typically lay the onus of this problem on individuals like Joe Arpaio, the former chief of the Maricopa County Sheriff Department. Arpaio is now a nationally infamous character, and he makes an easy villain. From his role in the establishment of an inhumane tent city jail to his reintroduction of chain gangs, his record is unquestionably despicable. Arpaio is an undoubted enemy of the working class. The Sheriff’s goons rounded up thousands of immigrant workers from 2005 to 2011 by conducting saturation patrols in Latino neighborhoods. However, any serious student of history knows that the individual is unable to determine the whole of society. Sheriff Joe’s influence, even before his replacement in 2017, cannot account for the ongoing rottenness of Phoenix’s system of crime and punishment.

While the traits of a leader accentuate this or that aspect of an organization, it does not determine the overall character of that organization. Arpaio was an unquestionably cruel and cynical law enforcer, but he was no more than a manifestation of everything reproachable in capitalist law enforcement generally. The raison d’être of capitalist policing in Phoenix is the defense of private property, and it merely took a particularly hideous form in the person of Sheriff Joe. 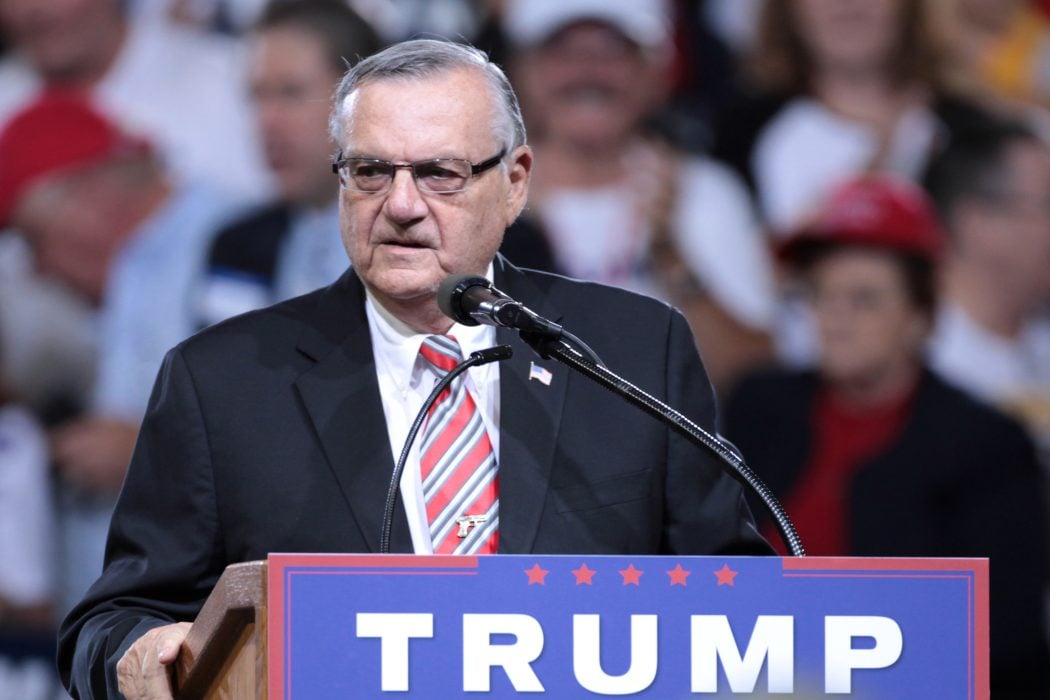 Arpaio was an unquestionably cruel and cynical law enforcer, but he was no more than a manifestation of everything reproachable in capitalist law enforcement generally. / Image: Gage Skidmore via Wikimedia (CC BY-SA 3.0)

We wholeheartedly agree that justice must be sought for Antonio and all other victims of murder-by-cop. We understand people’s desire to bring the police to heel. Community activists want control over their police departments to stop the ongoing violence. However, civilian review boards cannot give them what they seek. In fact, none of the demands raised above will solve the structural problem at the heart of policing in capitalist society. We cannot end police brutality by merely electing new officials, establishing “community control,” or convicting “America’s Toughest Sheriff.”

As Marxists, we must explain that the only way to end police violence is to end a society based on artificial scarcity that makes defenders of private property necessary in the first place. We live in a class society, the structure of which, in the final analysis, is determined by the economic relations between capitalists and workers. The nature of the state, too, is determined by these relations and is a tool for defending the interests of the ruling class. The police, courts, prisons, military, and many other state and federal agencies are part of an apparatus of control used by the capitalist class to facilitate the exploitation, oppression, and division of the working class.

The capitalist mode of production requires an armed, organized force ready to intimidate and eliminate any threat to the capitalist’s private property. Under socialism, a society in which humanity shares the fruits of its labor and community safety is socialized, the state will gradually wither away as the need for it organically disappears. It will only be after the socialist revolution that we can put the victims of police brutality finally to rest. Capitalism is the root cause of police brutality. Therefore, to abolish the police, we must abolish capitalism.