The Fraud of Obama’s Immigration “Reform” 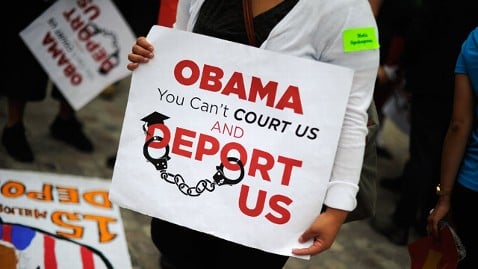 Millions of US immigrants, their families, co-workers, friends, and supporters had their hopes for relief from their difficult conditions built up by advance hype for President Obama’s November 20 speech on immigration policy reform. All such hopes were cruelly shattered once the outlines of his policy shift became more clear—an outline with an uncanny resemblance to GW Bush’s own proposals.

Using the plight of immigrant workers as a playing piece in a cynical political game with his Republican counterparts, Obama’s executive action only perpetuates the legal oppression of these workers, whose treatment at the hands of US capitalists includes precarious employment, low wages and wage theft, discrimination, and the constant threat of arrest and deportation.

Far fewer than half of the estimated 11.3 million undocumented immigrants are affected by the executive order, which “defers” the threat of deportation for those workers who register —under murky provisions that won’t be announced until at least March 2015—and can prove a minimum of five years’ residence. They must submit to a rigorous review and approval of how they have conducted their personal lives, and if they meet the government’s criteria, may have their deportation deferred for three years.

According to a senior Obama official: “Deferred action is not a pathway to citizenship. It is not legal status. It simply says that for three years, you are not a law enforcement priority and are not going to go after you. It is temporary and it is revocable.”

A small expansion of the Deferred Action for Childhood Arrivals (DACA) program, which delays deportation of children born elsewhere and brought with their parents to the US, is included. However, at the same time, Obama’s action promises to expand what has already been the most massive deportation presidency in US history through the expansion of the border police and increased funding for Immigration and Customs Enforcement (ICE).

Obama defended this beefing up of the repressive forces by slandering the immigrant population as a haven for foreign-born criminals—even though “A 2007 study by the Immigration Policy Center found that the incarceration rate for immigrant men ages 18 to 39 in 2000 was 0.7 percent, while the incarceration rate for native-born men of the same age group was 3.5 percent. While the foreign-born share of the U.S. population grew from 8 percent to 13 percent between 1990 and 2010, FBI data indicate that violent crime rates across the country fell by about 45 percent, while property crime rates fell by 42 percent.”

Since the onset of the Great Recession in 2007–8, immigration to the US has fallen, as employment possibilities have dried up. Nonetheless, the terrible conditions of poverty and violence throughout Latin America, rooted in the domination of these countries by US corporations, has assured a steady flow of uprooted and dispossessed farmers and workers towards the North. It is no accident that the Obama administration scheduled his speech so that its coverage would eclipse news of the massive demonstrations taking place in Mexico against the widespread government corruption, which led to the massacre of 43 students in Ayotzinapa. Obama has maintained silence about the responsibility of his junior partner, Mexican President Peña Nieto, for the intensifying crisis.

“Even as we are a nation of immigrants, we’re also a nation of laws,” said the pious Obama in his speech. “Undocumented workers broke our immigration laws, and I believe that they must be held accountable.” The only laws broken by immigrant workers are those laws turning them into second-class human beings, laws that are an affront to basic human rights and dignity. According to a recent New York Times/CBS News poll, 63% of US citizens agree that all immigrants should have the right to continue living here—in direct contradiction to the policies of both parties, and their immigration laws.

Obama dared the Republicans, who recently won complete control of Congress, to “pass a bill” if they don’t approve of his executive action—knowing full well that the Republican Party will codify even worse provisions into law, which Obama will then be “compelled to sign,” under the pretense of “bipartisanship.”

In this fashion, Obama and the Democratic Party can deflect responsibility for their increased repression of workers’ rights, while they try to manipulate immigrants, human rights activists, and supporters of workers’ rights in general into continued support for the “left” boot of capitalist politics in the 2016 elections.

This is a dangerous game for capitalist politicians to play. The so-called “recovery” from the Great Recession has been flat-to-negative for the vast majority of workers. Building anger at the steadily eroding living standards portends explosive new outbreaks of strikes and demonstrations at some point in the future. Once the pressure is high enough, any new affront can potentially light the short fuse.

In 2006, the immigrant population reached the limit of its tolerance for abuse, and in massive numbers reintroduced May Day as a working-class holiday here in the country where it was born. Millions of immigrants skipped work that day and marched in huge, militant parades, a powerful demonstration of the central role these workers play in the US economy.

Those mobilizations have dwindled in size since then, as “community leaders” diverted much of the momentum into the empty promises of the Democratic Party and the courts. But the pressure is rebuilding, and coincides with the seething unrest among other layers of the working class.

Stirrings today among union workers to break with the Democratic and Republican parties and to form a mass independent party of labor have the potential to catch this wind in their sails, and steer that storm of unrest into a powerful political and social movement.

In order to gain real traction, that movement must start from the objective needs of the workers themselves, and not simply from what the rulers are willing to give up at first blush. The question is, what kind of program can speak to the needs of immigrant workers, and unite them with the rest of the class?

We in the Workers International League, the US section of the International Marxist Tendency, are internationalists. We stand for full and equal rights for all, no matter where we were born. In order to unite the working class in the struggle for humanity’s socialist future, our program includes the following measures:

No to Racism, Profiling, and Police Brutality

No to racist and antiworker police, courts, and laws. End the phony war on drugs in the U.S. and internationally. Abolish the death penalty and release all political prisoners. For the immediate and unconditional legalization of all undocumented immigrants. Full rights and amnesty for immigrant workers and their families. End all racist immigration and asylum controls. For the right of residency and dual citizenship. For the right to speak one’s own language. Access to Social Security with equal benefits for all. No to “guest worker” programs. For family reunification and an immediate end to raids and deportations. No to border walls, militarization, and repression on the border. For the unity of the working class: mobilize the labor movement to combat racism and discrimination and to improve conditions for all workers.

End NAFTA, CAFTA, and pull out of the WTO and other bankers’ deals that are the tools of imperialist exploitation. No to the FTAA and the TPP. Abolish the World Bank and International Monetary Fund, and write off the debts imposed by Wall Street and imperialism. For international economic cooperation based on the interests of working people, not a handful of multinationals. No to the war on working people at home and abroad. Cut the military budget and invest instead in social needs. No to militarism and intervention in the Middle East and around the world: withdraw all troops from Iraq and Afghanistan now! End the embargo on Cuba. Hands off Latin America! Unite with Canadian and Latin American workers in a socialist federation of the Americas as part of a world socialist federation.

These are just part of the program of action the WIL proposes for addressing the conditions of capitalist crisis faced by workers and youth here in the US and around the world. We invite you to join us in the fight for a better world!

Leaflets for use in the struggle for immigrant workers’ rights are available in both English and Spanish.

To learn more about the US section of the IMT, our program, and to get involved, visit www.socialistappeal.org.