The Menace of Janus and How to Fight Back

The US Supreme Court is reviewing Janus v. AFSCME, a case that, if ruled against the unions, could impose “right-to-work” nationally for public sector unions. Currently, public sector unions in 22 states and Washington D.C. can collect agency fees from non-union members, who thereby benefit from union representation and contracts. Mark Janus, the plaintiff, argues that collective bargaining is speech and that closed shops in which all workers must pay agency fees to the union, whether they are members or not, goes against his First Amendment rights. Or rather, this is the argument of the big-business lawyers using him as a front for their assault on labor. If union agency fees are declared unconstitutional, the unions’ finances will be squeezed dry.

Unionization rates have steadily declined in the US over the past few decades. In 2017, private sector unionization was just 6.5%, while public sector unions fare better at 34.4%. Because of this, they are considered the last bulwark against the retreat in union density. Little wonder that Janus is feared by trade union leaders. Andy Pallotta, President of New York State United Teachers (NYSUT), echoed a widespread sentiment: “This is not a drill—this is an existential threat to the labor movement.”

But the leadership has long taken the rank and file for granted, refusing to mobilize them in class struggle, conciliating with the bosses, and coasting on the guaranteed income from agency fees. Faced with the threat of Janus, labor leaders responded by calling for a “Working People’s Day of Action”—a one-day informational demonstration. 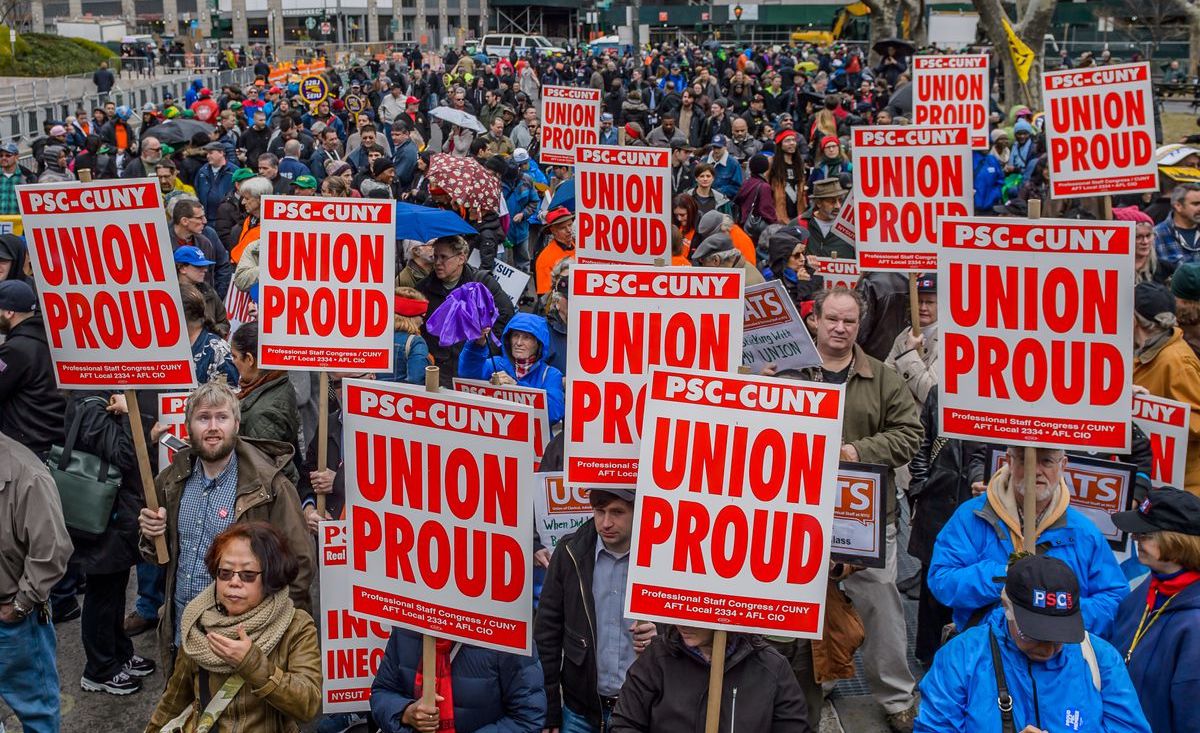 Union workers rally against Janus in NYC for the “Working People’s Day of Action.”

The labor leaders see the fight against Janus in administrative terms, rather than broadening it towards a perspective of all-around class struggle. For example, the call for a day of action is perfectly fine—but mobilization isn’t an end in itself. The question of class-independent aims and direction is decisive. In this case, Democrats such as New York Governor Cuomo and NYC Mayor De Blasio were invited to speak at a rally. But are the Democrats really “friends of labor?”

If a national “card check” program existed in the US, this would enormously facilitate the formation of unions, and the whole terrain would be far more favorable. Yet three Democratic presidents—Carter, Clinton, Obama—refused to pass this law while their party controlled Congress. Nor do they plan on dismantling any of the major antiunion laws such as Taft-Hartley. It is no surprise that the capitalist media, insofar as they talk about the case in relation to the Democratic Party, focus exclusively on how the ruling will hurt the party’s finances. The Democrats see unions as cash cows, nothing more.

NYC mayor De Blasio was invited to speak at a union rally despite Democrats’ disregard for antiunion laws and workers’ rights.

The way to strengthen the rank and file is not merely through “conversation—listening and engaging” or investing in “new signup technologies.” Labor leaders must show the way forward with a bold program and a willingness to strike, hitting the bosses’ profits directly. The West Virginia teachers demonstrated what can be achieved when we link up with the broader working class. The narrow sectoral view that sees this as an exclusively public sector struggle, with private sector unions seen as too weak and a lost cause, must be replaced with that of class unity.

Instead of viewing the fight against Janus as a purely economic struggle within the unions, we must see that every fight to strengthen the existing unions must be linked to the fight against a political and economic system that is fundamentally antiunion. Every real class struggle sooner or later poses the question of legality. Over reliance on bourgeois legality is a recipe for defeat. Not only are the laws written by and for the capitalists, but their courts can always figure out ways around the implications of their previous rulings. Waging the struggle in the courts, state by state, allows the capitalists to stall and buy time, with lawsuits stuck in litigation limbo for years. This lack of momentum will not build enthusiasm or inspire the working class to take its future into its own hands.

A negative ruling would be a major blow to organized labor. However, under conditions of capitalist crisis and with pressure building from below, Janus could potentially open up other, unforeseen dynamics—and even get out of control of the labor leaders. Indeed, serious capitalist periodicals such as the Washington Post are worried about this possibility: “The combination of exclusive union representation, mandatory agency fees, no-strike clauses and ‘management’s rights’ are the foundation of our peculiar labor relations system . . . Knock one part out, as the Janus plaintiffs aim to do with agency fees, and the whole system can fall apart. Employers will not like the chaos that this will bring.”

Ultimately, only by going beyond the narrow limits allowed by bourgeois legality can workers win strikes. In order to transform a defensive struggle into an offensive one, we urgently need a political party of the working class fighting for socialist policies. Such a party will fight against the right-to-work regime on a national level, and against all anti-union legislation. Instead of inviting Democratic Party politicians to “Days of Action,” the labor leaders must direct their energies towards mobilizing the workers for strike action and building a party of our own.