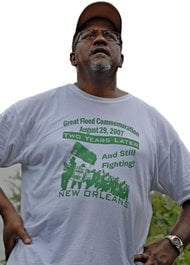 There is a new political party on the horizon that is attempting to offer working class Blacks, working people in general, and the poor an alternative to the two capitalist parties, the Democrats and the Republicans.  Stunned by how little has been done by either capitalist party for anyone who was devastated by Hurricane Katrina in New Orleans – other than the rich and powerful – the Reconstruction Party was officially launched on September 2 of this year.  As a first step, the Party is running Malcolm Suber for City Council in New Orleans.  Suber is a former textile worker and auto worker and member of the UAW, and has been active in labor struggles since moving to New Orleans, especially around union organizing.  He was a founding member and national organizer of the People's Hurricane Relief Fund and Oversight Coalition, a broad coalition of grassroots groups organized around the demand for the reconstruction of New Orleans under community control.

In part, this movement is a response to the ruthless policies implemented by the ruling class in New Orleans.  Taking full advantage of the helpless situation of many working people, especially the Black majority of New Orleans, the capitalists have pressed to privatize everything, including schools, health care, and prisons, while at the same time preventing the vast majority of those who were forced to leave from returning to their homes.

In a statement announcing his candidacy, Suber proclaimed:  "We want to win this seat so working class and poor Black folk have some representation at City Hall and to move forward towards building the Reconstruction Party."  He argued:  "If we want real justice and equity, we'll have to do it ourselves.  Certainly the Democrats and the Republicans make empty promises to the people; they only give awards to those who are politically connected."

In another statement, Suber emphatically promised, "In the struggle of labor against the bosses I have and will always stand with the working class.  I have always stood for the unionization of workers and the repeal of the anti-union 'right to work' laws."

The Reconstruction Party was conceived about a year ago by the victims of the hurricane who were abandoned by the capitalists and their political parties.  Several predominantly Black organizations, including the People's Hurricane Relief Fund and Oversight Coalition, which calls for the right of return, as well as the broader Reconstruction Movement, took the lead in raising the idea of a new independent, working class party.  The platform of the Reconstruction Party focuses on issues fundamental to working people.  It calls for genuine democracy for the majority, the re-opening of public housing, rent control, compensation for home owners affected by the hurricane, health clinics at public schools, the creation of jobs at a living wage aimed at reconstruction, and support for public education.

Those involved in the Reconstruction Party are already reaching out to people across the country in the hope of establishing a national basis for the party with this call:  "We're calling upon our friends and supporters from around the country to support the formation of the Reconstruction Party, which is needed to address the myriad problems of institutional racism, class domination and historical poverty and sexism which plagues working people in the cities throughout the country." The response has been positive.  Cynthia McKinney, former Democratic Party member of Congress for the people of Georgia, has declared her support for Suber's campaign, adding:  "The facts on the ground clearly demonstrate that we cannot rely on failed politicians and failing political parties which are complicit in the lack of preparation, the failure to rescue, and the continued refusal to advance the right to return for hundreds of thousands of people who continue to be displaced."

Al Rojas, National Coordinator of the Frente de Mexicanos en el Exterior in Sacramento, CA, sent this support:  "We in the Frente de Mexicanos en el Exterior … have followed with great interest your initiative to launch a new and independent Reconstruction Party in the United States … We cannot allow them [the U.S. government and the corporations] to divide us.  We must build a united movement of Black and Latino workers that demands the right of return for the Black majority and that also demands amnesty and full legalization for all Latino workers in the Gulf Coast and across the United States.  A massive public works program could be instituted in New Orleans and the Gulf Coast region to put everyone, Blacks and Latinos, to work on a true Reconstruction Program."

Donna Dewitt, President of the South Carolina AFL-CIO and National Co-Chairperson of the Labor Party, has also voiced support:  "I hope you will join me in saying 'Enough is enough!'  Beginning with this special election in New Orleans, give governance to the real people.  Malcolm Suber will speak for them and ignite a flame that will speak for working people throughout our nation."

We in the Workers International League view the Reconstruction Party as a positive first step for workers to break from the capitalist political parties and fight for own interests, which stand in stark contradiction to those of the capitalists.  We endorse the Suber campaign.  As this party evolves, it will have to play a leading role in the antiwar movement because of the vast amount of money being directed to U.S. imperialist adventures aimed at profits, not real human needs.  Capitalism aims above all at making the rich ever richer. It lives by the creed of taking from the poor in order to give to the rich.  Only by creating our own political party will we be in a position to unite all of capitalism's victims – working people, particularly Blacks, immigrants, etc. – and then we will be in a position to put up a real fight for our interests and build a just society.