The Strike at American Axle: No to Concessions 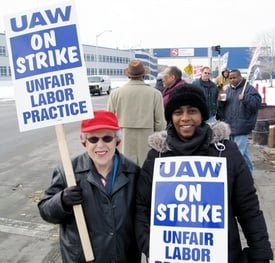 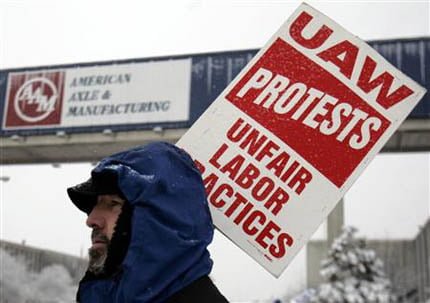 Since February 26th, 3,600 members of the United Auto Workers (UAW) have been on strike at American Axle & Manufacturing. As we go to press, contract negotiations are underway. The nearly three month strike has successfully shut down all key production lines, exhausted the company’s inventory, and sent its profits into a nose-dive. The bosses are against the ropes. So why is the UAW talking wage cuts and plant closings? The UAW must put up a militant fight and defend the jobs and wages of its members!

Workers in the auto industry have been under attack for years. They have seen their wages, benefits and job security go down the drain in the face of corporate “downsizing”. At its peak in 1979, the UAW had 1.5 million members. In 2007, the membership had been reduced to 464,910 members

American Axle, a former GM subsidiary, produces axles and drivetrain components at four U.S. plants, which are needed by auto makers to manufacture light trucks and SUVs. American Axle also owns a smaller plant in Mexico, which is not unionized and has continued production since the strike began in February. At the U.S. plants, located in Michigan and New York, foremen and office staff have been able to keep a few lines producing Toyota parts running. However, all of the key production lines have been shut down. By far the company’s biggest customer is former parent GM, and since the strike began, GM has been forced to conduct rolling shut-downs of 30 North American plants due to a lack of needed parts. Car components sold to GM accounted for 80 percent of American Axles sales in 2007

When contract talks initially broke down in February, the bosses were demanding a 50 percent wage cut and plant closings. The company wants to reduce total hourly costs (wages plus benefits) from $65 an hour to $27 an hour. This would drop wages from roughly $27 an hour to between $14 and $18 an hour, which is similar to the second-tier wage structure now in place at Ford, GM and Chrysler. Management is also seeking an increase in prescription co-pays, elimination of vision benefits and wants to replace pensions with a 401(k) plan. Chairman & CEO Richard Dauch claims that the cuts are necessary in order for the company to compete with other U.S.-based parts suppliers, such as Dana and Delphi. Both of these companies have used Chapter 11 bankruptcy proceedings to force wage and job cuts on their workers. But American Axle is a profitable company. In 2007 the company posted profits of $37 million, which is far cry from bankruptc

The strike has seriously hurt American Axle’s profits. At the end of April, the company reported first quarter sales of $587.6 million, its lowest sales figure yet. CEO Dauch estimated that the company lost $132 million in first quarter sales due to the strike. Overall, the company reported a net loss of $27 million for the first three months of the year. At the same time last year, American Axle made a $15.7 million profit. Yet despite a solid strike that has put the company’s back to the wall, it appears that the UAW officialdom is once again gearing up to snatch defeat from the jaws of victory

According to a May 1st article in the Detroit Free Press, the UAW bargaining committee and American Axle management are close to an agreement. But the likely terms that the UAW leadership will put to the membership contains all of management’s main demands. The article said that the proposed settlement could include: closure of the Detroit and Tonawanda, NY forging plants, reduction of production workers’ hourly wage to $17 an hour, and a reduction of skilled workers’ hourly wage to $25.50. Current wage rates are $28 and $30 an hour respectively. Another potential that was listed in the Detroit Free Press article was that the UAW bargaining committee may give in to management by shedding the company’s national contract, instead leaving the company to bargain with the UAW locals representing individual plants. If implemented, this would significantly weaken the strength of American Axle workers to collectively bargain with the company

In addition, the UAW should  demand that the workers in the Mexican plant get what the UAW workers get in pay, benefits and working conditions so as not to have this factory undercut the others

What is needed in the UAW are militant, class struggle policies that defend our interests as workers – not corporate “competitiveness” or the bosses’ profit margins. Many in the current union leadership have the perspective that by giving the company all or nearly everything they ask for, workers will somehow be rewarded with job security. But the downward spiral of concessions hasn’t led to better job security, in fact since 2001 alone the UAW has lost over a third of its membership. The only way to improve our job security, wages, and working conditions is to return to the militant traditions of struggle which built the UAW in the first place. This means we must abandon the policy of “partnership with the bosses.” If the leadership presents American Axle workers with a concession contract, send them back to the bargaining table!