The Sudanese Revolution Roars Back to Life 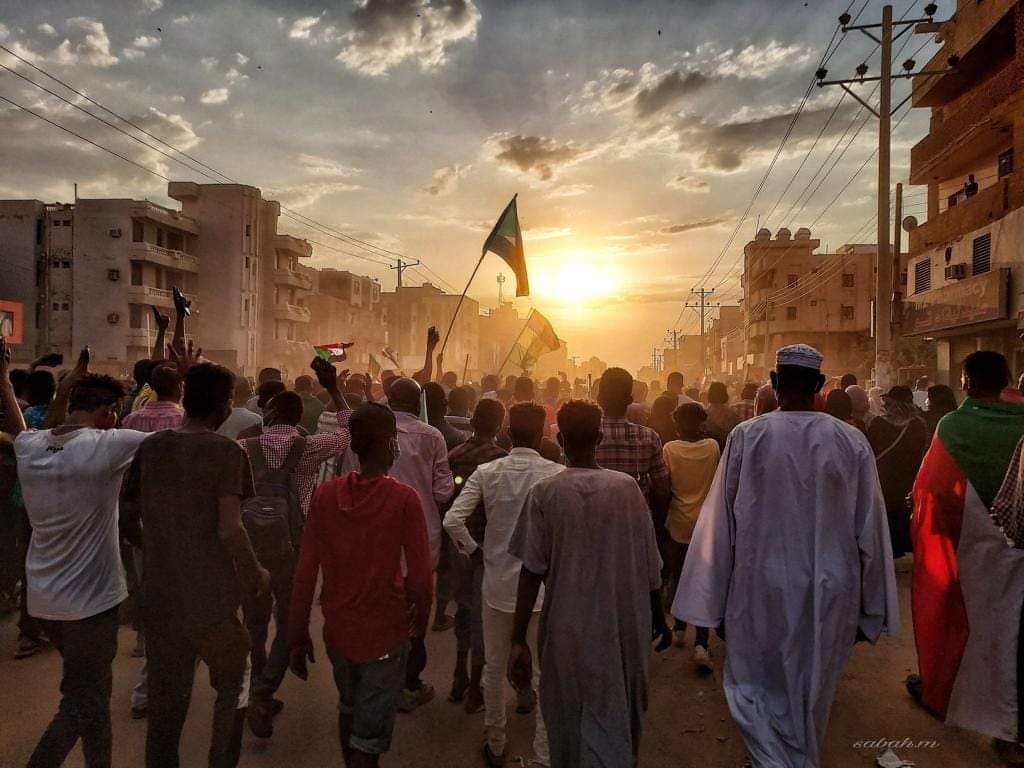 In the spring of 2019, the masses of Sudan rose up and toppled the dictatorship of General Omar al-Bashir, ending his 30-year reign. Today, the masses are back on the streets in yet another revolutionary movement. Detailed, blow-by-blow analysis of these breathtaking events is available on marxist.com.

As revolution once again sweeps across Sudan, it is worth revisiting the exhilarating events of 2019. In the spring of that year, the masses of the northeast African country of Sudan rose up and toppled the dictatorship of General Omar al-Bashir, ending his 30-year reign. It was just one of many revolutions that swept the globe that year. At the time, the global investment consulting firm Maplecroft concluded that fully 25% of all the countries in the world had “witnessed a significant uptick in protests, which intensified during the last quarter.”

But out of the many general strikes, mass movements, upheavals, and revolutionary uprisings of recent years, the Sudanese revolution is perhaps the most advanced example of a revolutionary struggle to transform society. As one commentator from the Financial Times put it:

One cannot know for sure what Russia felt like in 1917 as the tsar was being toppled, or France in 1871 in the heady, idealistic days of the short-lived Paris Commune. But it must have felt something like Khartoum in April 2019.

All the elements of a classical proletarian revolution were on display in Sudan. After years of social and economic dislocation, IMF-backed austerity measures, and cuts to subsidies on basic necessities like bread and fuel, a boiling point was reached and the masses lost their fear of the old regime.

However, the fall of al-Bashir was not the end but the only beginning of the revolution. On the one hand, it sent the ruling class and the military generals into a desperate frenzy to maneuver and hold onto power—changing everything so that nothing fundamental would change. On the other, it awakened the Sudanese masses and gave them a glimpse of the colossal potential power in their hands.

In addition to spontaneous mass demonstrations in every city, there was a distinct proletarian character to the revolution, expressed in the widespread acts of working-class self organization and mass strike action. Strike committees sprang up in every workplace, resulting in a general strike that paralyzed the country and saw the participation of virtually 100% of the workers of Khartoum.

These committees were not merely organizational bodies for coordinating the strike, but took on the character of general assemblies where the workers would elect representatives, discuss proposals and plans, and take decisions. As a result of the overwhelming participation in the strike, all transportation, mines, industry, hospitals, highways, distribution, utilities, etc. were brought under the control of the workers. In addition to the industrial actions, the movement had the support of the state functionaries, 98% of whom organized their own strike action and declared their loyalty to the revolution.

In practice, the Sudanese state was completely suspended in midair during the summer of 2019. The country was in the hands of the revolutionary masses, who set up security checkpoints to prevent armed infiltrators from passing through the barricades. During the general strikes, all the essential operations of society were administered directly by the mobilized masses. Teams of volunteers came together to maintain cleanliness and order, distribute food, and organize transportation. Doctors and medical workers volunteered their services and dispensed medicine and care to those in need.

These initiatives, marked by the ingenuity that characterizes the newly awakened working class in action, culminated in the neighborhood resistance committees, which gave the workers an organized expression.

Despite the boundless creativity and heroism of the masses, the events of 2019 did not end with the victory of the Sudanese working class. This is yet another tragic example of the central question that every revolution eventually faces: the question of leadership and the need for a correct program and policy.

Following the fall of al-Bashir, a self-appointed Transitional Military Council (TMC), consisting of the tops of the armed forces, stepped into the vacuum in an attempt to usurp the revolution. The TMC thereby became the primary focal point of the ruling class and the counterrevolution.

On the other side of the conflict, the Sudanese Professional Association (SPA), as the most organized expression of the movement in the streets, became the de facto leadership of the revolution. The SPA gained its authority in the eyes of the masses for taking a consistent hard line against the old regime, calling for the escalation of street demonstrations into political general strikes, and demanding the removal of al-Bashir.

After the revolution had completed this preliminary task, however, the leadership was left without a clear perspective for how to proceed. Lacking a program for the revolutionary transfer of power, the SPA entered into prolonged negotiations with the TMC, which unfolded as a backdrop to the mass actions in the streets.

Given their largely petty-bourgeois class basis, however, the SPA leaders vacillated and appealed to non-violent civil disobedience. Meanwhile, the military generals responded with implacabile violence and terror. Recognizing that the mass movement risked infecting the regular army ranks with a sympathetic attitude toward the revolution, the generals relied primarily on the Rapid Support Forces (RSF) forged out of the infamous Janjaweed tribal militias that carried out mass killings in Darfur.

Under the command of General Mohamed “Hemeti” Dagalo, the RSF unleashed the most brutal atrocities on the Sudanese people in an effort to crush the movement. This culminated on June 3, 2019 in what is now known as the Khartoum massacre, when hundreds of protesters were attacked, raped, and slaughtered, and their bodies thrown into the Nile River.

Days later, the masses responded to this campaign of terror with the largest general strike in the country’s history, passing once more onto the offensive. But the SPA failed to harness this golden opportunity to seize the initiative and complete the revolution.

With the regular armed forces demoralized and disgusted by the atrocities of the RSF, a bold and systematic appeal to the army ranks to join the side of the revolution would have gained a massive echo. It would have required a resolute lead from the SPA and an assurance that the revolution would fight to the end. With the forces of reaction scattered and outnumbered, a decisive victory was undeniably within reach. Instead, the SPA called off the general strike and returned to the negotiating table, forfeiting the opportunity to disarm the counterrevolution and allowing the remnants of the old regime to retain their grip on power.

The 2019 phase of the Sudanese Revolution ended in an impasse when the SPA came to a power-sharing agreement with the military leaders of the TMC. A “Sovereignty Council” was formed, composed of 11 people: five military, five civilians and one “compromise” member agreed by both sides. Initially the last compromise member was presented as a civilian, but it was later revealed that the “civilian” was a retired military officer. With this maneuver, the TMC secured a loyal majority on the council, composed mostly of members of the deposed al-Bashir regime itself.

This betrayal of the revolution all but guaranteed the events of October 2021, when the TMC generals decided they were tired of the “power-sharing” arrangement, and the facade of civilian rule. In the early hours of October 25, members of the armed forces, led by General Abdel Fattah al-Burhan, abducted Abdalla Hamdok, the liberal Prime Minister appointed by the Sovereignty Council. Other leading political figures were placed under arrest, along with the director of the state TV news network. Flights in and out of the country were suspended, and an internet shutdown was initiated.

This was followed by a televised public address from al-Burhan, declaring a state of emergency, the dissolution of the transitional government, and the installation of military rule until new elections in July 2023. Immediately after the arrest of Hamdok, the SPA issued a statement, calling on “the masses of the Sudanese people, their revolutionary forces, and the resistance committees in neighborhoods in all cities and villages to take to the streets and completely occupy them…”

The response from the masses was immediate. Huge columns of protestors—men and women, adults and children, all chanting and waving flags, many of them armed with sticks, tools, and other common implements—marched in their thousands on the army headquarters in Khartoum.

On the first day of demonstrations after the coup, over a million people poured into the streets of Khartoum. Within days, the demonstrations grew to over four million, comprising roughly 10% of the Sudanese population. Overnight, the spirit of 2019 was rekindled and burst into open flame. Barricades appeared on all major roads and bridges and demonstrators burned tires so the plumes of smoke could provide cover from the security forces.

The resistance committees sprang back to life in cities across the country, and swift preparations for strike action were immediately undertaken. The Sudanese Pilots Union called on their members to join the street protests, declaring a “general strike and civil disobedience” and calling for “all pilots and workers in the airfield to take to the streets and protect the Sudanese people’s revolution.” Dozens of trade unions also made similar declarations.

Hoping to cut across the rising tide of revolt, the RSF forces immediately unleashed mass terror and indiscriminate shootings, killing ten protesters on the day after the coup. But as in 2019, these provocations only hardened the resolve of the masses, who remained on the streets chanting in defiance: “Revolutionaries are not afraid of bullets!” Online footage shows security forces attempting to disperse large crowds of protestors with tear gas, with the people chanting, “The people are stronger!” and “Retreat is not an option!”

The Sudanese Revolution has been roused from its slumber. Despite the disappointment and demoralization of the past two years, the masses understand the implications of a return to direct military rule. Their revolutionary aspirations for democracy and a dignified existence remain intact, and they are not willing to surrender to barbarism and dictatorship without a life-or-death struggle.

The revolution is now at a critical juncture. There can be no negotiation or vacillation. Ultimately, the resistance committees must link up across the country and develop a program for the expropriation of the counterrevolutionary generals, capitalists, and all remaining elements of the al-Bashir regime.

With these resources in the masses’ hands, they will be able to carry out a sweeping program of social and economic transformation to address the immediate material needs of the Sudanese people, laying the foundation for socialism and a new state under the control of the workers and peasants. Stay tuned to Marxist.com for further updates on the rapidly changing situation!