The Turning of the Tide

Editorial for Socialist Revolution Issue 6: Capitalism beware! The West Virginia teachers and high school students nationwide are leading the charge as the mass movement roars back to life.

One of the basic laws of class society is that, sooner or later, everything turns into its opposite. Every empire, state, ruler, and party, no matter how stable and immutable it may seem, will eventually be brought down by a combination of internal and external contradictions. Nothing lasts forever—and world capitalism is no exception. Every aspect of the system is rotten, from its economic foundations to its ideology. Due to the betrayals of the labor leaders, it survived many severe shocks and scares over the course of the last century. But can it withstand the floodtide of economic crisis and class struggle now on the horizon?

The youth have long been written off as self-centered and disinterested in politics. But as we explained in our 2017 US Perspectives document:

The youth are far from “apathetic.” But they are not attracted by stale defeatism and those who accept the status quo. They like underdogs and fighters. We can be confident that a revived labor movement will be flooded and spearheaded by the youth, breathing life into the many struggles that have been brewing in the recent period.

Less than a year later, the high school walkouts and “March for our Lives” confirm the correctness of this outlook. The subterranean forces that have been percolating for years in a world of crisis and instability have finally made their way to the surface. The youth are right to worry about the menace to their lives. Millions instinctively understand that there is no solution to the question of gun violence—including school shootings, police brutality, and imperialist war—within a system based on oppression and exploitation. As a result, the stale bipartisan debate over gun control has been blown wide open. Into the breach have flooded demands that shed light on the fundamental nature of the crisis facing the youth and humanity as a whole, and which go far beyond this or that interpretation of the Second Amendment.

For example, a recent poll found that 66% of millennials aged 21 to 32 have nothing saved for retirement. CNN pointed to “stagnant wages” and “high unemployment” as the cause. But a follow-up article by Keith Spencer in Salon shows just how deep the discontent runs among the youth. Here are just a few quotes from millennials he interviewed:

“I don’t think the world can sustain capitalism for another decade… It’s socialism or bust.”

“Capitalism might still exist [in 2050], but I don’t expect people will be happy about it… If [capitalism] is replaced [by then], my ideal economic model is one where all basic necessities are abundant and free, everyone works a few hours a week at the necessary chores of society like garbage collection and machine maintenance, then has the rest of their lives free to pursue whatever projects—be they art, leisure, or industry—that they desire.”

“I just blew all my savings on a nine-month road trip on the assumption that something is going to change drastically in the next few years.”

“Not only am I not saving for retirement, I have never had a serious job because I have thought capitalism would be fucked by [the time I retired] since I was a teenager.”

Though youthful angst and existential crises are nothing new, this is not the smug cynicism of Generation X—a nihilistic, almost misanthropic pessimism that saw no alternative to the depressing grind of capitalist life. The youth of today are pessimistic about capitalism, not about humanity as a whole, and are wide open to alternatives beyond its bounds. Millions in Generation Z have no illusions in a society that is compelled to cut the essentials to the bone just as fabulous new technological horizons open up. And like the letter “Z” in the alphabet, which is followed by a new beginning on a higher level of comprehension, the present generation has a historic opportunity to lead humanity to a new beginning through the socialist revolution.

True to form, both conservative and liberal politicians and media are doing their utmost to co-opt the movement and drive it into safe channels. They are horrified at the prospect of having all that youthful energy aimed squarely at the capitalist roots of the crisis. The youth are deeply distrustful of the establishment, but in the absence of a mass socialist alternative, the pressure from above can have an effect and must be ferociously combatted. First and foremost, this means maintaining uncompromising clarity on the need for working-class political and organizational independence.

And it is not only the youth leading the charge. In West Virginia, the teachers put the movement back into labor in an inspiring wildcat upsurge that shook the cobwebs off decades of apparent complacency. Three-quarters of the strikers were women—among the most oppressed, underappreciated, and underpaid workers in the country. For thirteen days they audaciously challenged the “legality” of their actions, overcoming the concerted resistance of the state and their own union’s leadership. By building solidarity through both real world and virtual social networking, they shut down the public schools in all 55 counties of the state and won the support of the broader working class.

In a region rich with a history of bitter union battles, they proudly embraced the “redneck” label foisted upon them by their detractors—along with the class-struggle origins of that term. Winning a 5% raise through collective organization and mobilization that went beyond the bounds of what was “possible,” they raised the bar for American labor militancy in the 21st century. Their confident example quickly spread to influence workers in Oklahoma, New Jersey, Arizona, California, and beyond. 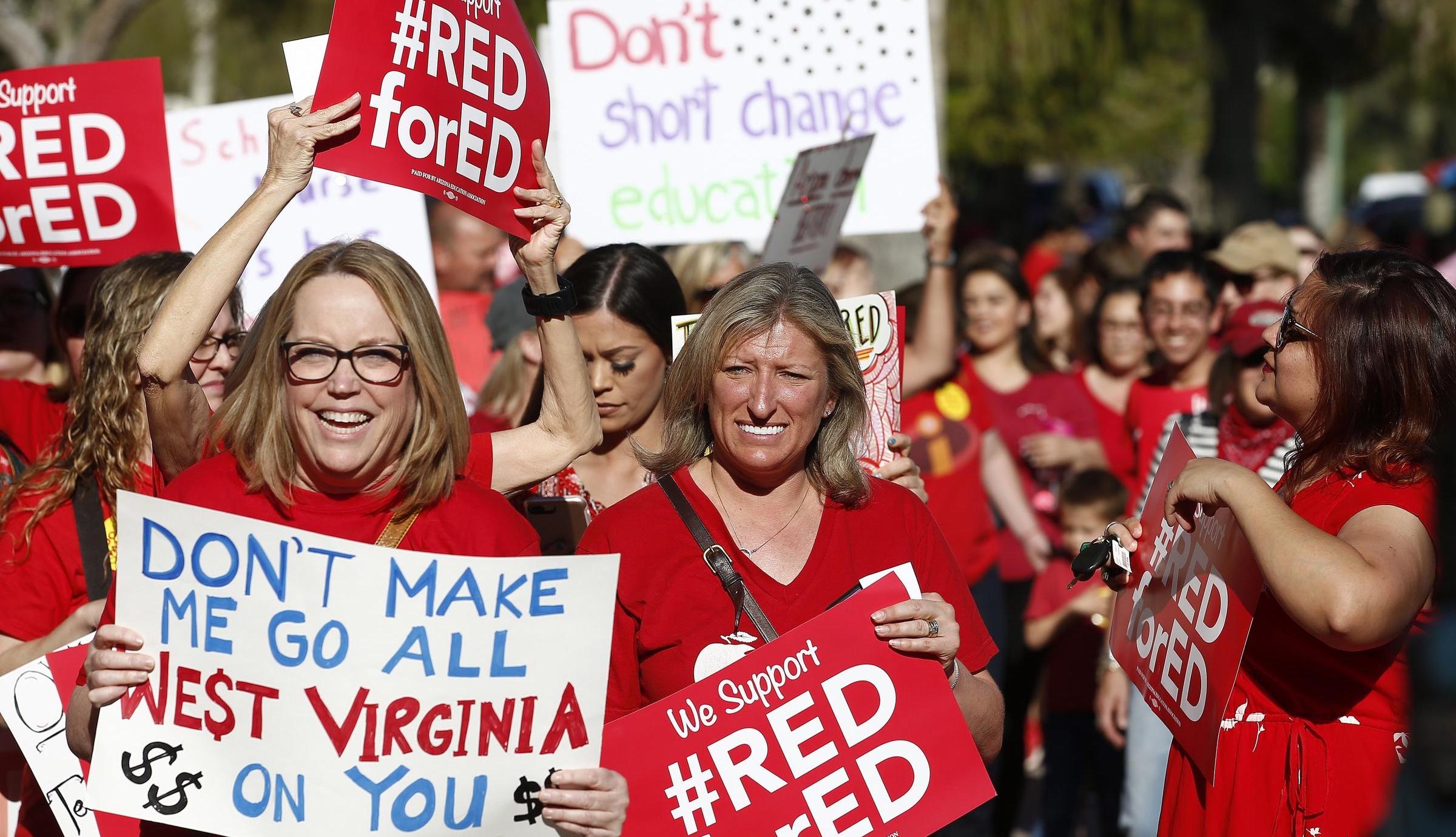 As always, the Democrats played their usual craven part, serving as duplicitous middlemen between the teachers and the Republican legislature. Now they seek to direct West Virginians’ anger into gains for their own party in the midterm elections. But the allegedly “backward” workers of this so-called “red” state showed the potential for a different kind of “red” among the millions voting against the status quo in 2016. Not only did all 55 counties in this part of Appalachia vote for Donald Trump in the general election, all 55 also picked Bernie Sanders in the Democratic primaries. Once given a lead, millions of US workers will jump right over the heads of the class-enemy Democrats and straight into the building of a mass socialist-labor party.

The events in West Virginia will echo throughout organized labor and politics for years to come. In a landscape littered with tinder, all it takes is a spark to light things up. The embers of West Virginia are smoldering, and the conditions for a general conflagration of labor struggle are more mature than they have been for decades.

Those on the Left who believe that revolutionaries should focus their energy on “base building” should look to the examples of West Virginia and the student movement. The idea that a select few must come to the rescue of the oppressed to “build” the mass movement one individual at a time is not only paternalistic but ignores a key lesson of history: Due to the built-in contradictions of the system, mass movements and even revolutionary situations will arise with or without revolutionaries. 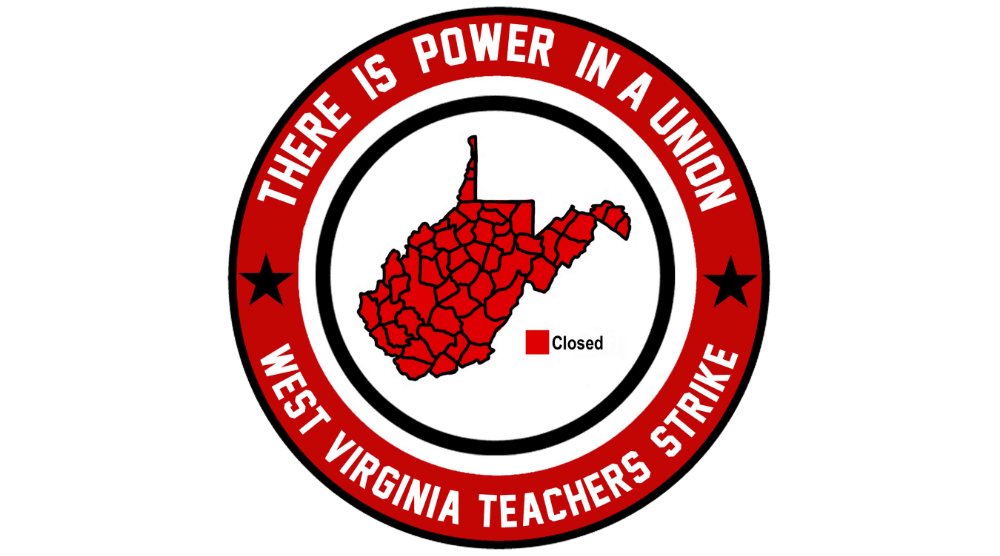 The working class has deep reserves of energy, creativity, and sacrifice, and will “storm heaven” time and again to change the world. But whether or not the workers succeed in channeling all of that energy into fundamental political, economic, and social change cannot be left to chance. The tragic lesson of the last century is that such a leadership cannot be improvised in the heat of the moment. Success depends on the selection and training in advance of a cadre of dedicated revolutionaries that can connect with the living struggles of the working class.

But to defeat the immense power of the capitalists, revolutionaries must not only be disciplined and organized—they must be steeped in the most advanced ideas and methods yet discovered by thinking humanity—the ideas of revolutionary Marxism. By understanding that social processes are dynamic and that similar conditions lead to similar results, Marxists seek to anticipate the broad outline of future events. But as the great American revolutionary Samuel Adams expressed it, “We cannot make events. Our business is wisely to improve them.”

The pessimists who just weeks ago mocked the idea of a mass upsurge by the workers and youth should take a long, hard look at the flawed premises of their arguments. The burgeoning labor and youth movements are still in their infancy but show that a one-sided interpretation of the immediate past is no indication of what is in store for the future. They are also proof that no matter how circuitous the path, the class question will always assert itself. The combination of organized labor and the youth fighting for a socialist program will be unstoppable.

The ocean’s water is at its cloudiest and most turbulent precisely when the tide begins to turn. All kinds of cross currents are swirling around us, trying to drag us under, threatening to exhaust our energies, and even drown us. To keep our bearings, we must hold firm against the influence of alien class ideas and methods in the movement. We must educate ourselves in the ideas of revolutionary Marxism and study the real history of Bolshevism. If you’re serious about socialism—not in the distant future, but in our lifetime—join the comrades of the International Marxist Tendency and let’s work together to bury this system once and for all.