The War and the Working Class 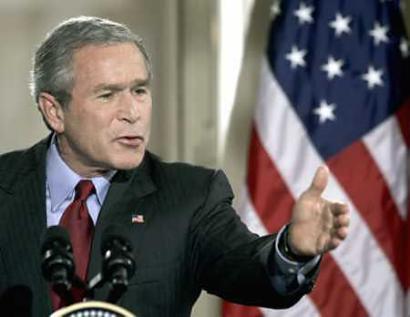 It is now official: George W. Bush is the most unpopular U.S. President in modern history. 71 percent of Americans say they “disapprove” of the job he is doing, while just 28 percent say they “approve.” The previous all-time low was set by Harry Truman in 1952, with 67 percent disapproval. In other words, Bush is even more unpopular than Richard Nixon in the days before he resigned from the presidency in August 1974.

Much of the discontent is due to the war in Iraq, which just 30 percent support, the lowest rating ever. Just a few months ago, in January, nearly half those polled believed “things were going well” in Iraq. Millions who formerly supported the war are now against it, especially as the economic effects of the war are coming home to roost.

The economy just barely sputtered along in the first quarter of 2008, while layoffs continues to grow, unemployment is rising, and the housing bust continues with no end in sight. In the first three months of 2008, foreclosures jumped 112 percent from a year earlier. To put that into perspective, in just 90 days, 650,000 more defaults, auction sales and bank repossessions were issued, crushing the “American Dream” of homeownership for hundreds of thousands of families. Some areas were hit harder than others. Massachusetts recorded a 260 percent increase, and in Stockton, CA a mostly poor, working class community, one in 30 homes was in foreclosure, nearly seven times the national average.

Despite federal and local government efforts to lessen the effects of this crisis, it is far from over. A record $362 billion in adjustable rate mortgages are due to reset to higher interest rates over the course of 2008. If recent experience is any indication, hundreds of thousands more will lose their homes, in what many analysts are now referring to as a “tsunami” of foreclosures.

No wonder the economy is now the number one issue of concern for voters as we head into the final stretch of the 2008 elections. Throughout 2007, the war was the main issue; now, the economy is number one, at 49 percent, compared to 19 percent who think the war is the number one issue. Inflation is a major concern, with 68 percent concerned about the rapidly rising price of gasoline, and 23 percent most concerned with rising food prices. All of these problems are interlinked and are hitting working people hardest.

So there is a lot of hope that a change of administration will mean a fundamental change in policy. The Democratic contenders emphasize “change” and  “hope,”  and even John McCain is in many ways presenting himself as an “Anyone But Bush” Republican. The Democrats have beat each other up over the last few months, but the process appears to be wrapping up, with Barack Obama their most likely nominee. Despite running unchallenged for the last few weeks, McCain still faces an uphill battle to win the presidency, given the unpopularity of the incumbent party. However, much can happen in the next few months, and the Democrats have proven themselves adept at “snatching defeat from the jaws of victory.”

McCain’s position on the war and U.S. foreign policy in general is no surprise. Since 1993 he has been the chair of the International Republican Institute, the international wing of the Republican Party and a major component of the so-called National Endowment for Democracy. The NED played a key role in the short-lived coup against Hugo Chavez’ government in 2002, and continues to work to destabilize and ultimately overthrow governments around the world that are deemed to be “unfriendly” to U.S. imperialism.

So it is natural that millions of Americans are looking to the “other party” in the hopes of changing course. In spite of the election-trail rhetoric, the real position of the two Democratic contenders is clear when it comes to defending the interests of U.S. imperialism. Clinton said her administration would “obliterate” Iran if it attacked Israel, and Obama endorsed the promotion of General Petraeus, architect of Bush’s “surge” in Iraq, to head of the U.S. Central Command. And while the U.S. military is more or less tied down in the Middle East for the moment, they are aggressively reasserting their power in Latin America, or as Obama referred to it, the United States’ “backyard.”

For the first time since 1950, the Pentagon is re-establishing the Fourth Fleet under command of the U.S. Navy and Southern Command. The fleet will be based in Florida, and will be responsible for Latin America and the Caribbean. The reason for reviving it is clear. After two “lost decades” during which millions sank ever deeper into poverty and misery, the masses of Latin America have reawakened to political consciousness and mobilization on a massive scale.

Venezuela is at the forefront of this process, which has been developing over the last ten years. On May Day, 2008, hundreds of thousands of Venezuelans marched against imperialism and in support of the government’s raising of the minimum wage by 30 percent. The key role of the Venezuelan working class in carrying the revolution all the way to genuine socialism was made clear. The masses are also on the move in Bolivia, where recently there were mass mobilizations against the illegal and fraudulent referendum on autonomy orchestrated by the Bolivian oligarchy and the U.S. State Department, in their effort to gain control over the wealthiest regions of the country. In Mexico, mass mobilizations against the privatization of PEMEX, the state-owned oil company, have shaken the right-wing PAN government in recent weeks. And in Paraguay, yet another left-leaning government has just been elected, ending 61 years of right-wing rule in that country.

The crisis of capitalism and ferment in Latin America is already being reflected in the U.S., through the immigrant workers’ movement. Despite the vicious repression and wave of terror unleashed since the truly massive mobilizations of two years ago, tens of thousands came out to demonstrate across the U.S. on May Day. Also on the first of May, the ILWU dockworkers on the West Coast organized an eight-hour work stoppage to protest the war, and later joined a march for immigrants’ rights.
Workers as far away as Iraq expressed their solidarity with the ILWU action, a glimpse of the power the international working class has to stop the war if it places itself at the head of the movement. The National Assembly to “Stop the War Now,” to be held in Cleveland on June 28 and 29 is another important example of the need for mass actions and maximum unity to end the war.

The economy, the war and the elections are all having an effect on the consciousness of American workers and young people. Contact the Workers International League to get involved in the struggle for a better world.