The War, the Economy, and the Elections

It has now been 5 years since the U.S. invasion of Iraq. The cost in lives, human suffering, and economic resources boggles the imagination. By the Pentagon’s  estimate, it has killed 37,500 civilians in Iraq. An independent polling agency puts the figure 32 times higher at over one million. Nearly 4,000 U.S. soldiers have been killed and another 30,000 wounded, many with permanent brain injury or amputations. This is just the tip of the iceberg and does not take into account the long-term effects of depleted uranium, post-traumatic stress, depression, suicides, etc.

In economic terms, the wars in Iraq and Afghanistan now cost $275 million each and every day. Nearly half a trillion dollars has been spent so far. That’s $4,100 for every household in America. According to a recent Congressional Research Service (CRS) report, the average monthly cost reached $10.3 billion in 2007, up from $4.4 billion in 2004. By the end of 2009, the cost of the Iraq and Afghanistan wars could reach $1 trillion. 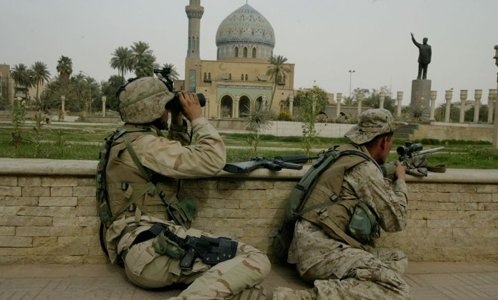 Even a country as wealthy as the United States cannot endure this drain forever. Every dollar spent on the war is a dollar not spent here at home on health care, education, affordable housing, jobs, or repairing the country’s decaying infrastructure. The effects of the war are directly felt here at home. And this is during a so-called economic boom.

The official declaration that the country has entered a recession usually doesn’t come until months after it actually begins, as the analysts from the National Bureau of Economic Research (NBER) look back over the facts and figures. But top economists from major Wall Street firms such as Merrill Lynch and Goldman Sachs think a tipping point into recession has already been reached.

Unemployment rose sharply in December to 5.0 percent, up from the cyclical low of 4.4 percent in March. Also, the economy slowed dramatically in the fourth quarter of 2007, growing by just 0.6 percent, with total growth for the year at just 2.2 percent, the worst figure since 2002. Never in the last 60 years has such a sharp rise in unemployment, combined with such low growth, not led to a recession.

The housing and credit crisis has begun to spread to the broader economy. Defaults for adjustable rate loans issued in 2007 hit 11.2 percent in November. This is twice the default rate for 2006. Most worrying is that none of these loans had yet “re-set” to the higher rate. This represents some 300,000 households, yet more people who will almost certainly lose their homes as a result of this crisis. Spending on new housing projects fell in 2007 by 16.9 percent, the worst fall in 25 years. And as reported by Reuters, the services sector, which accounts for over two-thirds of U.S. economic activity, fell sharply in January, to levels not seen since the 2001 recession. The Reuters/University of Michigan index of consumer sentiment fell to 69.6 in February from 78.4 in January, the lowest reading since February 1992. The index has only been this low during the recessions of the mid 1970s, the early 1980s and the early 1990s. 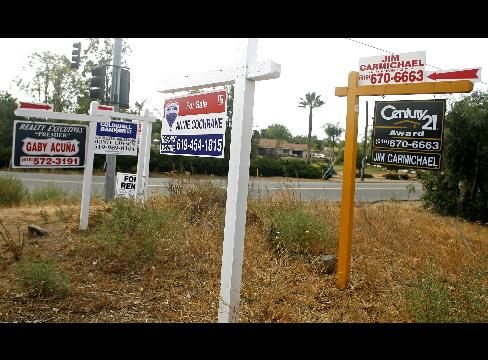 The Institute for Supply Management’s index for the non-manufacturing sector plummeted to 41.9 from 54.4 in December: a reading below 50 indicates contraction. The employment index fell to 43.9 from 51.8, corroborating the late January U.S. payrolls report, which showed the first net monthly contraction in the labor market in more than four years. While it is impossible to say exactly when or how deep or how long the slump will come, it already feels like it to millions of American workers.

This has already led to decreasing government revenues, and still Bush proposes a budget that tops $3 trillion for the first time in U.S. history. By Bush’s own estimates, it will lead to deficits of $410 billion in 2008 and $407 billion in 2009, bringing the overall Federal deficit to $5.9 trillion, up from $3.3 trillion when he took office. $2.3 trillion of this debt is held by foreign banks and investors.

The proposed budget would dramatically increase spending on the military and military aid to “key allies” around the world, in other words, countries that are actively repressing their own people to defend U.S. corporate interests. To pay for all of this, the government will have to further cut already depleted domestic programs such as Medicare and abolishing dozens of other social services programs.

Not surprisingly, the budget allocates $515 billion to the Defense Department, not including a separate request for billions more for the wars in Iraq and Afghanistan. Adjusted for inflation, this will be the largest military budget since World War II. This is a true “guns before butter” budget, an open declaration of increased militarism abroad and a further relentless attack on workers here at home. The American ruling class will expect more of the same ruthless cuts from the next Republican or Democrat to sit in the Oval Office. 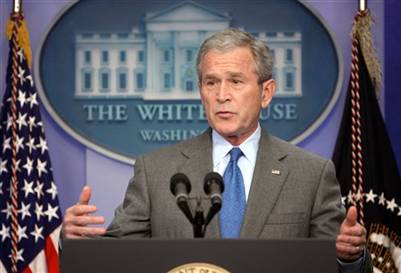 To add insult to injury, Bush’s economic stimulus plan to try and prevent the slide into recession includes $300 million for poor children in the inner cities: little more than what is spent in a single day on the wars in Iraq and Afghanistan. And if you do the math – $300 million divided by 15 million American children living in poverty – that’s a whopping $20 per child.

All of this is having an effect on Americans’ consciousness. In an election year, there are many people looking for an electoral solution to the serious and growing problems they face. While the Iraq War is still high on voters’ lists of concerns, the economy is now number one for voters of both main parties. Many youth in particular are looking to the Democrats, and especially to Barack Obama. The Republicans’ almost-certain candidate John McCain has staked his entire political future on continuing the war in Iraq. But do the Democrats’ candidates offer anything even closely approximating the majority of Americans’ demand to bring the troops home now?

Despite all the nice-sounding election year promises, the experience of the last five years clearly shows that we cannot depend on either the Republicans or Democrats to end the war. This is why the WIL is working with a wide coalition of organizations and individuals to help build a broad, united, and democratic anti-war movement, with the aim of organizing massive demonstrations in the coming months and years. We must also work energetically to build a political alternative to the duopoly of the Democrats and Republicans: a mass party of labor. Mass mobilizations and building a party of, by, and for working people is the only way to stop the war and improve our quality of life.

In an epoch of growing polarization and inequality, the next president will inevitably appeal for national and bi-partisan “unity”. In other words, he or she will call on American workers to subordinate their interests to the interests of the rich, to tighten their belts further in the interest of preserving the system that profits off of their labor. But as the “American Dream” is transformed into an “American Nightmare”, more and more people will begin to question the very system that leads to such instability.